“There is an improvement in the COVID situation in the country,” Aida Girma, UNICEF representative in Pakistan, told an online public event in Islamabad on Tuesday. “Across all indicators we are seeing improvement, and this is very encouraging. But it is too soon to celebrate. We can’t be complacent,” she warned. She also urged the government to redouble efforts ahead of Eidul Azha to ensure the gains Pakistan has made in the past few weeks are not lost.

The provincial government’s decision to shutter all shops and markets from July 28 till Aug. 5 in a bid to curb the spread of COVID-19 ahead of Eidul Azha provoked outrage from traders on Tuesday, as several shopkeepers defied the instructions and kept their shops operational. Demanding that the government reverse this decision, traders’ bodies have slammed it for inflicting “economic terrorism” on them.

On Wednesday, authorities reported 8 new deaths due to COVID-19, raising total fatalities to 2,133. The province also reported 173 new infections, raising confirmed cases to 94,452, against 82,512 recoveries. There are now 7,807 active cases of the virus in the province.

The provincial government extended till 11 p.m. the operational timings of cattle markets, as reports from interior Sindh suggested local transmission was once more on the rise in the province due to non-compliance with social distancing guidelines. According to hospital staff, Sukkur, Khairpur, Shikarpur and Larkana are among the cities that have recently witnessed an uptick in local transmission.

The provincial government has urged the public to avoid tourist hotspots ahead of, and during, Eidul Azha, with Chief Minister Mahmood Khan saying efforts are underway to reopen the tourism sector with SOPs after the festivities are concluded.

The provincial government on Wednesday reported 6 new deaths, raising its death toll to 1,186. In the past 24 hours, its recoveries rose by 528 to 27,724, while its confirmed cases have increased by 214 to 33,724. There are currently 4,814 active cases of coronavirus in the province. 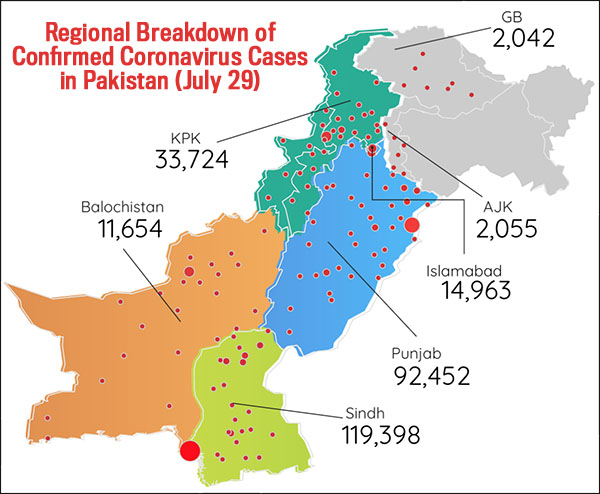 Provincial spokesman Liaquat Shahwani on Tuesday said the province had recorded its lowest positivity rate in the past 5 months, with only 3.2 percent of tests coming back positive for COVID-19. He said the recovery rate had also increased to 86.5 percent.

Confirmed cases of the novel coronavirus in the province on Wednesday rose by 30 to 11,654. Overall, 136 people have died and 10,080 patients have fully recovered from the virus, leaving 1,438 active cases of COVID-19.

Islamabad on Wednesday raised its confirmed coronavirus cases by 25 to 14,963. There were no new deaths or recoveries in the past 24 hours, sustaining death toll at 165 and recoveries at 12,377, leaving 2,421 active cases.

Confirmed cases of the novel coronavirus in Gilgit-Baltistan rose by 32 on Wednesday to 2,042. The region reported 2 new deaths, raising toll to 50, while its recoveries have increased by 45 to 1,658, leaving 334 active cases.

In Pakistan-administered Kashmir, confirmed cases have increased by 15 to 2,055. There was 1 death and 61 recoveries in the past 24 hours, leaving 50 fatalities and 1,543 fully recovered. It has 462 active cases of COVID-19.

Globally, the virus has now infected more than 16,897,200 people, with over 663,520 reported deaths. Governments across the word halted flights, locked down towns and cities and urged people to stay at home at the peak of the virus’s spread, but there are now signs of easements in nations that have reined it in to help shuttered economies recover. Overall, around 10,461,315 patients of the 16.8 million+ infected have recovered thus far.