Pakistan on Thursday reported 1,302 infections of the novel coronavirus after conducting 32,376 tests—a positivity ratio of 4.02 percent.

Federal Education Minister Shafqat Mahmood on Thursday chaired a meeting of provincial education ministers and announced that the COVID-19 situation was “under control” and no educational institutions would be shut to curb the spread of the virus. He announced that reports of schools and colleges being shut down were “absolutely false,” and claimed adoption of SOPs was sufficient to prevent the pandemic from surging. 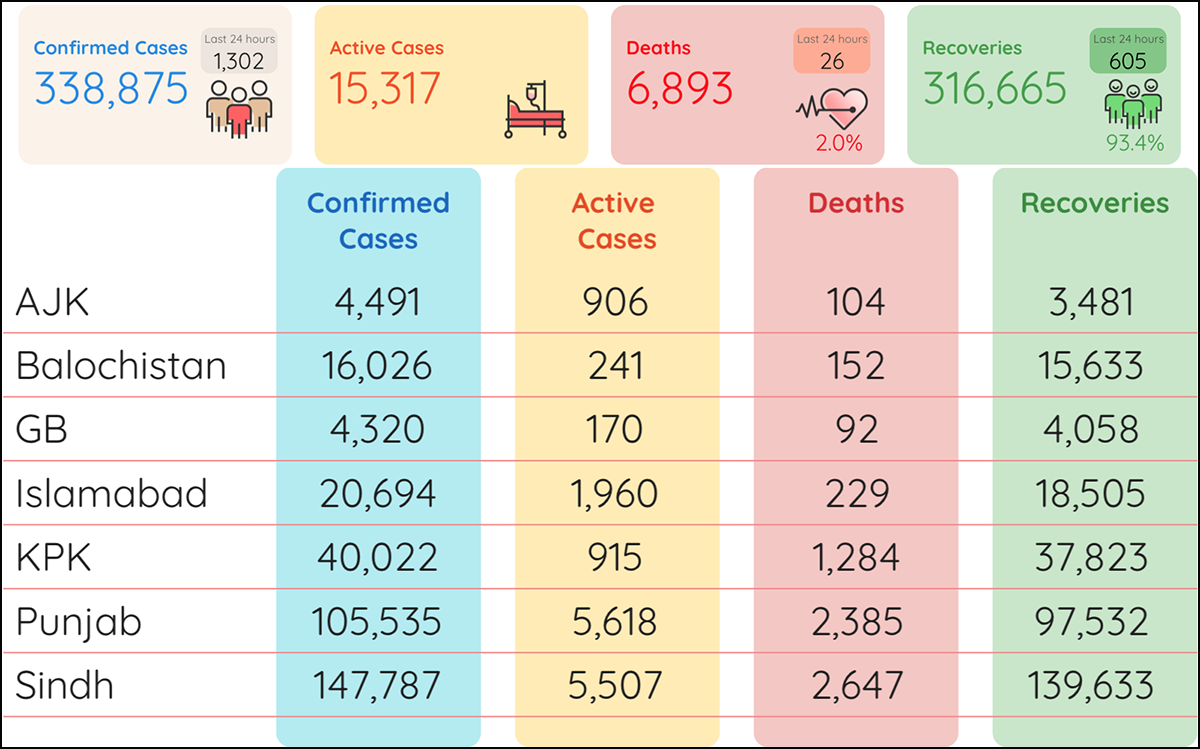 On Thursday, authorities reported 5 new deaths due to COVID-19, raising fatalities to 2,385. The province raised its confirmed cases to 105,535 with 338 new infections after conducting 11,875 tests. Meanwhile, its recoveries have increased by 17 to 97,532. There are now 5,618 active cases of the virus in the province.

The provincial government on Thursday reported 3 death, raising toll to 1,284. In the past 24 hours, its recoveries rose by 19 to 37,823 while its confirmed cases have increased by 133 to 40,022 after conducting 2,813 tests. The province currently has 915 active cases of coronavirus.

The province on Thursday raised its confirmed cases to 16,026 with 26 new infections after conducting 598 tests. There were no new deaths and 14 recoveries in the past 24 hours, leaving 152 fatalities and 15,633 recoveries. There are now 241 active cases of COVID-19 in the province.

Confirmed cases of the novel coronavirus in Gilgit-Baltistan on Thursday increased by 14 to 4,320 after conducting 405 tests. The region reported no new deaths and 18 recoveries, leaving 92 fatalities and 4,058 recoveries. There are currently 170 active cases of COVID-19 in the region.

Globally, the virus has now infected more than 48,479,576 people, with over 1,231,699 reported deaths. Governments across the word halted flights, locked down towns and cities and urged people to stay at home at the peak of the virus’s spread, but have since eased restrictions to help shuttered economies rebound. With a second wave now emerging, countries with new spikes have started to re-impose movement restrictions. Overall, around 34,701,919 patients of the 48.4 million+ infected have recovered thus far.