Pakistan on Wednesday reported 1,313 infections of the novel coronavirus after conducting 26,565 tests—a positivity ratio of 4.94 percent.

Prime Minister Imran Khan on Tuesday reiterated his longstanding view that Pakistan cannot afford another lockdown and urged citizens to wear face masks in public to curb the spread of the novel coronavirus and protect lives and livelihoods. He told a federal cabinet meeting that the provincial governments should implement more “smart” lockdowns and improve their testing and tracking to reduce the spread. 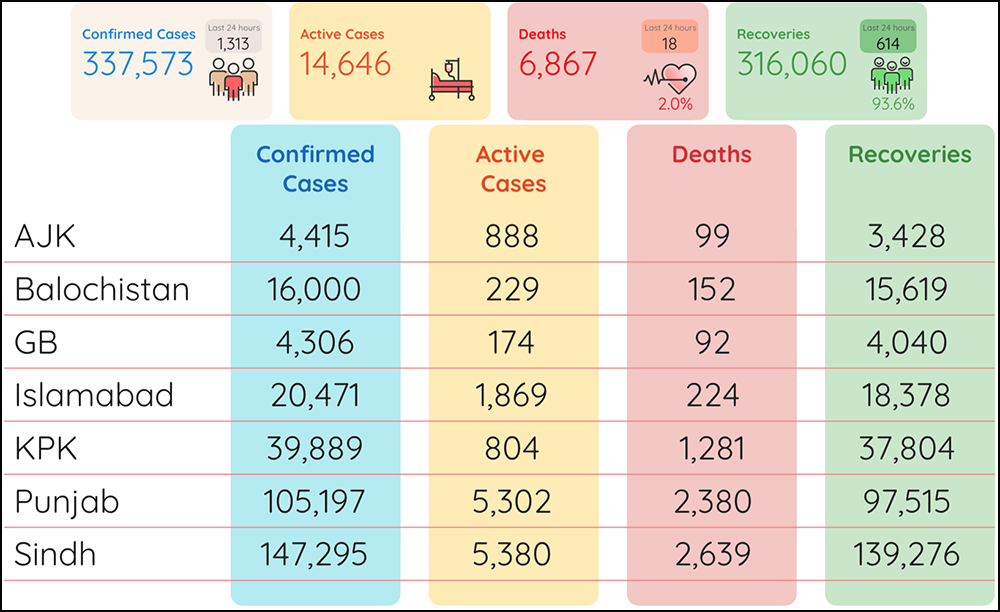 On Wednesday, authorities reported 8 new deaths due to COVID-19, raising fatalities to 2,380. The province raised its confirmed cases to 105,197 with 303 new infections after conducting 10,644 tests. Meanwhile, its recoveries have increased by 17 to 97,515. There are now 5,302 active cases of the virus in the province.

The provincial government on Wednesday reported 1 death, raising toll to 1,281. In the past 24 hours, its recoveries rose by 113 to 37,804 while its confirmed cases have increased by 140 to 39,889 after conducting 3,599 tests. The province currently has 804 active cases of coronavirus.

The province on Wednesday raised its confirmed cases to 16,000 with 23 new infections after conducting 540 tests. There were no new deaths and 28 recoveries in the past 24 hours, leaving 152 fatalities and 15,619 recoveries. There are now 229 active cases of COVID-19 in the province.

Confirmed cases of the novel coronavirus in Gilgit-Baltistan on Wednesday increased by 13 to 4,306 after conducting 402 tests. The region reported no new deaths and 23 recoveries, leaving 92 fatalities and 4,040 recoveries. There are currently 174 active cases of COVID-19 in the region.

Globally, the virus has now infected more than 47,853,633 people, with over 1,220,534 reported deaths. Governments across the word halted flights, locked down towns and cities and urged people to stay at home at the peak of the virus’s spread, but have since eased restrictions to help shuttered economies rebound. With a second wave now emerging, countries with new spikes have started to re-impose movement restrictions. Overall, around 34,357,190 patients of the 47.8 million+ infected have recovered thus far.