Pakistan on Friday reported 1,376 infections of the novel coronavirus after conducting 35,745 tests—a positivity ratio of 3.85 percent.

Despite the Tablighi Jamaat being a proven spreading event in March—helping distribute the coronavirus pandemic throughout the country while cases were still in double digits—the government has permitted it to go ahead once more in Lahore, in seeming disregard of the ongoing second wave. In a statement, the PTI-led government in Punjab said the event would proceed in Lahore from today (Friday), and last 3 days. It said that 54,000 participants from across the country would attend, though no one from outside the country would be allowed to participate this year.

Pakistan’s health authorities have been sounding the alarm about a second wave of the virus for several weeks now. Daily infections and deaths are once more on the rise, raising fears that disease is making a comeback as the public becomes more apathetic toward social distancing measures. Meanwhile, the country has yet to fully utilize its claimed testing capacity of 73,572 and is currently testing significantly below numbers proposed by global health experts. According to WHO, Pakistan’s testing policies likely only record the most symptomatic patients while ignoring the spread among asymptomatic carriers, which recent studies have suggested comprise the majority of infections in the country. 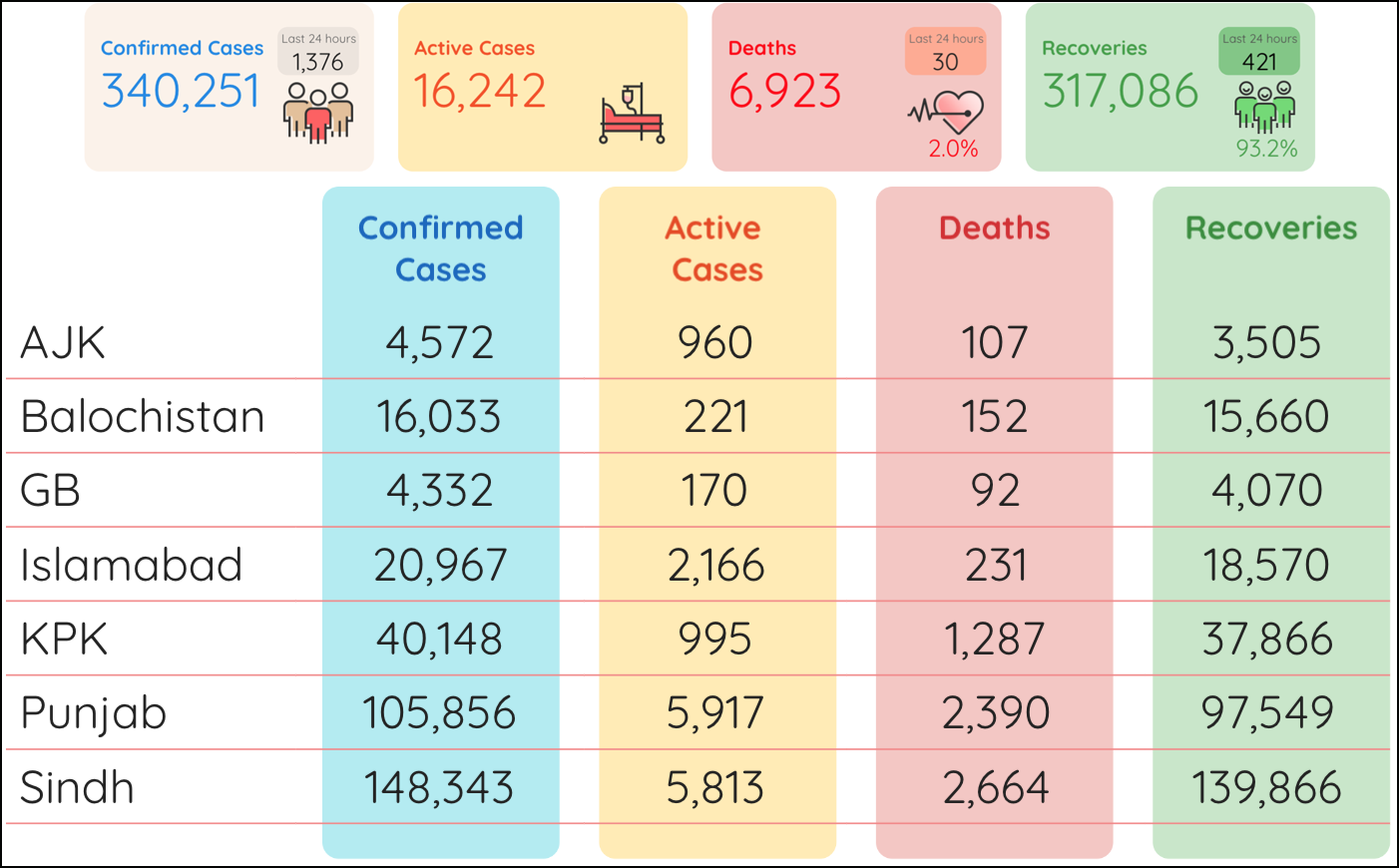 On Friday, authorities reported 5 new deaths due to COVID-19, raising fatalities to 2,390. The province raised its confirmed cases to 105,856 with 321 new infections after conducting 14,109 tests. Meanwhile, its recoveries have increased by 17 to 97,549. There are now 5,917 active cases of the virus in the province.

The provincial government on Friday reported 3 deaths, raising toll to 1,287. In the past 24 hours, its recoveries rose by 43 to 37,866 while its confirmed cases have increased by 126 to 40,148 after conducting 3,219 tests. The province currently has 995 active cases of coronavirus.

The province on Friday raised its confirmed cases to 16,033 with 7 new infections after conducting 161 tests. There were no new deaths and 27 recoveries in the past 24 hours, leaving 152 fatalities and 15,660 recoveries. There are now 221 active cases of COVID-19 in the province.

Confirmed cases of the novel coronavirus in Gilgit-Baltistan on Friday increased by 12 to 4,332 after conducting 410 tests. The region reported no new deaths and 12 recoveries, leaving 92 fatalities and 4,070 recoveries. There are currently 170 active cases of COVID-19 in the region.

Globally, the virus has now infected more than 49,035,014 people, with over 1,239,660 reported deaths. Governments across the word halted flights, locked down towns and cities and urged people to stay at home at the peak of the virus’s spread, but have since eased restrictions to help shuttered economies rebound. With a second wave now emerging, countries with new spikes have started to re-impose movement restrictions. Overall, around 34,984,442 patients of the 49 million+ infected have recovered thus far.