Special Assistant to the P.M. on Health Dr. Zafar Mirza has warned that while there has been a noticeable decline in new infections of COVID-19, the “challenge is not over yet.” He called for caution on Eidul Azha, warning that officials and citizens both have to work twice as hard to prevent the virus from spreading during the festivities.

Law minister Basharat Raja on Friday met a delegation from the Punjab Restaurants Association and assured them that the government was looking to allow dining in at eateries after Eidul Azha. He said standard operating procedures to curb the spread of COVID-19 would have to be implemented but reiterated that the government was aware of the problems being faced by the industry.

On Saturday, authorities reported 8 new deaths due to COVID-19, raising total fatalities to 2,113. The province also reported 268 new infections, raising confirmed cases to 91,691, against 81,241 recoveries. There are now 8,337 active cases of the virus in Punjab province.

Provincial spokesperson Murtaza Wahab on Friday said more than 100,000 COVID-19 patients in the province had thus far recovered, comprising around 86 percent of total infections. In a posting on Twitter, he said Karachi remained the worst affected district of the province.

The provincial Home and Tribal Affairs Department on Friday issued a notification urging citizens to practice collective sacrifice through reputed organizations instead of obtaining individual animals from cattle markets, which could potentially increase the risk of the spread of COVID-19. It also said that the SOPs decided by ulema for Eidul Fitr should be followed in letter and spirit for Eidul Azha.

The provincial government on Saturday reported 1 new death, raising its death toll to 1,170. In the past 24 hours, its recoveries rose by 262 to 26,869, while its confirmed cases have increased by 173 to 33,071. There are currently 5,032 active cases of coronavirus in the province. 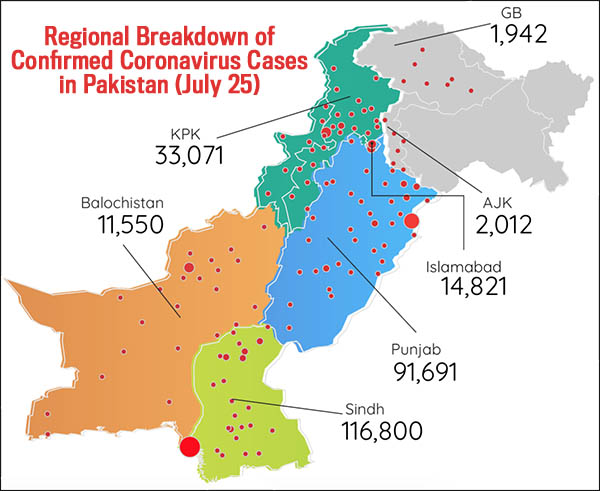 For the third consecutive day, the province reported no new deaths due to COVID-19, with provincial spokesman Liaquat Shahwani crediting this to the public’s adoption of SOPs introduced to curb the spread of the disease. However, senior officials have warned that the province is likely not recording all deaths caused by the virus, as it is difficult to ascertain accurate information from remote areas.

Confirmed cases of the novel coronavirus in the province on Saturday rose by 27 to 11,550. Overall, 136 people have died and 9,899 patients have fully recovered from the virus, leaving 1,515 active cases of COVID-19.

Islamabad on Saturday raised its confirmed coronavirus cases by 55 to 14,821. There were no new deaths and 116 new recoveries in the past 24 hours, sustaining death toll at 162 and raising recoveries to 12,139, leaving 2,520 active cases.

Confirmed cases of the novel coronavirus in Gilgit-Baltistan rose by 24 on Saturday to 1,942. The region reported 1 new death, raising toll to 47, while its recoveries have increased by 15 to 1,548, leaving 347 active cases.

In Pakistan-administered Kashmir, confirmed cases have increased by 23 to 2,012. There were no new deaths and 48 recoveries in the past 24 hours, leaving 49 fatalities and 1,409 fully recovered. It has 554 active cases of COVID-19.

Globally, the virus has now infected more than 15,941,800 people, with over 642,750 reported deaths. Governments across the word halted flights, locked down towns and cities and urged people to stay at home at the peak of the virus’s spread, but there are now signs of easements in nations that have reined it in to help shuttered economies recover. Overall, around 9,724,280 patients of the 15.9 million+ infected have recovered thus far.