Pakistan on Thursday reported 1,808 infections of the novel coronavirus after conducting 36,686 tests—a positivity ratio of 4.93 percent.

The National Command and Operation Center (NCOC) on Wednesday advised the government to immediately implement a ban on large public gatherings to curb the spread of the novel coronavirus. The forum noted there had been a threefold increase in daily infections, and advised shutting cinemas and religious shrines, as well as reducing operational hours of markets and bazaars. 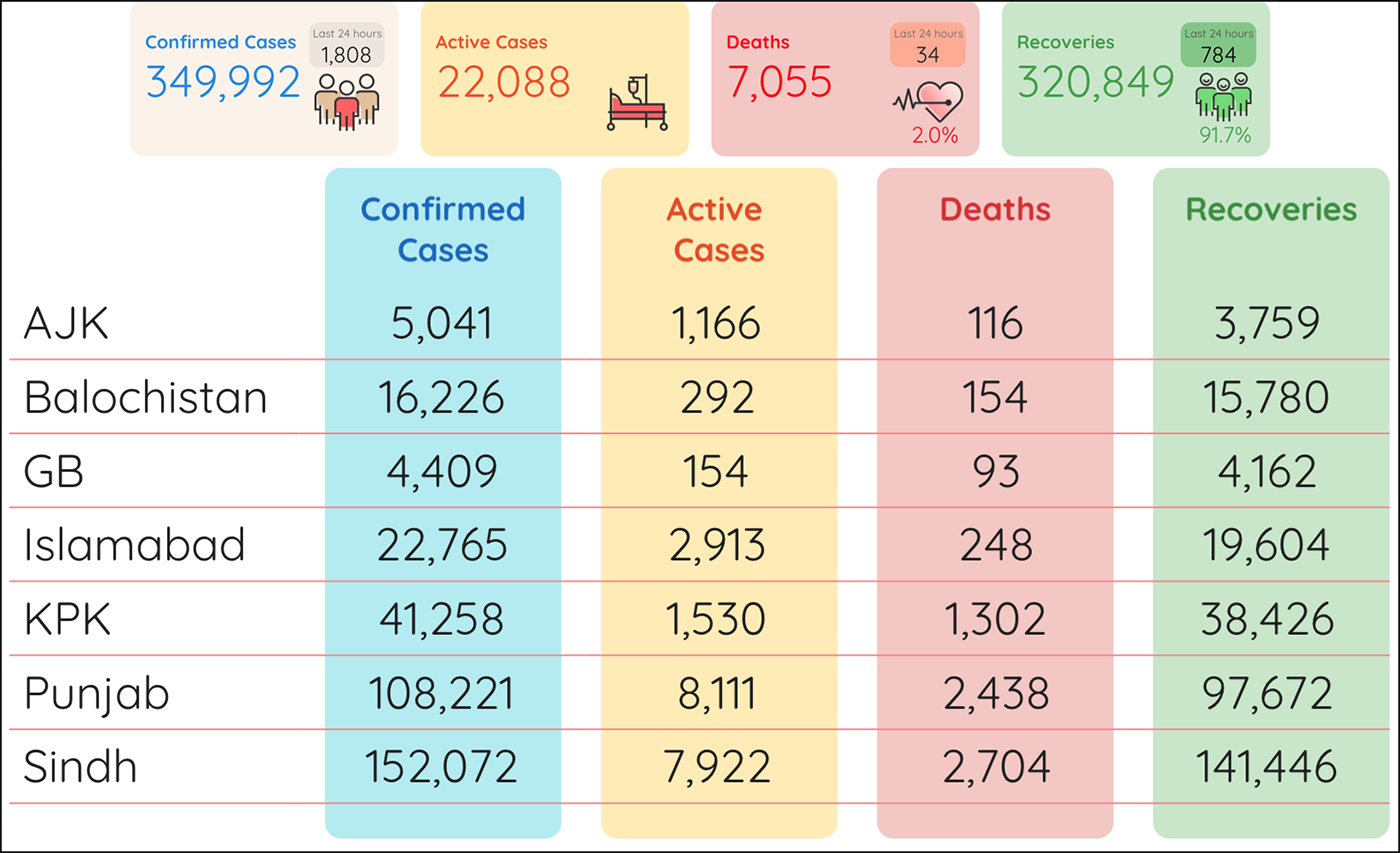 On Thursday, authorities reported 9 new deaths due to COVID-19, raising fatalities to 2,438. The province raised its confirmed cases to 108,221 with 390 new infections after conducting 13,545 tests. The province reported no new recoveries, leaving 97,672 fully recovered, and now has 8,111 active cases of the virus.

The provincial government on Thursday reported 8 deaths, raising toll to 1,302. In the past 24 hours, its recoveries rose by 84 to 38,426 while its confirmed cases have increased by 189 to 41,258 after conducting 3,303 tests. The province currently has 1,530 active cases of coronavirus.

The province on Thursday raised its confirmed cases to 16,226 with 31 new infections after conducting 482 tests. There were no new deaths and 37 recoveries in the past 24 hours, leaving 154 fatalities and 15,780 recoveries. There are now 292 active cases of COVID-19 in the province.

Confirmed cases of the novel coronavirus in Gilgit-Baltistan on Thursday increased by 15 to 4,409 after conducting 345 tests. The region reported no new deaths and 6 recoveries, leaving 93 fatalities and 4,162 recovered. There are currently 154 active cases of COVID-19 in the region.

Globally, the virus has now infected more than 52,440,433 people, with over 1,289,730 reported deaths. Governments across the word halted flights, locked down towns and cities and urged people to stay at home at the peak of the virus’s spread, but have since eased restrictions to help shuttered economies rebound. With a second wave now emerging, countries with new spikes have started to re-impose movement restrictions. Overall, around 36,676,552 patients of the 52.4 million+ infected have recovered thus far.