Pakistan on Tuesday recorded 1,979 new infections of the novel coronavirus after conducting 21,020 tests—a positivity ratio of 9.4 percent, the lowest in over two months.

The National Command and Operation Center (NCOC) on Monday decided that it would follow the same plan that had been devised for Eidul Fitr prayers for Eidul Azha prayers. In a meeting in Lahore, it was also revealed that there would be around 700 cattle markets in operation across Pakistan on the eve of Eidul Azha, with officials being directed to ensure standard operating procedures (SOPs) were strictly enforced.

The provincial government on Monday announced it would commence ‘smart sampling’ at all jails in the province to “detect and determine” the spread of COVID-19. Previously, the government had maintained that there were no infections within prisons due to the lockdowns, which had prevented inmates from meeting any visitors.

On Tuesday, authorities reported 13 new deaths due to COVID-19, raising total fatalities to 2,026. The province also reported 449 new infections, raising confirmed cases to 87,492, against 63,977 recoveries. There are now 21,489 active cases of the virus in Punjab province.

Adviser to the C.M. on Law Murtaza Wahab on Monday said that the province had the highest testing capacity in the country, noting that it was conducting 12,004 tests per million against Punjab’s 5,427 tests per million, Balochistan’s 4,348 and Khyber-Pakhtunkhwa’s 4,952.

He claimed the reduced testing capacity had resulted in fewer new infections being reported nationwide. “We need to make a concerted effort to prevent the spread of the corona virus as the coronavirus epidemic has taken a global toll,” he warned.

A report issued by the World Health Organization has revealed that Bajaur and Swabi districts have the highest case fatality rate of the province, with 6 percent of infections resulting in fatalities. Provincial capital Peshawar, along with Battagram, Nowshera, Kohat, Mardan, Abbottabad and Hangu trail in second with a 5 percent fatality rate.

The provincial government on Tuesday reported 7 new deaths, raising its death toll to 1,106. In the past 24 hours, its recoveries rose to 21,312, while its confirmed cases have increased by 261 to 30,747. There are currently 8,329 active cases of coronavirus in the province. 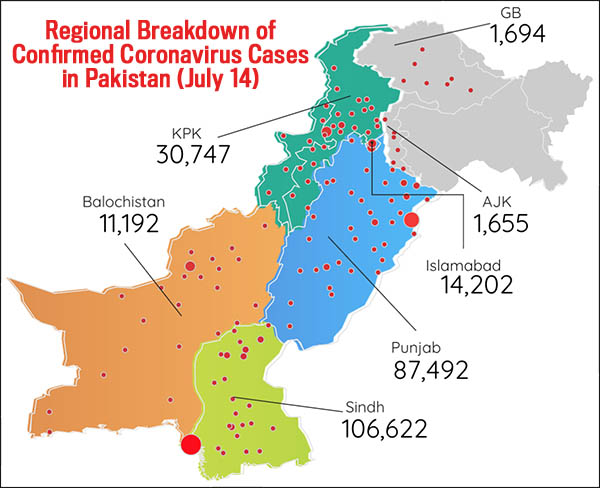 The province reported a sharp decrease in new infections on Monday, having gone down from hundreds of new cases daily to just 7.

Confirmed cases of the novel coronavirus in the province on Tuesday rose by 7 to 11,192. Overall, 126 people have died and 7,812 patients have fully recovered from the virus, leaving 3,254 active cases of COVID-19.

Islamabad on Tuesday raised its confirmed coronavirus cases by 94 to 14,202. There were 2 deaths in the past 24 hours, while 444 more people have fully recovered. Overall, 155 people have died due to COVID-19 in the federal capital against 11,327 recoveries, leaving 2,720 active cases of COVID-19.

Confirmed cases of the novel coronavirus in Gilgit-Baltistan rose by 23 on Tuesday to 1,694. The region reported no new deaths, sustaining toll at 36, while its recoveries have increased by 51 to 1,370, leaving 288 active cases.

In Pakistan-administered Kashmir, confirmed cases have increased by 56 to 1,655. There was 1 new death and 51 recoveries in the past 24 hours, leaving 45 fatalities and 1,029 fully recovered. It has 581 active cases of COVID-19.

Globally, the virus has now infected more than 13,238,121 people, with over 575,545 reported deaths. Governments across the word halted flights, locked down towns and cities and urged people to stay at home at the peak of the virus’s spread, but there are now signs of easements in nations that have reined it in to help shuttered economies recover. Overall, around 7,698,371 patients of the 13.2 million+ infected have recovered thus far.