Pakistan on Tuesday reported 2,050 infections of the novel coronavirus after conducting 29,378 tests—a positivity ratio of 7.06 percent.

Prime Minister Imran Khan on Monday announced a ban on all political rallies and gatherings that do not provide any economic benefit in a bid to curb the spread of coronavirus. He reiterated his calls for the public not to step outside their homes without face masks, and stressed that the government would not take any actions that would negatively impact the economy. 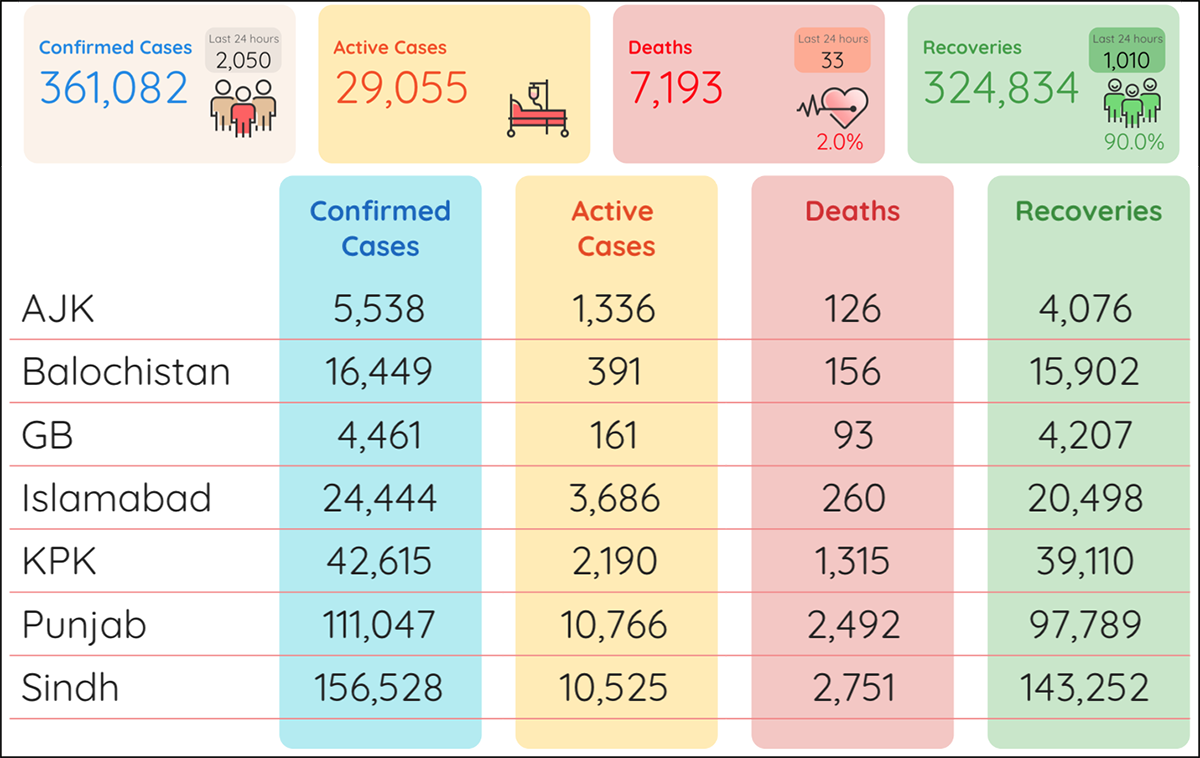 On Tuesday, authorities reported 17 new deaths due to COVID-19, raising fatalities to 2,492. The province raised its confirmed cases to 111,047 with 597 new infections after conducting 12,032 tests. The province reported 13 new recoveries, leaving 97,789 fully recovered, and now has 10,766 active cases of the virus.

The province on Tuesday raised its confirmed cases to 16,449 with 42 new infections after conducting 356 tests. There were no new deaths and 50 recoveries in the past 24 hours, leaving 156 fatalities and 15,902 recoveries. There are now 391 active cases of COVID-19 in the province.

Confirmed cases of the novel coronavirus in Gilgit-Baltistan on Tuesday increased by 9 to 4,461 after conducting 302 tests. The region reported no new deaths and 4 recoveries, leaving 93 fatalities and 4,207 recovered. There are currently 161 active cases of COVID-19 in the region.

Globally, the virus has now infected more than 55,349,529 people, with over 1,332,328 reported deaths. Governments across the word halted flights, locked down towns and cities and urged people to stay at home at the peak of the virus’s spread, but subsequently eased restrictions to help shuttered economies rebound. With a second wave now emerging, countries with new spikes have started to re-impose movement restrictions. Overall, around 38,493,441 patients of the 55.3 million+ infected have recovered thus far.