Various international airlines, including Qatar Airways, Etihad Airways, and Emirates Airlines have made coronavirus tests mandatory for passengers flying out of Pakistan. According to guidelines issued by the airlines, travelers would be required to submit test results from no earlier than 96 hours before boarding any flights.

While there have been notes of optimism due to Pakistan’s continuously declining positivity rate, health experts continue to warn that the country is still testing far below its claimed capacity of 71,780—and significantly below the numbers proposed by global health experts—and is likely only recording the most symptomatic patients while ignoring the spread among asymptomatic carriers. The government has dismissed these concerns, claiming Pakistan’s “comparatively low” death toll proves its policies are working.

Health Minister Dr. Yasmin Rashid on Wednesday said the number of people recovering from the virus daily was now exceeding the number of new infections, and hailed front-line healthcare workers for their hard work and dedication in achieving this. Meanwhile, the provincial health department announced it would start sending the results of COVID-19 tests conducted in state-run hospitals directly to patients via SMS.

On Thursday, authorities reported 8 new deaths due to COVID-19, raising total fatalities to 2,051. The province also reported 494 new infections, raising confirmed cases to 88,539, against 64,247 recoveries. There are now 22,241 active cases of the virus in Punjab province.

The provincial government on Wednesday extended its ongoing lockdown restrictions for one month, until Aug. 15. According to a notification issued by the Sindh Home Department, all recreational venues including parks, beaches, cinemas would remain closed to the general public. Similarly, a ban on large public gatherings of all types has also been retained.

Lawmakers of the provincial assembly this week advised reopening crossing points along the Pak-Afghan border for the public, as well as popular tourist sites, to boost economic activities in the province. Prime Minister Imran Khan has also repeatedly urged the provincial governments to resume tourism with SOPs.

The provincial government on Thursday reported 6 new deaths, raising its death toll to 1,120. In the past 24 hours, its recoveries rose to 22,260, while its confirmed cases have increased by 216 to 31,217. There are currently 7,837 active cases of coronavirus in the province. 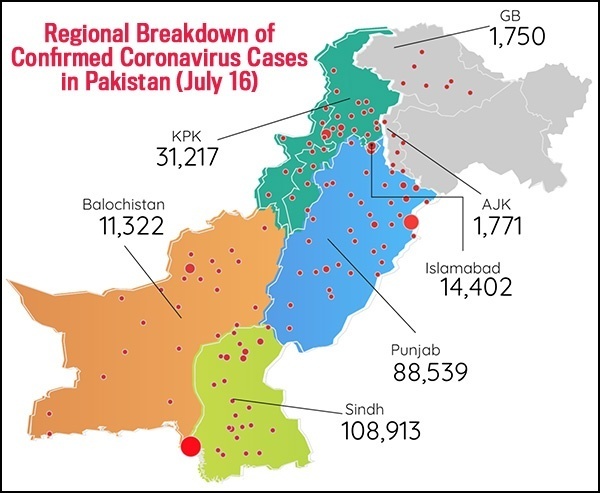 The provincial government on Wednesday announced it was extending the ongoing “smart lockdown” until July 30 in a bid to control the spread of the novel coronavirus. A notification issued by the home department said that all guidelines for social distancing and other precautionary measures would continue to be enforced, as despite a decline in new infections, the province is not yet free of the deadly disease.

Confirmed cases of the novel coronavirus in the province on Thursday rose by 83 to 11,322. Overall, 127 people have died and 8,002 patients have fully recovered from the virus, leaving 3,193 active cases of COVID-19.

Confirmed cases of the novel coronavirus in Gilgit-Baltistan rose by 42 on Thursday to 1,750. The region reported no new deaths, sustaining toll at 38, while its recoveries have increased by 13 to 1,389, leaving 323 active cases.

In Pakistan-administered Kashmir, confirmed cases have increased by 83 to 1,771. There were no new deaths and 12 recoveries in the past 24 hours, leaving 46 fatalities and 1,061 fully recovered. It has 664 active cases of COVID-19.

Globally, the virus has now infected more than 13,692,600 people, with over 586,839 reported deaths. Governments across the word halted flights, locked down towns and cities and urged people to stay at home at the peak of the virus’s spread, but there are now signs of easements in nations that have reined it in to help shuttered economies recover. Overall, around 8,148,524 patients of the 13.6 million+ infected have recovered thus far.