Confirmed infections of COVID-19 in Pakistan soared to 34,336 on Wednesday after the country recorded 2,255 new cases—its highest single-day jump in a single day thus far.

Over the past 24 hours, Pakistan has recorded 31 new deaths and 257 recoveries, raising the total fatalities to 737 and overall recoveries to 8,812, respectively. Nationwide, there are now 24,787 active cases of the novel coronavirus, 1,967 more than a day earlier.

National Assembly Speaker Asad Qaiser on Tuesday night confirmed that he was now negative for the coronavirus, becoming the latest prominent recovery from the virus. A few hours later, Sindh Governor Imran Ismail also confirmed that he had now tested negative for the disease. Meanwhile, the incumbent Pakistan Tehreek-e-Insaf and the opposition faced off in the Senate, where senators from the JI, PPP and PMLN accused the government of playing with lives by easing lockdowns while the number of cases in Pakistan are still on the rise.

Despite Prime Minister Imran Khan repeatedly criticizing the concept of lockdowns—at one point even alleging it only benefited the ‘elite’—the federal government is now trying to paint itself as having run out of options and having been “forced” to make a “tough” decision to ease movement restrictions. This is not accurately reflected by statements issued by either the prime minister or members of his federal cabinet about the coronavirus situation in the past two months.

In a press conference on Tuesday, doctors in Karachi urged people to celebrate the upcoming Eidul Fitr with simplicity and avoid meeting people outside their own families. They also warned that a harsher, “second” wave of the virus could hit Pakistan if people did not follow preventative measures designed to curb its spread.

The province on Wednesday reached 13,225 confirmed cases of the novel coronavirus against a death toll of 214. Thus far, the province has also reported 4,531 recoveries, leaving 8,480 active cases, the second highest in the country after Sindh, which has 10,163 active cases.

Lahore has been described as the epicenter of the coronavirus in Punjab, and in a bid to free up some space in quarantine centers, the provincial government on Tuesday issued its guidelines for home isolation of patients with mild symptoms of COVID-19.

Meanwhile, amidst outrage over blatant violations of preventative measures in markets across the province, Industries and Trade Minister Mian Aslam Iqbal warned that if the standard operating procedures continued to be flouted, the government would have no choice but to re-imposed lockdown restrictions.

Provincial Education Minister Saeed Ghani on Tuesday warned parents that schools there might not open for six more months, adding that a new, online curriculum was being developed for the interim. Confirming that schools would not reopen on June 1, he said a new date would be notified at a later time. The federal government last week announced that schools would remain shut until July 15.

The total number of confirmed COVID-19 cases in Sindh, meanwhile, rose to 12,610. Additionally, the province raised its casualties to 218, while its recoveries rose to 2,229. Overall, the province now has 10,163 active cases of the novel coronavirus, 495 more than a day earlier. 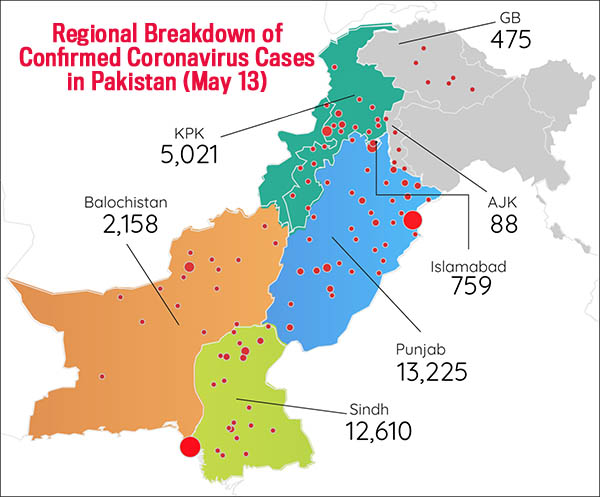 At least 146 doctors of the province have now been infected with the coronavirus, with dozens more nurses, paramedics and technicians also suffering. Healthcare professionals continue to warn that the country’s healthcare infrastructure would not be able to cope with the virus if it continues to spread this rapidly, and have urged the government to strengthen restrictions—largely in vain.

The province also continues to report the highest fatality rate in Pakistan, reaching 267 deaths on Wednesday morning. Overall, the province has now recorded 5,021 confirmed cases of the novel coronavirus, with 1,305 recoveries.

The province has thus far reported 2,158 confirmed cases of the novel coronavirus, with 27 deaths and 256 recoveries. It currently has 1,875 active cases of COVID-19.

The provincial health department on Tuesday warned that 92 percent of all cases were a result of local transmission, with the government once again urging people to adopt social distancing guidelines, as well as advising them to celebrate Eid with simplicity and without any unnecessary travel.

Islamabad on Wednesday raised its confirmed COVID-19 infections to 759, with 6 deaths and 92 recoveries. Presently, the Islamabad Capital Territory has 661 active cases of the novel coronavirus.

In Gilgit-Baltistan, cases of the novel coronavirus rose to 475, with no new deaths and 11 new recoveries. Overall, it now has 4 deaths and 331 recoveries, leaving 140 active cases.

In Pakistan-administered Kashmir, the total number of confirmed cases has increased to 88. The region has recorded no new deaths and 4 new recoveries in the past 24 hours. It currently has 1 death and 68 recoveries, leaving 19 active cases of the virus.

Globally, the virus has now infected more than 4,342,500 people, with over 292,890 reported deaths. Governments across the world have halted flights, locked down towns and cities and urged people to stay at home, but there are signs of easements to help shuttered economies recover. Overall, around 1,602,475 patients of the 4.3 million+ infected have recovered thus far.