The National Institute of Health on Friday issued social distancing guidelines for Eidul Azha to curb the spread of COVID-19. According to the standard operating procedures provided, citizens have been urged to exercise caution during Eid prayers and to take extra care at cattle markets, which are often crowded and could result in a new surge in infections. 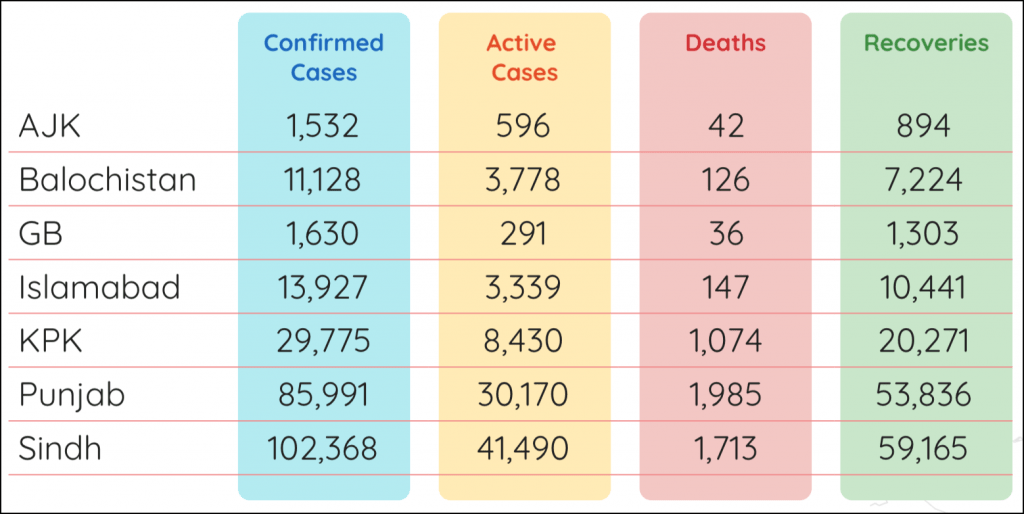 The province has imposed a 15-day “smart lockdown” in seven cities, including capital Lahore, with officials saying it would span July 10-24. Under the “smart lockdown,” all markets, shopping malls, restaurants, public and private offices and main arteries would remain closed during this time to curb the spread of COVID-19 in viral hotspots.

On Saturday, authorities reported 13 new deaths due to COVID-19, raising total fatalities to 1,985. The province also reported 730 new infections, raising confirmed cases to 85,991, against 53,836 recoveries. There are now 30,170 active cases of the virus in Punjab province.

In his daily briefing on the coronavirus pandemic, Chief Minister Murad Ali Shah on Friday urged residents to stay safe by adopting social distancing measures, wearing a face mask in public places, and washing hands with soap and water several times a day.

According to data provided by the provincial health department, the fatality rate due to COVID-19 has dropped from 6 percent two weeks ago to 3.6 percent now. Senior officials have said that they are now preparing for Eidul Azha and hoping to prevent a reoccurrence of Eidul Fitr, which had resulted in a dramatic surge in new infections of the disease.

The provincial government on Saturday reported 11 new deaths, raising its death toll to 1,074. In the past 24 hours, its recoveries rose to 20,271, while its confirmed cases have increased by 369 to 29,775. There are currently 8,430 active cases of coronavirus in the province. 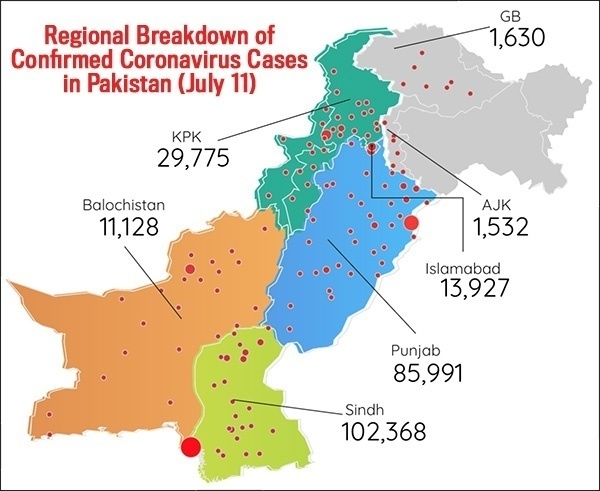 Spokesman Liaquat Shahwani on Friday said that 829,000 households of the province lived in extreme poverty prior to the COVID-19 pandemic, adding that this number had increased by 520,000 during the lockdown. “If lockdown had continued for another 4-6 months, 1,771,000 households would have been extremely poverty-hit,” he added, or 93.3 percent of the province’s population.

Confirmed cases of the novel coronavirus in the province on Saturday rose by 29 to 11,128. Overall, 126 people have died and 7,224 patients have fully recovered from the virus, leaving 3,778 active cases of COVID-19.

Islamabad on Saturday raised its confirmed coronavirus cases by 98 to 13,927. There was 1 death in the past 24 hours, while 201 more people have fully recovered. Overall, 147 people have died due to COVID-19 in the federal capital against 10,441 recoveries, leaving 3,339 active cases of COVID-19.

Confirmed cases of the novel coronavirus in Gilgit-Baltistan rose by 11 on Saturday to 1,630. The region reported 2 new deaths, raising toll to 36, while its recoveries have increased by 13 to 1,303, leaving 291 active cases.

In Pakistan-administered Kashmir, confirmed cases have increased by 47 to 1,532. There was 1 new death and 34 recoveries in the past 24 hours, leaving 42 fatalities and 894 fully recovered. It has 596 active cases of COVID-19.

Globally, the virus has now infected more than 12,625,860 people, with over 562,820 reported deaths. Governments across the word halted flights, locked down towns and cities and urged people to stay at home at the peak of the virus’s spread, but there are now signs of easements in nations that have reined it in to help shuttered economies recover. Overall, around 7,361,659 patients of the 12.6 million+ infected have recovered thus far.