The National Command and Operation Center (NCOC) on Sunday claimed that the country had witnessed a 28 percent reduction in critical coronavirus cases, crediting the decline to the government’s “smart lockdown.” In a statement, it added: “Smart lockdowns, a stronger enforcement effort, compliance of SOPs and the nationwide change in the behavior can be credited for the current gains in the fight against COVID-19.”

The provincial government has announced that it would keep all parks and recreational areas closed for Eidul Azha to prevent people from gathering and potentially spreading the virus. It also said that under the guidelines issued by the federal education ministry, schools could reopen their administration offices but no students were permitted to attend at this stage.

On Monday, authorities reported 7 new deaths due to COVID-19, raising total fatalities to 2,013. The province also reported 487 new infections, raising confirmed cases to 87,043, against 58,023 recoveries. There are now 27,007 active cases of the virus in Punjab province.

Chief Minister Murad Ali Shah on Sunday said it was “too soon” for Pakistan to declare victory over the coronavirus pandemic, saying that while the outbreak had been “contained,” there were still many challenges remaining. “It is difficult to control coronavirus until a vaccine is developed,” he said, and—in contrast to the federal government—urged people to get themselves tested even if they were asymptomatic to ensure they would not spread the virus.

Special Assistant to C.M. on Information Kamran Bangash told media on Sunday that the provincial government had issued Standard Operating Procedures (SOPs) for cattle markets ahead of Eidul Azha to protect people from coronavirus. He said the temporary markets would be set up outside cities, and would be spaced out with smaller setups to prevent large crowds from gathering in one place.

The provincial government on Monday reported 12 new deaths, raising its death toll to 1,099. In the past 24 hours, its recoveries rose to 21,158, while its confirmed cases have increased by 408 to 30,486. There are currently 8,229 active cases of coronavirus in the province. 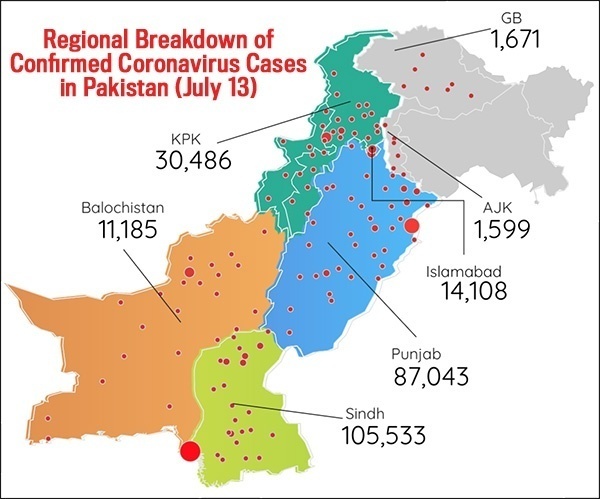 Spokesman Liaquat Shahwani on Sunday claimed daily new infections of COVID-19 in the province had dropped by 50 percent, adding that 64 percent of all patients had also recovered. In a statement, he credited the provincial government’s preventative measures to curb the spread of the virus for this reduction.

Confirmed cases of the novel coronavirus in the province on Monday rose by 28 to 11,185. Overall, 126 people have died and 7,598 patients have fully recovered from the virus, leaving 3,461 active cases of COVID-19.

Islamabad on Monday raised its confirmed coronavirus cases by 85 to 14,108. There was 1 death in the past 24 hours, while 238 more people have fully recovered. Overall, 153 people have died due to COVID-19 in the federal capital against 10,883 recoveries, leaving 3,072 active cases of COVID-19.

Confirmed cases of the novel coronavirus in Gilgit-Baltistan rose by 13 on Monday to 1,671. The region reported no new deaths, sustaining toll at 36, while its recoveries have increased by 3 to 1,319, leaving 316 active cases.

In Pakistan-administered Kashmir, confirmed cases have increased by 35 to 1,599. There was 1 new death and 36 recoveries in the past 24 hours, leaving 44 fatalities and 978 fully recovered. It has 577 active cases of COVID-19.

Globally, the virus has now infected more than 13,036,612 people, with over 571,575 reported deaths. Governments across the word halted flights, locked down towns and cities and urged people to stay at home at the peak of the virus’s spread, but there are now signs of easements in nations that have reined it in to help shuttered economies recover. Overall, around 7,582,426 patients of the 13 million+ infected have recovered thus far.