Nationwide, this is the first time single-day cases have jumped by less than 3,000 since May 31

Pakistan conducted just 21,041 tests for the novel coronavirus in the 24 hours preceding Friday morning—it’s lowest testing since June 3 for the second consecutive day—against 2,775 new infections, a positivity ratio of 13.2 percent.

Nationwide, daily spikes in confirmed cases of COVID-19 have not dropped below 3,000 since May 31. However, medical experts warn that the country’s positivity ratio still remains too high According to the World Health Organization, any country with a positivity ratio over 5 percent is likely only testing the most symptomatic patients and ignoring asymptomatic infections, which can significantly boost the spread of the virus.

The provincial government on Thursday announced it was abolishing the condition of “two mandatory, consecutive negative tests” for symptomatic COVID-19 patients to discharge them from hospitals. Under the new guidelines, any confirmed patients who do not show symptoms for three consecutive days after the 10th day of admission to hospitals would be considered free of the disease and allowed discharge.

On Friday, authorities reported 27 new deaths due to COVID-19, raising total fatalities to 1,629. The province also reported 796 new infections, raising confirmed cases to 71,987, against 21,009 recoveries. There are now 49,349 active cases of the virus in Punjab province, 22 more than a day earlier.

The provincial police department announced on Thursday that 85 more policemen had tested positive for COVID-19 this week, raising to 1,145 the number of police personnel who have thus far been infected. According to a spokesperson with the police, 13 policemen have died due to coronavirus in Sindh thus far, while 803 members of the force are still under treatment.

The provincial government has credited the “smart lockdown” for a drop in confirmed cases this week as compared to last week. It reported 10 new deaths on Friday morning, raising its death toll to 879. In the past 24 hours, its recoveries rose by 352 to 11,449, while its confirmed cases have increased by 416 to 24,303. There are currently 11,975 active cases of coronavirus in the province, 54 more than a day earlier. 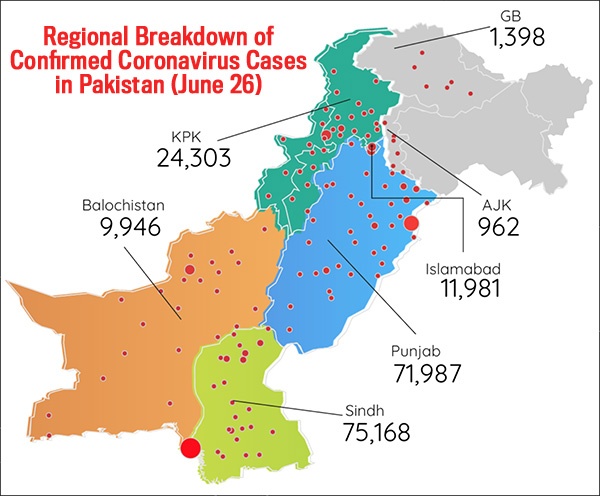 The provincial government has commenced direct international flights to Quetta to allow Pakistanis stranded overseas easier options for their return. According to provincial spokesman Liaquat Shahwani, quarantine and testing facilities have been established at the Quetta International Airport to identify and isolate any potential COVID-19 infections before they are exposed to the general public.

Confirmed cases of the novel coronavirus in the province on Friday rose by 129 to 9,946, with 1 new death raising total fatalities to 109. Overall, 3,737 patients have recovered from the virus, leaving 6,100 active cases of COVID-19.

Confirmed cases of the novel coronavirus in Gilgit-Baltistan rose by 33 on Friday to 1,398. Overall, the region has thus far reported 23 deaths and 999 recoveries, leaving 376 active cases.

In Pakistan-administered Kashmir, confirmed cases have increased by 32 to 962. The region has thus far reported 25 deaths and 395 recoveries, leaving 542 active cases of the coronavirus.

Globally, the virus has now infected more than 9,714,805 people, with over 491,855 reported deaths. Governments across the world halted flights, locked down towns and cities and urged people to stay at home at the peak of the virus’s spread, but there are now signs of easements in nations that have reined it in to help shuttered economies recover. Overall, around 5,250,085 patients of the 9.7 million+ infected have recovered thus far.