In a joint press conference on Tuesday evening, Planning Minister Asad Umar and Special Assistant to the P.M. on Health Dr. Faisal Sultan warned that the next two weeks were critical, adding that if the public did not adopt preventative measures, the country could see a peak worse than that of summer. The National Command and Operation Center (NCOC) banned indoor dining in restaurants and at public gatherings, and advised engaging ulema to observe SOPs in mosques. Umar also urged the opposition to avoid holding rallies to curb the spread of the deadly virus.

Despite being in the midst of a second wave of the coronavirus, the country has yet to fully utilize its claimed testing capacity of 74,407, and currently tests significantly below numbers proposed by global health experts. According to the World Health Organization (WHO), Pakistan’s testing policies likely only record the most symptomatic patients while ignoring the spread among asymptomatic carriers, which studies suggest comprise the majority of infections nationwide. 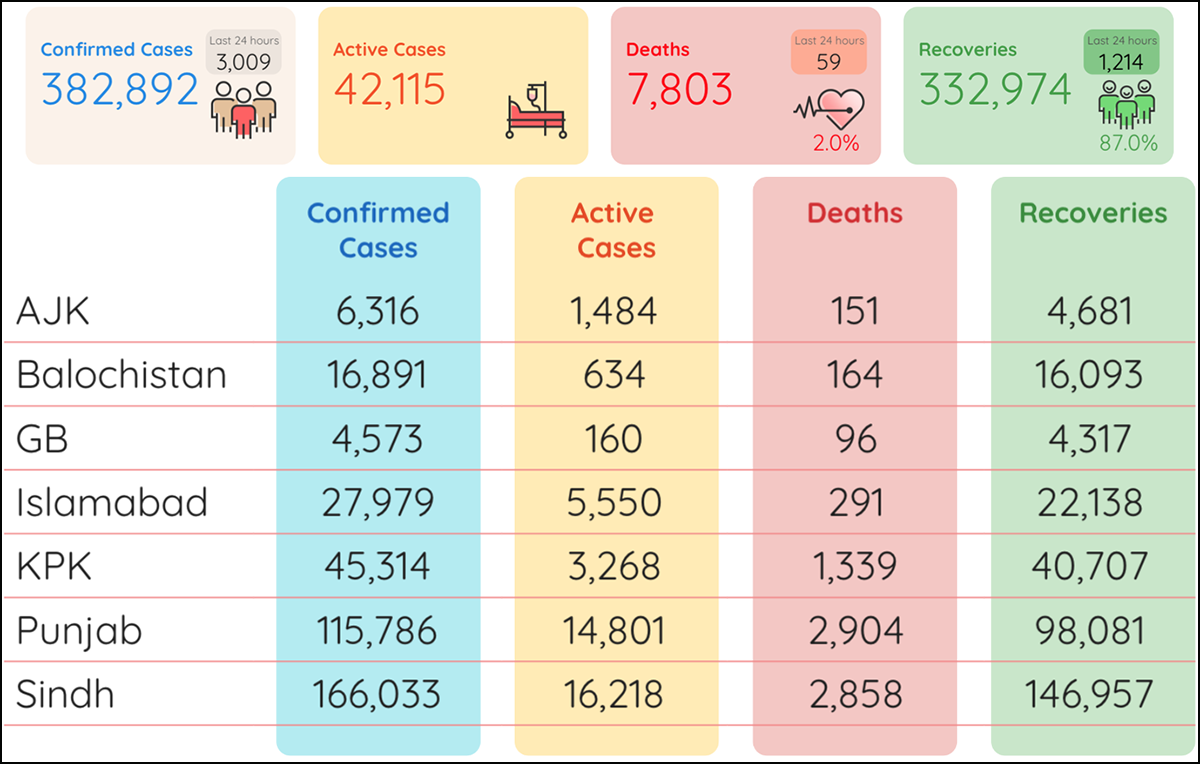 On Wednesday, authorities reported 25 new deaths due to the coronavirus, raising total casualties to 2,904. The province now has 115,786 confirmed cases; it reported 648 new infections after conducting 15,298 tests, a positivity ratio of 4.23 percent. There were 47 new recoveries recorded, leaving 98,081 fully recovered, and 14,801 active cases of the virus.

The provincial government has now imposed limits on the number of hours markets can operate in a bid to curb the spread of COVID-19. According to a notification, all markets and bazaars will be allowed to be open from 6 a.m. to 6 p.m., and violators will be fined or have their establishments sealed.

Various parts of provincial capital Peshawar have been placed under “smart lockdowns” following a surge in new infections of the coronavirus, with healthcare professionals warning that hospitals and clinics are filling up fast.

In the past 24 hours, the provincial government has recorded 382 new infections after conducting 5,426 tests, a positivity ratio of 7.04 percent. Overall, Khyber-Pakhtunkhwa’s confirmed cases have climbed to 45,314. It recorded 9 new deaths, raising toll to 1,339, while its recoveries have risen by 285 to 40,707. There are currently 3,268 active cases of COVID-19 in the province.

The province on Wednesday raised its confirmed cases to 16,891 with 45 new infections after conducting 794 tests, a positivity ratio of 5.67 percent. There was 1 new death and 32 recoveries in the past 24 hours, leaving 164 fatalities and 16,093 fully recovered. There are now 634 active cases of COVID-19 in the province.

Confirmed cases of the novel coronavirus in Gilgit-Baltistan on Wednesday increased by 15 to 4,573 after conducting 310 tests, a positivity ratio of 4.84 percent. The region reported 1 new death and 14 recoveries, leaving 96 fatalities and 4,317 fully recovered people. There are currently 160 active cases of COVID-19 in the region.

Globally, the virus has now infected more than 60,105,740 people, with over 1,414,868 reported deaths. After a devastating first wave, the world is now reeling from a second wave of the coronavirus, with many countries imposing fresh lockdowns or targeted closures in a bid to curb the spread of the virus ahead of the upcoming winter holidays. Overall, around 41,553,773 patients of the 60.1 million+ infected have recovered thus far.