According to the Economic Affairs Division, Pakistan has thus far received $2.66 billion in financial aid from several countries and international organizations over the coronavirus pandemic out of a pledged $3.302 billion. It said the International Monetary Fund had released $1.386 billion; the Asian Development Bank had disbursed $500 million; and the Asian Infrastructure Investment Bank had sent $500 million.

The inspector general of police in Punjab on Wednesday issued a notification saying the protection of officers and senior officials from the coronavirus pandemic was a top priority, stressing that extra care should be taken by anyone deputed for security during Muharram. It said that the authorities had provided washable masks to the deployed officers to ensure compliance with standard operating procedures (SOPs).

On Thursday, authorities reported no new deaths due to COVID-19, sustaining fatalities at 2,186. The province also reported 58 new infections, raising confirmed cases to 95,800, while its recoveries have increased by 60 to 90,210. There are now 3,404 active cases of the virus in the province.

Chief Minister Murad Ali Shah announced in his daily briefing on Wednesday that Sindh’s recovery rate had climbed to 95 percent, while the overall detection rate in the province throughout the pandemic now stood at 14 percent.

The provincial education department on Wednesday issued SOPs for the reopening of private educational institutions from Sept. 15, requiring all schools to have temperature checks upon entry. Anyone with a high fever would be sent back home, and in case any student tests positive for COVID-19, the entire class will be placed on 14-day leave. In addition, all staff and students are required to wear face masks and schools are required to be disinfected every weekend.

The provincial government on Thursday reported no new deaths, sustaining death toll at 1,242. In the past 24 hours, its recoveries rose by 64 to 32,711, while its confirmed cases have increased by 67 to 35,468. There are currently 1,515 active cases of coronavirus in the province.

Balochistan National Party President Sardar Akhtar Mengal on Wednesday confirmed that he had tested positive for the novel coronavirus. The member of the National Assembly confirmed the development, and urged anyone who had come into contact with him in recent days to immediately get tested for the virus.

Confirmed cases of the novel coronavirus in the province on Thursday rose by 33 to 12,403. Overall, 139 people have died and 11,273 patients have fully recovered from the virus, leaving 991 active cases of COVID-19. 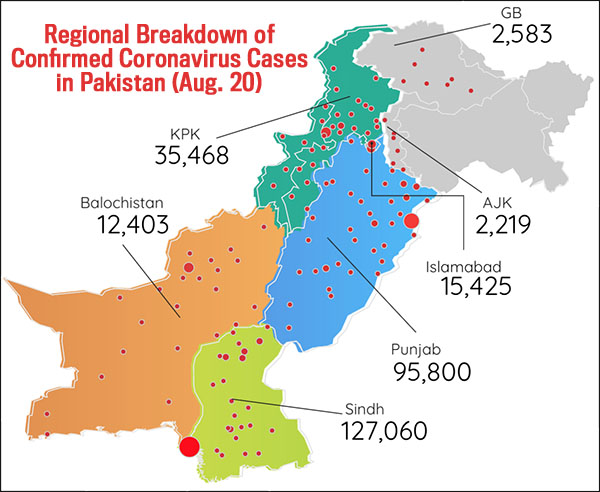 Islamabad on Thursday raised its confirmed coronavirus cases by 13 to 15,425. There were no new deaths and 224 recoveries in the past 24 hours, sustaining death toll at 175 and raising recoveries to 13,836, leaving 1,414 active cases.

Confirmed cases of the novel coronavirus in Gilgit-Baltistan rose by 18 on Thursday to 2,583. The region reported 1 new death, raising toll to 63, while its recoveries have increased by 30 to 2,224, leaving 296 active cases.

In Pakistan-administered Kashmir, confirmed cases have increased by 7 to 2,219. There was no new death and 14 recoveries in the past 24 hours, leaving 61 fatalities and 2,057 fully recovered. It now has 101 active cases of COVID-19.

Globally, the virus has now infected more than 22,579,141 people, with over 791,002 reported deaths. Governments across the word halted flights, locked down towns and cities and urged people to stay at home at the peak of the virus’s spread, but there are now signs of easements in nations that have reined it in to help shuttered economies recover. Overall, around 15,301,257 patients of the 22.5 million+ infected have recovered thus far.