The National Command and Control Center (NCOC) on Monday warned that the country could witness another spike in COVID-19 infections if the public did not practice the standard operating procedures (SOPs) laid out for Muharram and Independence Day celebrations. Planning Minister Asad Umar also stressed a robust track, trace and test protocol for tourists entering the country’s northern areas now that restrictions on movement had ended.

Chief Minister Usman Buzdar on Monday claimed the province was now back to its pre-coronavirus position, crediting the administration’s “timely” steps to curb the virus’ spread. “We have remained safe from the expected coronavirus-related losses and all activities have been restored today except educational institutions and big congregations. The routine life has been restored to normal and I pay tribute to those who played their role in overcoming this virus,” he said.

On Tuesday, authorities reported 4 new deaths due to COVID-19, raising total fatalities to 2,174. The province also reported 109 new infections, raising confirmed cases to 94,586, against 86,289 recoveries. There are now 6,123 active cases of the virus in the province.

The provincial home department on Monday said it was allowing all businesses to reopen with SOPs due to a decline in COVID-19 cases, but warned that “the disease is still prevalent and likely to increase if no adequate precautions are taken.” In the notification, the government said all businesses would now be allowed to operate six days a week, with an off either Friday or Sunday.

The provincial home and tribal affairs department on Monday announced all sectors would be allowed to resume normal operations—subject to observance of SOPs—except marriage halls and educational institutions. It also announced that all religious congregations would be allowed after approval of the district administration.

The provincial government on Tuesday reported no new deaths, sustaining its death toll at 1,231. In the past 24 hours, its recoveries rose by 79 to 31,691, while its confirmed cases have increased by 63 to 34,755. There are currently 1,833 active cases of coronavirus in the province.

The provincial government on Monday said it would review its remaining movement restrictions due to COVID-19 on Aug. 17, when its previous notification is set to expire.

Confirmed cases of the novel coronavirus in the province on Tuesday rose by 15 to 11,921. Overall, 138 people have died and 10,417 patients have fully recovered from the virus, leaving 1,366 active cases of COVID-19. 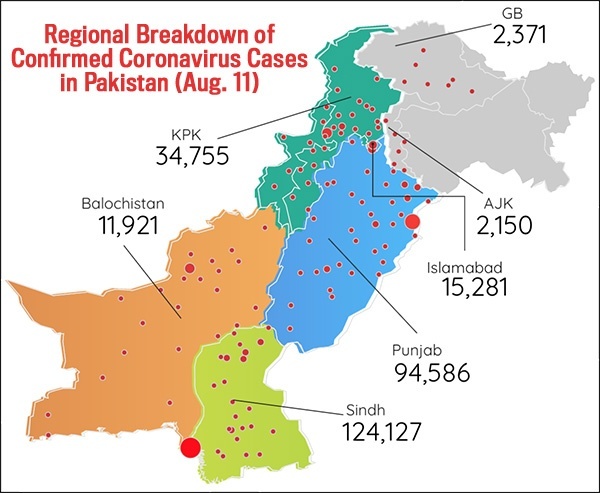 Islamabad on Tuesday raised its confirmed coronavirus cases by 20 to 15,281. There were no new deaths and 26 recoveries in the past 24 hours, sustaining death toll at 171 and raising recoveries to 12,995, leaving 2,115 active cases.

Confirmed cases of the novel coronavirus in Gilgit-Baltistan rose by 37 on Tuesday to 2,371. The region reported no new deaths, sustaining toll at 57, while its recoveries have increased by 41 to 1,955, leaving 359 active cases.

In Pakistan-administered Kashmir, confirmed cases have increased by 9 to 2,150. There was 1 new death and 32 recoveries reported in the past 24 hours, leaving 59 fatalities and 1,915 fully recovered. It now has 176 active cases of COVID-19.

Globally, the virus has now infected more than 20,254,685 people, with over 738,930 reported deaths. Governments across the word halted flights, locked down towns and cities and urged people to stay at home at the peak of the virus’s spread, but there are now signs of easements in nations that have reined it in to help shuttered economies recover. Overall, around 13,118,618 patients of the 20.2 million+ infected have recovered thus far.