The Drug Regulatory Authority of Pakistan on Monday granted approval to the National Institute of Health to conduct the Phase III clinical trial of a coronavirus vaccine developed by CanSinoBio and Beijing Institute of Biotechnology China. The trial is already underway in various countries, including China, Russia, Chile, and Argentina.

The provincial sports minister on Monday announced the standard operating procedures (SOPs) for athletic activities across the province to prevent the novel coronavirus from spreading. In a statement, Rai Taimoor Khan Bhatti said all open tournaments, matches and other sports competitions would remain suspended until the complete eradication of COVID-19.

On Tuesday, authorities reported 3 new deaths due to COVID-19, raising fatalities to 2,185. The province also reported 164 new infections, raising confirmed cases to 95,611, while its recoveries have increased by 163 to 88,861. There are now 4,565 active cases of the virus in the province.

Provincial education minister Saeed Ghani on Monday directed officials concerned to rescind the registration of private schools that had reopened this week in violation of government orders that no educational institutions would be allowed to resume operations before Sept. 15. Saying that no one would be allowed to endanger the lives and health of children, he said the early reopening of private schools was tantamount to challenging the writ of the government.

The district administration of Peshawar on Monday imposed “micro smart lockdown” in six localities of the provincial capital, with a notification saying the restrictions would remain in place until further orders. According to the office of the deputy commissioner, the decision of implementing the lockdowns was taken after emergence of coronavirus cases from these residential areas.

The provincial government on Tuesday reported no new deaths, sustaining death toll at 1,239. In the past 24 hours, its recoveries rose by 72 to 32,522, while its confirmed cases have increased by 104 to 35,337. There are currently 1,576 active cases of coronavirus in the province.

A survey conducted by the Institute for Public Opinion Research and Plus Consultant has found that residents of Balochistan had the least favorable views about the provincial government’s handling of the pandemic, with 45 percent finding it unsatisfactory. By comparison, 31 percent of Khyber-Pakhtunkhwa residents were dissatisfied; 39 percent of Punjab; and 41 percent of Sindh.

Confirmed cases of the novel coronavirus in the province on Tuesday rose by 26 to 12,321. Overall, 138 people have died and 11,153 patients have fully recovered from the virus, leaving 1,030 active cases of COVID-19. 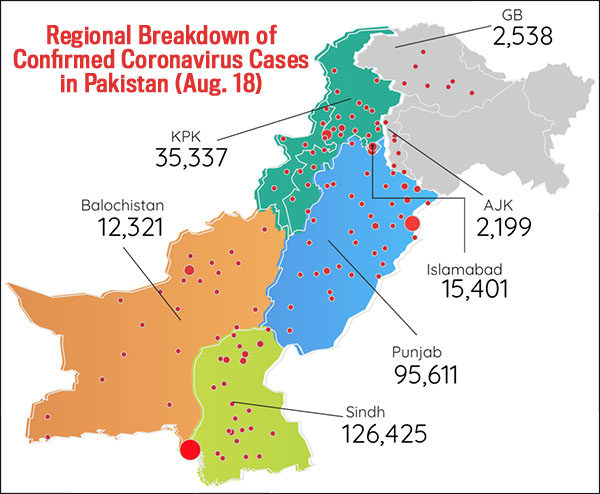 Confirmed cases of the novel coronavirus in Gilgit-Baltistan rose by 36 on Tuesday to 2,538. The region reported no new deaths, sustaining toll at 61, while its recoveries have increased by 39 to 2,172, leaving 305 active cases.

In Pakistan-administered Kashmir, confirmed cases have increased by 15 to 2,199. There was 1 new death and no new recoveries in the past 24 hours, leaving 61 fatalities and 2,002 fully recovered. It now has 136 active cases of COVID-19.

Globally, the virus has now infected more than 22,049,449 people, with over 777,440 reported deaths. Governments across the word halted flights, locked down towns and cities and urged people to stay at home at the peak of the virus’s spread, but there are now signs of easements in nations that have reined it in to help shuttered economies recover. Overall, around 14,791,865 patients of the 22 million+ infected have recovered thus far.