According to a Wall Street Journal report, China has agreed to supply Pakistan with a coronavirus vaccine as part of a trial agreement. Developed by the China National Pharmaceutical Group, Pakistan would be provided with enough doses to vaccinate about a fifth of its population, said the report, adding that vaccine trials would be conducted in collaboration with the University of Karachi.

Pakistan’s welcome decline in daily infections and overall cases, meanwhile, has encountered some trepidation from observers who warn that the country has yet to fully utilize its claimed testing capacity of 67,290—which has been reduced from 68,470, which itself had been reduced from 71,780—and is currently testing significantly below numbers proposed by global health experts. According to the World Health Organization, Pakistan’s testing policies likely only record the most symptomatic patients while ignoring the spread among asymptomatic carriers. Medical experts have also warned that the government’s decision to end nearly all movement restrictions at once risks a second wave of the virus.

The provincial government this week cautioned divisional commissioners and regional police officers about the possibility of a “resurgence” in COVID-19 infections following a visible rise in rampant violations of standard operating procedures (SOPs) in markets and business centers after it lifted a majority of lockdown restrictions.

On Saturday, authorities reported no new deaths due to COVID-19, sustaining fatalities at 2,180. The province also reported 210 new infections, raising confirmed cases to 95,203, against 86,424 recoveries. There are now 6,599 active cases of the virus in the province.

In a statement, Chief Minister Murad Ali Shah said that of the 4,294 active cases of COVID-19 currently in Sindh, around 3,896 patients were in self-isolation; eight were under treatment at various isolation centers; and 390 were being treated at various health facilities.

Authorities in the province have announced they are ready to implement “micro smart lockdowns” to curb the spread of COVID-19 by imposing movement restrictions on specific neighborhoods and streets. Health officials have said that the NCOC has recommended enforcement of micro smart lockdowns in any areas—especially houses or multi-storey buildings—where there are multiple clusters of the virus.

The provincial government on Saturday reported 2 new deaths, raising its death toll to 1,238. In the past 24 hours, its recoveries rose by 56 to 32,373, while its confirmed cases have increased by 70 to 35,091. There are currently 1,480 active cases of coronavirus in the province.

The province’s “smart lockdown” is set to expire on Aug. 17, with authorities saying that it is unlikely to see an extension in the wake of declining cases of COVID-19.

Confirmed cases of the novel coronavirus in the province on Saturday rose by 82 to 12,144. Overall, 138 people have died and 10,610 patients have fully recovered from the virus, leaving 1,396 active cases of COVID-19. 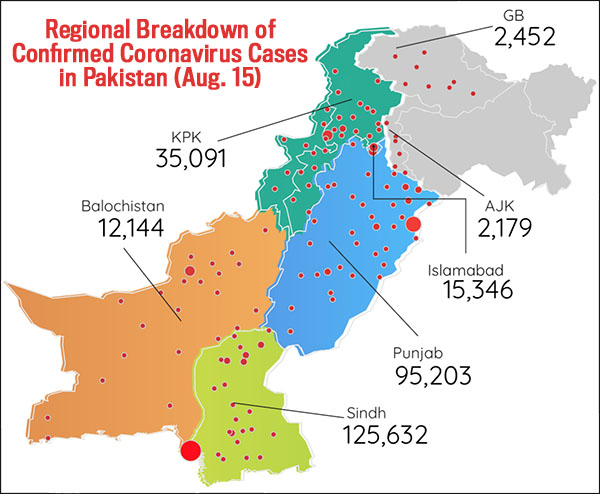 Islamabad on Saturday raised its confirmed coronavirus cases by 4 to 15,346. There were no new deaths and 22 recoveries in the past 24 hours, sustaining death toll at 173 and increasing recoveries to 13,100, leaving 2,073 active cases.

Confirmed cases of the novel coronavirus in Gilgit-Baltistan rose by 26 on Saturday to 2,452. The region reported no new deaths, sustaining toll at 60, while its recoveries have increased by 53 to 2,103, leaving 289 active cases.

In Pakistan-administered Kashmir, confirmed cases have increased by 12 to 2,179. There was 1 new death and 8 recoveries reported in the past 24 hours, leaving 60 fatalities and 1,989 fully recovered. It now has 130 active cases of COVID-19.

Globally, the virus has now infected more than 21,354,689 people, with over 763,353 reported deaths. Governments across the word halted flights, locked down towns and cities and urged people to stay at home at the peak of the virus’s spread, but there are now signs of easements in nations that have reined it in to help shuttered economies recover. Overall, around 14,147,925 patients of the 21.3 million+ infected have recovered thus far.