A spokesman for Pakistan International Airlines on Wednesday announced that no coronavirus testing was required to travel domestically, adding that the state flag carrier has also not yet made negative test results mandatory for all international travelers. He said that all travelers should be aware if such test results are required in their destination countries, but stressed that it is not essential for boarding.

The provincial government this week shuttered the coronavirus wards in three government-run hospitals of Rawalpindi due to the past month’s decline in new confirmed infections. There is now only one dedicated ward for COVID in the garrison city—at the Rawalpindi Institute of Urology.

On Thursday, authorities reported 2 new deaths due to COVID-19, raising total fatalities to 2,179. The province also reported 150 new infections, raising confirmed cases to 94,865, against 86,389 recoveries. There are now 6,297 active cases of the virus in the province.

The shrine of Lal Shahbaz Qalandar will reopen from Aug. 17 under government-issued Standard Operating Procedures (SOPs) to curb the spread of COVID-19. Closed on March 14, 2020, the shrine’s reopening has been approved by requiring face masks for all devotees; allowing only 50 people to enter the main hall at one time; and daily disinfection of the premises.

The Galiyat Development Authority has told local media that over 50,000 vehicles carrying an estimated 200,000 tourists arrived in the region in a single day after the government allowed the resumption of tourism. The provincial government has warned that strict action would be taken against anyone violating SOPs, and has stressed that face masks and frequent use of sanitizers is mandatory.

The provincial government on Thursday reported no new deaths, sustaining its death toll at 1,235. In the past 24 hours, its recoveries rose by 409 to 32,248, while its confirmed cases have increased by 88 to 34,947. There are currently 1,464 active cases of coronavirus in the province.

The province, already reeling from COVID-19, is currently suffering from flooding that has left over 10 people dead and several more injured. Authorities have vowed that rescue and relief efforts will continue alongside efforts to curb the spread of coronavirus.

Confirmed cases of the novel coronavirus in the province on Thursday rose by 88 to 12,044. Overall, 138 people have died and 10,458 patients have fully recovered from the virus, leaving 1,448 active cases of COVID-19. 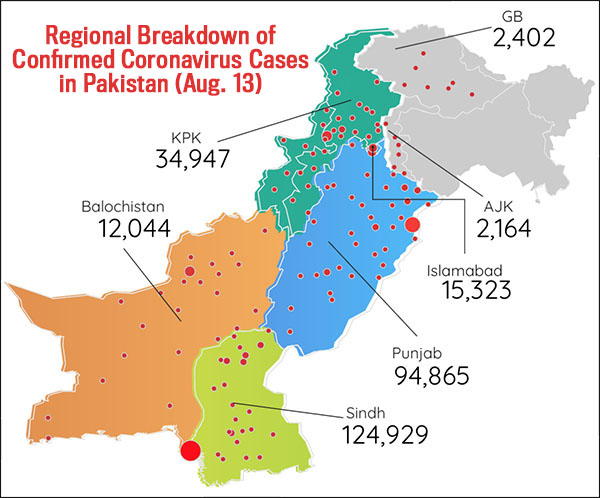 Islamabad on Thursday raised its confirmed coronavirus cases by 27 to 15,323. There was 1 death and no new recoveries in the past 24 hours, raising death toll to 173 and sustaining recoveries at 13,020, leaving 2,130 active cases.

Confirmed cases of the novel coronavirus in Gilgit-Baltistan rose by 20 on Thursday to 2,402. The region reported no deaths, sustaining toll at 58, while its recoveries have increased by 21 to 2,002, leaving 342 active cases.

In Pakistan-administered Kashmir, confirmed cases have increased by 7 to 2,164. There were no new deaths and 35 recoveries reported in the past 24 hours, leaving 59 fatalities and 1,971 fully recovered. It now has 134 active cases of COVID-19.

Globally, the virus has now infected more than 20,807,725 people, with over 747,268 reported deaths. Governments across the word halted flights, locked down towns and cities and urged people to stay at home at the peak of the virus’s spread, but there are now signs of easements in nations that have reined it in to help shuttered economies recover. Overall, around 13,707,555 patients of the 20.8 million+ infected have recovered thus far.