Planning Minister Asad Umar on Friday announced that the government had devised new standard operating procedures (SOPs) for Aug. 14, Pakistan’s Independence Day, and events surrounding the Islamic month of Muharram. He said that all Muharram processions would be required to register with local administrators and organizers asked to avoid narrow streets. Similarly, use of sanitizers at entry points at all Independence Day events has been made mandatory, and face masks are required of all participants.

Pakistan’s welcome decline in daily infections and overall cases, meanwhile, has encountered some trepidation from observers who warn that the country has yet to fully utilize its claimed testing capacity of 68,470—which has actually been reduced from an earlier 71,780—and is currently testing significantly below numbers proposed by global health experts. According to the World Health Organization, Pakistan’s testing policies likely only record the most symptomatic patients while ignoring the spread among asymptomatic carriers. Medical experts have also warned that the government’s decision to end nearly all movement restrictions risks a second wave of the virus.

The provincial Health Department will conduct sampling for coronavirus from drains of the Water and Sanitation Agency, Health Minister Dr. Yasmin Rashid announced on Friday, as part of measures to ascertain the spread of the virus in the province.

On Saturday, authorities reported 2 new deaths due to COVID-19, raising total fatalities to 2,166. The province also reported 183 new infections, raising confirmed cases to 94,223, against 86,240 recoveries. There are now 5,817 active cases of the virus in the province.

Karachi Commissioner Iftikhar Shallwani on Friday said that the provincial government had not yet decided to reopen gyms, restaurants, wedding halls and public parks in the city—despite Planning Minister Asad Umar announcing this week that restaurants, gyms and parks would be allowed to resume normal operations from Aug. 10. Shallwani clarified that this decision would only be taken after approval by the provincial task forces on COVID-19.

The provincial health department on Friday announced that the overall recovery rate in the province was now 82 percent. It said that approximately 75 percent of novel coronavirus patients were male, while 25 percent were female.

The provincial government on Saturday reported 3 new deaths, raising its death toll to 1,222. In the past 24 hours, its recoveries rose by 766 to 31,447, while its confirmed cases have increased by 107 to 34,539. There are currently 1,870 active cases of coronavirus in the province.

The provincial education department on Friday said that it would raise awareness about COVID-19 SOPs among around 60,000 teachers and 1 million students to prevent a resurgence of the disease after educational institutions reopen from next month.

Confirmed cases of the novel coronavirus in the province on Saturday rose by 14 to 11,835. Overall, 137 people have died and 10,304 patients have fully recovered from the virus, leaving 1,394 active cases of COVID-19. 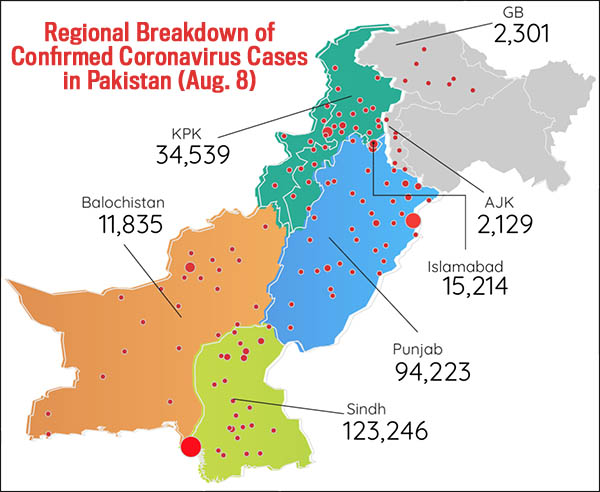 Confirmed cases of the novel coronavirus in Gilgit-Baltistan rose by 14 on Saturday to 2,301. The region reported no new deaths, sustaining toll at 55, while its recoveries have increased by 26 to 1,887, leaving 359 active cases.

In Pakistan-administered Kashmir, confirmed cases have increased by 5 to 2,129. There was 1 new death and 29 recoveries in the past 24 hours, leaving 58 fatalities and 1,883 fully recovered. It now has 188 active cases of COVID-19.

Globally, the virus has now infected more than 19,545,325 people, with over 724,080 reported deaths. Governments across the word halted flights, locked down towns and cities and urged people to stay at home at the peak of the virus’s spread, but there are now signs of easements in nations that have reined it in to help shuttered economies recover. Overall, around 12,545,630 patients of the 19.5 million+ infected have recovered thus far.