Pakistan recorded its highest number of coronavirus infections in a single 24-hour period on Tuesday morning, after Prime Minister Imran Khan announced the previous evening that the country would now have to “learn to live with the coronavirus, as businesses cannot be shut down.”

In the 24-hour period preceding 8:45 a.m. Tuesday, the country reported 3,964 new infections of COVID-19, raising total confirmed cases to 76,398. Similarly, 78 deaths were recorded, bringing to 1,621 the fatalities caused by the virus. Nationwide, 16,548 tests were administered—nowhere close to the 30,000/day Planning Minister Asad Umar has claimed the government has the capacity for—while 27,110 people have now made full recoveries.

There are currently 47,667 active cases of the coronavirus in the country.

In a televised press statement on Monday, the prime minister said he wanted the tourism sector to be reopened—against the advice of all provinces except Punjab—and bluntly stated that infections and deaths from COVID-19 would continue to soar and any responsibility to halt its spread rested solely with the public and not the government.

“We cannot keep feeding money to the impoverished [as part of relief efforts],” he said in a part of the statement directed at healthcare workers, who have repeatedly urged the government against any further easing in lockdown measures.

Pakistan’s most populous province has decided to keep all businesses open five days a week, from 9 a.m. to 7 p.m. allegedly to safeguard laborers and daily wage earners. The ease comes as a summary prepared by the province’s Health Department, submitted to the government on May 15, was leaked to the press estimating that there were more than 670,000 cases of coronavirus in provincial capital Lahore alone.

The same report rubbished the prime minister’s so-called smart lockdown, saying it was pointless when the virus had spread to every corner of the city. It had also recommended a 4-week complete lockdown to curb the spread of the virus, a guidance that was willfully ignored by the government in a bid to reopen industries.

On Tuesday, the provincial death toll due to COVID-19 increased by 43 to 540, exceeding all other provinces and federally administered areas. The province also reported 1,610 new infections, raising confirmed cases to 27,850, against 7,116 recoveries. There are now 20,194 active cases of the virus in Punjab province.

Adviser to the C.M. Murtaza Wahab on Monday stated bluntly that the federal government’s latest decision to “ease” lockdowns meant there was no longer any lockdown in the country. “The lockdown is finished. Now all we have are SOPs,” he told Geo News. Meanwhile, the province has issued its “negative list” of sectors that will remain closed, including educational institutions, marriage halls, gyms and sports centers, restaurants except for takeaway and delivery services, theme parks and beauty parlors, and cinemas and theaters. All large public gatherings and tourist hotspots also remain banned.

The total number of confirmed COVID-19 cases in the province on Tuesday morning rose to 29,647. Additionally, the province raised its casualties by 22 to 503, while its recoveries rose to 14,590. Overall, the province now has 14,554 active cases of the novel coronavirus. 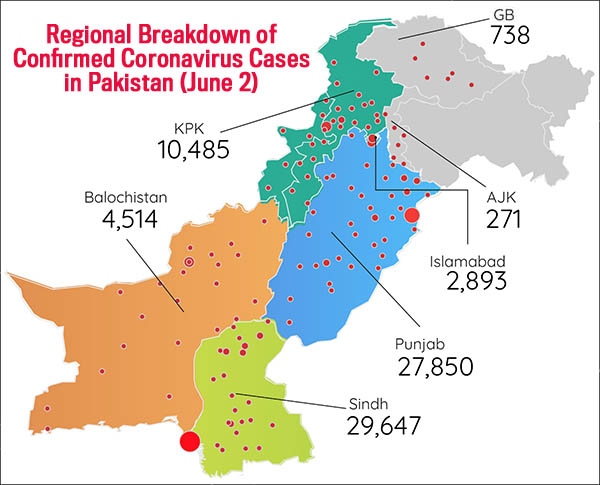 The province has instituted a two-day “lockdown”—Saturday and Sunday—while all businesses except those in the “negative list” would be permitted to function five days a week, with all sectors apart from essential items directed to cease operations at 7 p.m. daily. The sectors still banned are: all educational institutions; all marriage halls; sports facilities including gyms; athletic tournaments; restaurants and hotels; theme parks; beauty parlors; cinemas; large public gatherings; and tourism-related activities.

The province reported 9 new deaths, raising its death toll to 482. In the same time period, its recoveries rose to 2,973, while its confirmed cases have increased to 10,485.

There are currently 7,030 active cases of coronavirus in the province.

While the provincial government has yet to issue a formal notification about its ongoing measures, spokesman Liaquat Shahwani on Monday announced on Twitter that all markets and shops would be allowed to remain open six days a week from 9 a.m. to 7 p.m. “There will be a complete lockdown on Fridays,” he added.

Overall, there are currently 4,514 confirmed cases of the novel coronavirus in the province, with 49 deaths and 1,565 recoveries. It currently has 2,900 active cases of COVID-19.

Islamabad on Tuesday raised its confirmed COVID-19 infections to 2,893, with 30 deaths and 169 recoveries. Presently, the Islamabad Capital Territory has 2,694 active cases of the novel coronavirus.

In Gilgit-Baltistan, cases of the novel coronavirus rose to 738. Overall, it has thus far reported 11 deaths and 527 recoveries, leaving 200 active cases.

In Pakistan-administered Kashmir, confirmed cases have increased to 271. It has also reported 6 deaths and 170 recoveries, leaving 95 active cases of the virus.

Globally, the virus has now infected more than 6,371,661 people, with over 377,552 reported deaths. Governments across the world have halted flights, locked down towns and cities and urged people to stay at home, but there are signs of easements to help shuttered economies recover. Overall, around 2,904,925 patients of the 6.3 million+ infected have recovered thus far.