The National Command and Operation Center (NCOC) has said that the country has witnessed a 28 percent reduction in critical patients in the past week. Planning Minister Asad Umar credited this to the country’s “smart lockdown” policy, and the implementation and enforcement of standard operating procedures to curb the spread of the deadly disease. 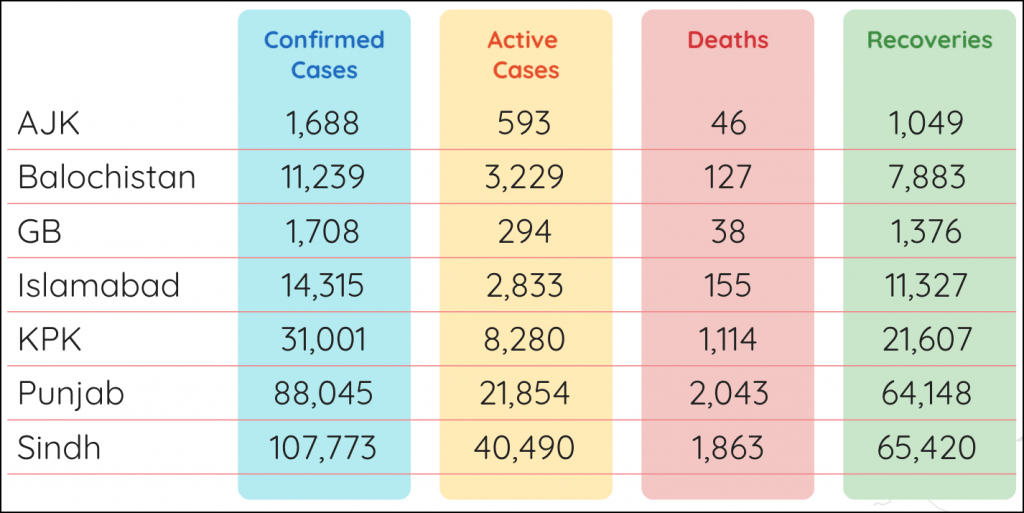 The provincial health department on Tuesday extended the ongoing lockdown restrictions till July 30, reiterating that educational institutions, wedding halls, restaurants, parks and cinema halls would remain closed. Similarly, social and religious gatherings, and all sports activities, have also been banned.

On Wednesday, authorities reported 17 new deaths due to COVID-19, raising total fatalities to 2,043. The province also reported 553 new infections, raising confirmed cases to 88,045, against 64,148 recoveries. There are now 21,854 active cases of the virus in Punjab province.

The province currently boasts the highest number of active cases of COVID-19—40,490—compared to 21,854 in Punjab and less than 10,000 in all the other regions of the country.

Special Assistant to C.M. on Information Kamran Bangash on Tuesday credited result-oriented steps for curbing the spread of the novel coronavirus, adding that the smart lockdowns had produced the “desired” results.

The provincial government on Wednesday reported 8 new deaths, raising its death toll to 1,114. In the past 24 hours, its recoveries rose to 21,607, while its confirmed cases have increased by 254 to 31,001. There are currently 8,280 active cases of coronavirus in the province. 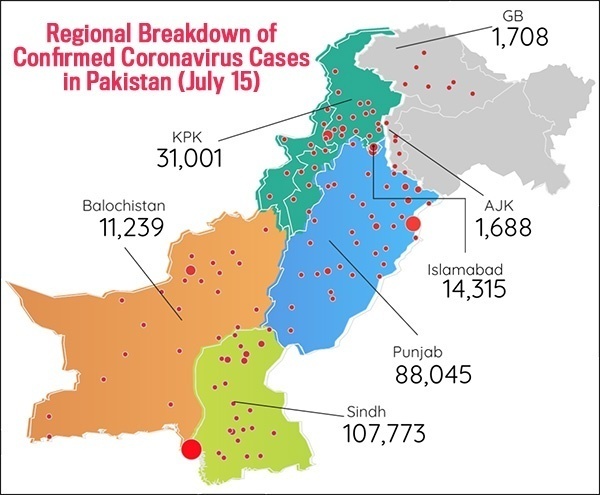 He said Pakistan could overcome the pandemic if the government-issued SOPs were strictly implemented, adding there was no other way to overcome the outbreak.

Confirmed cases of the novel coronavirus in the province on Wednesday rose by 47 to 11,239. Overall, 127 people have died and 7,883 patients have fully recovered from the virus, leaving 3,229 active cases of COVID-19.

Islamabad on Wednesday raised its confirmed coronavirus cases by 113 to 14,315. There were no deaths or recoveries in the past 24 hours, sustaining death toll at 155 and recoveries at 11,327, leaving 2,833 active cases.

Confirmed cases of the novel coronavirus in Gilgit-Baltistan rose by 14 on Wednesday to 1,708. The region reported 2 new deaths, raising toll to 38, while its recoveries have increased by 6 to 1,376, leaving 294 active cases.

In Pakistan-administered Kashmir, confirmed cases have increased by 33 to 1,688. There was 1 new death and 20 recoveries in the past 24 hours, leaving 46 fatalities and 1,049 fully recovered. It has 593 active cases of COVID-19.

Globally, the virus has now infected more than 13,461,400 people, with over 581,287 reported deaths. Governments across the word halted flights, locked down towns and cities and urged people to stay at home at the peak of the virus’s spread, but there are now signs of easements in nations that have reined it in to help shuttered economies recover. Overall, around 7,851,480 patients of the 13.4 million+ infected have recovered thus far.