For fourth consecutive day, country breaks own records for infections registered in a 24-hour period

Confirmed cases of the coronavirus in Pakistan climbed to 89,249 on Friday, as the country recorded 4,896 new infections against 22,812 tests—a ratio of 21.5 percent. The World Health Organization has said that any country with a positive ratio of cases above 10 percent is likely only testing the sickest patients and does not have an accurate picture of the true spread of the virus.

There are currently 56,213 active cases of the coronavirus in the country.

The government, in a meeting of the National Command and Operation Center with representatives from all four provinces, Gilgit-Baltistan and Pakistan-administered Kashmir, declared that its strategy was now reliant on stemming the spread of the virus by ensuring the public’s compliance with standard operating procedures (SOPs), including mandatory face masks in public places and social distancing.

Individuals found violating the SOPs, said the meeting, would be fined, while shops, businesses and markets that were discovered to be flouting regulations would be sealed and barred from continuing to do business.

According to local media, Prime Minister Imran Khan is set to deliver another nationally televised address to the nation regarding the coronavirus situation soon—though there has been no official notification of this yet.

The country’s most populous province has now relaxed restrictions on public places, allowing them to reopen from today (Friday). People who go to parks would be required to wear face masks and ensure social distancing to combat the virus. A Punjab Assembly session has also been summoned at 3 p.m. to debate the spiking COVID-19 infections in the province.

On Friday, authorities reported 22 new deaths due to COVID-19, raising total fatalities to 629. The province also reported 2,040 new infections, raising confirmed cases to 33,144, against 7,806 recoveries. There are now 24,709 active cases of the virus in Punjab province.

Chief Minister Murad Ali Shah on Thursday told the media that he did not blame the public for violating SOPs, saying mixed messaging from the government had confused the issue. “One person says it [novel coronavirus] is a dangerous disease while another says it is just flu, you will be fine after suffering cold symptoms,” he said. “There should be a unified message [from the government] that this is a life-threatening disease. This is serious,” he added.

The total number of confirmed COVID-19 cases in the province on Friday morning rose to 33,536. Additionally, the province’s death toll climbed by 20 to 575, while its recoveries rose to 16,782—nearly a full 50 percent of all registered cases in region. Overall, the province now has 16,179 active cases of the novel coronavirus.

Adviser to the C.M. on Information Ajmal Wazir on Thursday announced that the provincial government had approved SOPs to reopen tourism. “Under the SOPs, hotels [and tour operators] would be required to ensure mandatory face masks and social distancing, provide soaps and clean water, and screen tourists with thermal scans,” he said.

“We want to adopt the P.M.’s vision of living with the pandemic, but will no longer compromise on SOPs,” he said, warning the public that strict action would be taken against any citizens or businesses that continued to violate guidelines.

There are currently 8,148 active cases of coronavirus in the province. 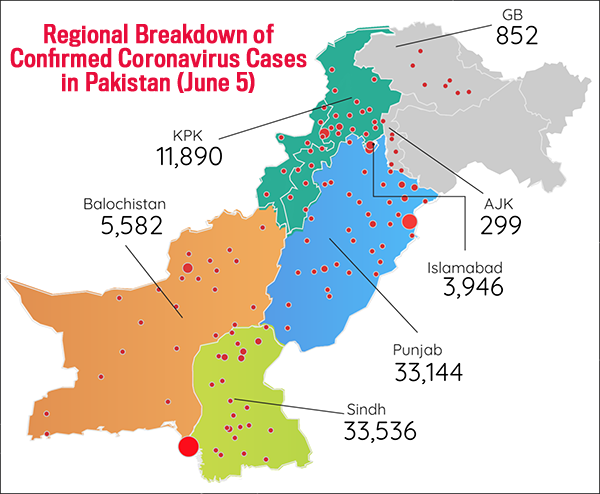 Chief Minister Jam Kamal Khan on Thursday said 520,000 households had fallen into poverty during the lockdown. “We will protest against the neglect of development projects in the province,” he said, adding that he had boycotted a meeting for the federal Public Sector Development Program over ongoing sidelining of the province.

Overall, confirmed cases of the novel coronavirus in the province rose by 358 to 5,582, with 2 new deaths raising fatalities to 53. Overall, 2,037 patients have recovered from the deadly virus, while there are currently 3,492 active cases of COVID-19.

Islamabad is now issuing Rs. 3,000 fines for citizens who do not wear face masks in public, as part of the government’s measures to ensure compliance with SOPs to curb the spread of COVID-19.

On Friday, the Islamabad Capital Territory raised its confirmed coronavirus infections by 402 to 3,946, with 3 new deaths raising the death toll to 41. Overall there have been 629 recoveries, leaving 3,276 active cases of COVID-19.

Confirmed cases of the novel coronavirus in Gilgit-Baltistan rose by 28 to 852 on Friday morning. Overall, the region has thus far reported 12 deaths and 541 recoveries, leaving 299 active cases.

In Pakistan-administered Kashmir, confirmed cases increased by 14 to 299. In the past 24 hours, the region has reported no new deaths and 9 recoveries. Overall, it has thus far reported 7 deaths and 182 recoveries, leaving 110 active cases of the coronavirus.

Globally, the virus has now infected more than 6,702,699 people, with over 393,212 reported deaths. Governments across the world have halted flights, locked down towns and cities and urged people to stay at home, but there are signs of easements in nations that have reined in the virus’ spread to help shuttered economies recover. Overall, around 3,251,590 patients of the 6.7 million+ infected have recovered thus far.