Pakistan on Thursday reported 1,523 new infections of the novel coronavirus, the highest single-day spike in confirmed cases thus far, as the federal cabinet approved easing lockdowns imposed to curb the spread of the virus.

The past 24 hours also witnessed 38 new deaths due to the outbreak, against 247 recoveries, raising the death toll and overall recoveries to 564 and 6,464, respectively.

According to the National Command and Operation Center, Pakistan has administered 12,196 tests in the past 24 hours, another first, as the country has thus far been unable to exceed 10,000 tests/day. There have been 244,778 total tests conducted since the virus first emerged in Pakistan at the end of February, though many of these are likely retests, as all positive cases require multiple negative results before they are deemed safe to leave quarantine.

Overall, Pakistan currently has 17,045 active cases of the novel coronavirus, 1,238 more than a day earlier, a worrying development for the country’s already struggling healthcare professionals, who have come out against any easing in movement restrictions at this critical stage.

The federal government, led by Prime Minister Imran Khan, however believes that more people would die of hunger than coronavirus if movement restrictions continue. The prime minister has vowed to ease the lockdowns even further from next week, with reports suggesting public transport, large industries and small shops and retailers are all set to resume operations even as the country witnesses it’s deadliest days due to the COVID-19 pandemic.

On Monday, Khan told a press conference that coronavirus “had reduced to manageable levels” in Pakistan. Doctors of the Pakistan Medical Association, meanwhile, say hospitals are filling up fast, and have warned that the government’s policies risk a disaster if the pace of infection does not slow.

The country’s most populous province reported its 175th death due to COVID-19 on Thursday morning, as its government announced that it would ease movement restrictions before Eid, a worrying prospect that could result in large numbers of people coming out on the streets in the final days of the holy month of Ramzan and boosting the spread of the disease.

Thus far, the province leads in both testing and overall infections, reporting 9,077 confirmed cases of the novel coronavirus. Provincial health authorities have said they have the capacity to administer 6,500 tests/day, though thus far it is testing around 5,000 samples/day.

Overall, the province has reported 3,184 recoveries, leaving 5,718 active cases, 527 more than a day earlier. The majority of the cases continue to be reported from Lahore, according to the Punjab Disaster Management Authority.

The provincial government maintains that it will not relax lockdown restrictions unless medical professionals affirm that it is the correct move, with Chief Minister Murad Ali Shah saying last month that the economy can recover, but the dead cannot be brought back to life.

On Thursday morning, the total number of confirmed COVID-19 cases in Sindh rose to 8,640, with 451 new infections recorded. Additionally, the province recorded 9 new deaths, raising its casualties to 157, while its recoveries rose by 60 to 1,731.

Overall, the province currently has 6,752 active cases right now, 382 more than a day ago. 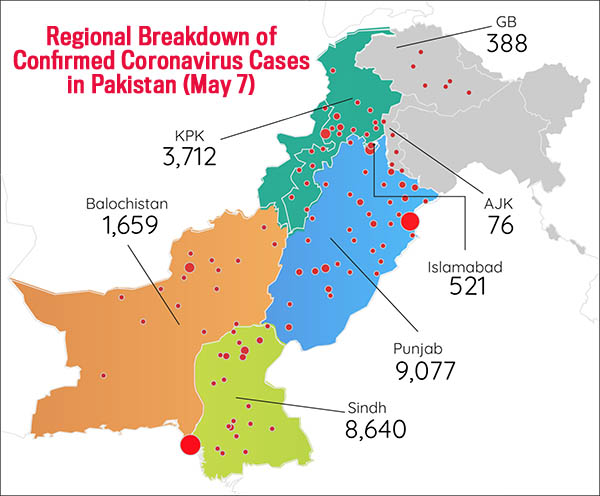 The province’s fatalities due to COVID-19 hit 203 on Thursday morning, 9 more than a day earlier. This remains the highest COVID-19-related fatality rate in the country, exceeding by nearly 30 the deaths thus far reported in Punjab, which has the second highest death toll.

Overall, the province has now recorded 3,712 confirmed cases of the novel coronavirus, with 939 recoveries. It currently has 2,570 active cases, 140 more than a day earlier.

The sole province to extend its movement restrictions—till May 19—over the rapid spread of the disease, has thus far reported 1,659 confirmed cases of the novel coronavirus, with 22 deaths and 209 recoveries. It currently has 1,428 active cases, 160 more than a day earlier. The province has reported 1 new death in the past 24 hours, and 3 new recoveries.

Provincial spokesman Liaquat Shahwani on Wednesday hit back at traders, who have been mounting pressure to resume operations. During an appearance on a private broadcaster, he said that if markets remained empty for a short while so that hospitals could be empty in future, it was a risk worth taking.

Islamabad on Thursday raised its confirmed COVID-19 infections to 521, with no new deaths or recoveries. Thus far, the Islamabad Capital Territory has reported 4 deaths and 56 recoveries, leaving 461 active cases, 36 more than a day earlier.

In Gilgit-Baltistan, cases of the novel coronavirus rose to 388, with no new deaths and 6 new recoveries. Overall, 3 deaths due to COVID-19 have been reported from the region, and 286 recoveries, leaving 97 active cases, 4 less than a day earlier.

In Pakistan-administered Kashmir, the total number of confirmed cases remains unchanged at 76, with no new deaths and 3 new recoveries. Overall, it has 19 active cases of the virus, 3 less than a day earlier.

Globally, the virus has now infected more than 3,820,500 people, with over 265,080 reported deaths. Governments across the world have halted flights, locked down towns and cities and urged people to stay at home, but there are signs of easements to help shuttered economies recover. Overall, around 1,303,025 patients of the 3.8 million+ infected have recovered thus far.