Pakistan on Monday morning recorded its lowest single-day death toll due to the novel coronavirus since May 27, with 50 new deaths from the deadly virus raising overall fatalities to 4,762.

The federal government over the weekend marked “100 days” of the National Command and Operation Center’s efforts to combat COVID-19, with Prime Minister Imran Khan urging authorities concerned to ensure the virus did not spread during the upcoming Eidul Azha. Planning Minister Asad Umar, meanwhile, told journalists that if citizens continued to practice social distancing and used preventative measures such as face masks, the country could restrict total cases of the disease to below 400,000.

While the government has hailed the reduction in new infections, claiming it proves the effectiveness of its policy, health experts have warned that the country is still testing far below its claimed capacity of 71,780—and significantly below the numbers proposed by global health experts—having only conducted 22,271 tests in the past 24 hours. 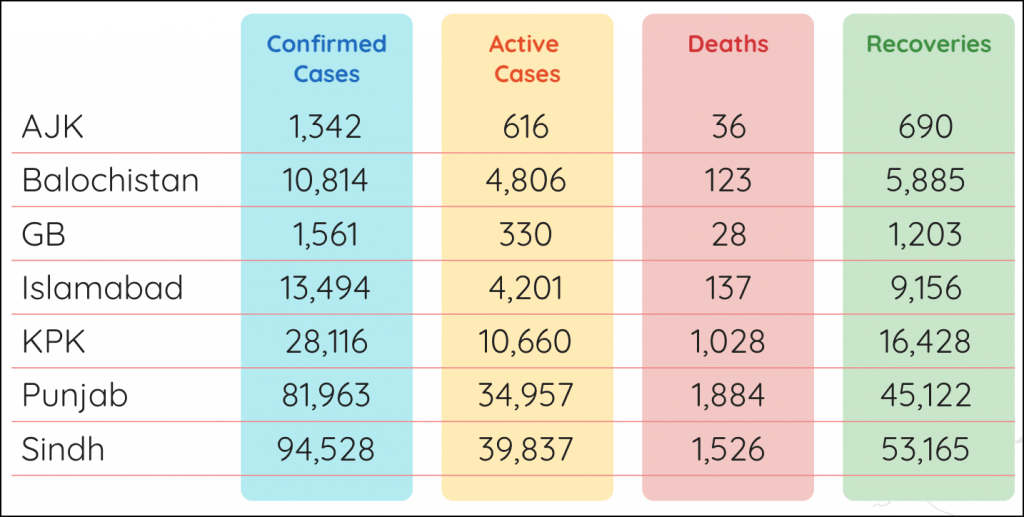 Provincial capital Lahore continues to report a large number of violations of standard operating procedures introduced to curb the spread of COVID-19, with its police chief saying 1,319 cases had been registered for such violations over the weekend.

On Monday, authorities reported 13 new deaths due to COVID-19, raising total fatalities to 1,884. The province also reported 646 new infections, raising confirmed cases to 81,963, against 45,122 recoveries. There are now 34,957 active cases of the virus in Punjab province.

Under the federal government’s “smart lockdown” strategy, the provincial government has sealed several neighborhoods of Karachi’s South District until July 16 to curb the spread of COVID-19. The government, over the weekend, also announced it was resuming intercity bus services, adding that SOPs would be strictly enforced and monitored.

Provincial health and finance minister Taimur Jhagra has said that the province is using the recent drop in COVID-19 infections to scale up preparedness for a potential second wave of the disease. He has claimed that these measures would be replicated by all other provinces and federating units.

The provincial government on Monday reported 8 new deaths, raising its death toll to 1,028. In the past 24 hours, its recoveries rose to 16,428, while its confirmed cases have increased by 273 to 28,116. There are currently 10,660 active cases of coronavirus in the province. 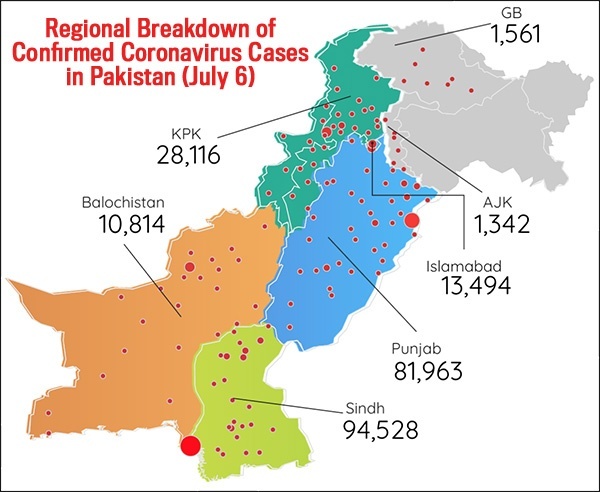 The Home and Tribal Affairs Department over the weekend issued SOPs for Eidul Azha to control the spread of COVID-19, with the NCOC announcing that all other provinces and federating units would replicate it.

Confirmed cases of the novel coronavirus in the province on Monday rose by 48 to 10,814. Overall, 123 people have died and 5,885 patients have fully recovered from the virus, leaving 4,806 active cases of COVID-19.

Islamabad on Monday raised its confirmed coronavirus cases by 85 to 13,494. There were 3 new deaths in the past 24 hours, while 201 more people have fully recovered. Overall, 137 people have died due to COVID-19 in the federal capital against 9,156 recoveries, leaving 4,201 active cases of COVID-19.

Confirmed cases of the novel coronavirus in Gilgit-Baltistan rose by 16 on Monday to 1,561. The region reported no new deaths, sustaining fatalities to 28, while its recoveries have increased by 5 to 1,203, leaving 330 active cases.

In Pakistan-administered Kashmir, confirmed cases have increased by 54 to 1,342. The region’s death toll increased by 1 to 36, while 690 people have now fully recovered. It has 616 active cases of COVID-19.

Globally, the virus has now infected more than 11,559,213 people, with over 536,787 reported deaths. Governments across the world halted flights, locked down towns and cities and urged people to stay at home at the peak of the virus’s spread, but there are now signs of easements in nations that have reined it in to help shuttered economies recover. Overall, around 6,535,900 patients of the 11.5 million+ infected have recovered thus far.