The total number of confirmed infections of the novel coronavirus in Pakistan soared to 18,114 on Saturday morning, against 4,715 recoveries and 417 deaths, leaving 12,982 active cases. The country also reported its second-highest single-day death toll yet, with 32 fatalities occurring due to COVID-19 nationwide.

According to the National Institute of Health, the government recorded 400 new recoveries and 1,297 new infections in the past 24 hours—the highest single-day jump thus far in the country. The spike comes as Punjab province resumed testing at near-capacity after a week of administering less than 2,000 tests/day, raising fears that the provincial government was not taking the spread of the deadly disease seriously.

In response, PTI ministers—including newly appointed information minister Shibli Faraz—slammed Bhutto-Zardari as an ‘elite’ who did not understand the plight of the common man. The prime minister this week accused the ‘elite’ of spearheading the nationwide lockdowns imposed to curb the spread of COVID-19—perhaps forgetting that his own federal government imposed movement restrictions in March and has now extended them twice already.

The government continues to claim the number of cases in Pakistan is “below expectations” though it has yet to provide information on how much testing was being conducted in its models. Regardless, with a jump of over 1,000 cases in a single day, its reassurances ring hollow to people concerned about their loved ones or themselves contracting the disease.

The country’s most populous province recorded 393 new infections in the past 24 hours, raising its total confirmed COVID-19 cases to 6,733. Punjab has also reported 9 new deaths, bringing its casualty count to 115.

Overall, the province has reported 2,205 recoveries, leaving 4,413 active cases, 100 more than a day earlier. The majority of the cases continue to be reported from Lahore, with nearly 2,000 of the total infections having been found there.

Punjab Health Minister Dr. Yasmin Rashid has defended the recent reduction in tests administered in the province by claiming the previous focus was on quarantine centers and foreign cases, and a shift to local transmission and random sampling had required a rethink of the methodology being applied. She warned that as testing increased once more, the number of confirmed infections would inevitably rise.

Sindh Chief Minister Murad Ali Shah on Friday announced that 45 patients were currently in critical condition, with 16 of them on ventilators. He also warned that the flights returning stranded Pakistanis from abroad were emerging as new virus clusters.

Of 483 passengers who landed at Karachi airport via three flights from Dubai, Sharjah and Colombo, he said 190 had tested positive for the coronavirus, with 92 of them from Sindh, 56 from Punjab, 24 from Khyber-Pakhtunkhwa, and 18 from Balochistan. He also said the virus was continuing to spread daily and extra precautionary measures must be taken to curb it. 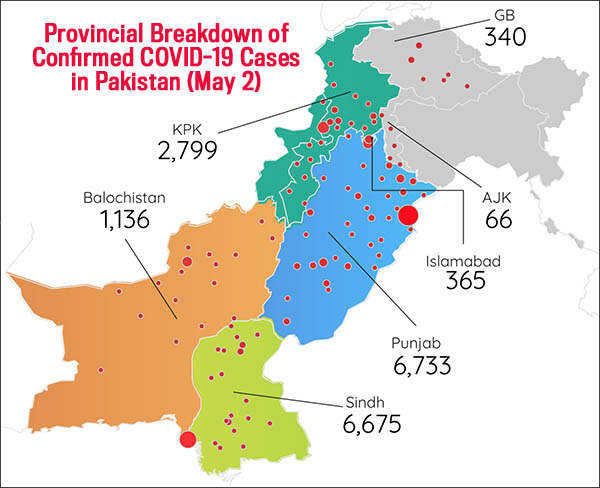 The province continues to report the highest fatality rate due to COVID-19 in Pakistan, with the tally climbing to 161 from 146 a day earlier. Overall, the province has now recorded 2,799 confirmed cases of the novel coronavirus, with 690 recoveries. It currently has 1,948 active cases, 121 more than 24 hours ago.

The record single-day COVID-19 death toll has prompted the provincial government to go for stricter enforcement of lockdown and social distancing rules. It has announced that traders violating government guidelines on safely operating the businesses would be dealt with strictly and have their shops sealed. Additionally, essential businesses would be allowed to operate after they fulfill the requirements to ensure social distancing rules and adherence to SOPs.

The province has thus far reported 1,136 confirmed cases of the novel coronavirus, with 16 deaths and 183 recoveries. It currently has 937 active cases, 85 more than 24 hours earlier. Per the Balochistan Health Department, 86 of the new infections were reported from provincial capital Quetta while 1 was reported from Pishin.

The province has reported 2 new deaths in the past 24 hours.

Provincial government spokesman Liaquat Shahwani says efforts are underway to increase daily testing capacity to 800 to ensure that a maximum number of infections can be rooted out to curb the spread of the novel coronavirus.

Islamabad on Saturday morning raised its confirmed COVID-19 infections to 365, with no new deaths or recoveries. Thus far, the Islamabad Capital Territory has reported 4 deaths and 44 recoveries, leaving 317 active cases, 22 more than a day earlier.

In Gilgit-Baltistan, cases of the novel coronavirus rose to 340, with no new deaths and 7 new recoveries. Overall, 3 deaths have been reported from the region and 255 recoveries, leaving 82 active cases, 9 less than a day earlier.

There were no new tests conducted in Pakistan-administered Kashmir in the past 24 hours, and consequently the region has not recorded any new infections, deaths or recoveries. Overall, it has 66 confirmed cases and 43 recoveries, leaving 23 active cases.

Globally, the virus has now infected more than 3,401,189 people, with over 239,600 reported deaths. Governments across the world have halted flights, locked down towns and cities and urged people to stay at home, but there are signs of easements to help shuttered economies recover. Overall, around 1,081,600 patients of the 3.4 million+ infected have recovered thus far.