For a third consecutive day, Pakistan on Sunday witnesses a dramatic surge in both new coronavirus infections, and deaths caused by the disease, as government officials suggested to citizens that this was the “new normal” they would have to learn to deal with.

In the 24-hour period preceding 8:30 a.m. Sunday, Pakistan reported a record 3,039 new infections of COVID-19, raising its total confirmed cases to 69,496. Similarly, 88 deaths were recorded—another new peak—raising the death toll from the virus to 1,483. Nationwide, 14,972 tests were administered—far short of the 30,000/day the government had claimed it would achieve by the end of May—while 1,140 patients reported making full recoveries, raising to 25,271 the people who have overcome the deadly virus.

There are currently 42,742 active cases of the coronavirus in the country.

Addressing a media briefing on Saturday, Special Assistant to the P.M. on Health Dr. Zafar Mirza reiterated that the government was making face masks mandatory for anyone going to crowded public places, mosques, bazaars, shopping malls, or using public transport. However, as with most policy guidelines issued in the fight against COVID-19, the guideline provides no penalties for people violating the “mandatory” order, making its implementation difficult for law enforcement personnel.

District administrators have claimed anyone not wearing masks can be charged under Section 188 of the Code of Criminal Procedure, which deals with “disobedience to order promulgated by a public servant” but this is open to legal challenges.

According to Mirza, the recovery rate of coronavirus patients in Pakistan now stands at 36 percent, against a fatality rate of 2.1 percent. He said local transmission had increased to 92 percent, and claimed—to dismissals on social media by healthcare workers—that only 25 percent of the country’s healthcare infrastructure had been utilized thus far.

Provincial Health Minister Dr. Yasmin Rashid on Saturday told a press briefing that after having issued social distancing guidelines to curb the spread of the coronavirus, it was now up to citizens on whether or not they valued their lives. “This life is yours, protecting it is your responsibility,” she said, adding that despite the rising number of infections nationwide, businesses could not be shut down and people would just have to learn with it.

On Sunday, Pakistan’s most populous province officially became the region worst-affected by the coronavirus, as it’s death toll increased by 36 to 475, exceeding all other provinces and federally administered areas.

The province also reported 952 new infections, raising confirmed cases to 25,056, against 6,901 recoveries. There are now 17,680 active cases of the virus in Punjab province.

Chief Minister Murad Ali Shah, in his daily press briefing, voiced concern that the coronavirus situation in the country was progressing from “bad to worse.” Noting that the fatality rate was now on the rise—having gone from less than 1.5 percent to more than 2 percent—he said the biggest concern was the growing gap between new infections and those who have recovered. “This is putting the provincial healthcare system at risk,” he said.

The total number of confirmed COVID-19 cases in the province on Sunday morning rose to 27,360. Additionally, the province raised its casualties by 38 to 465, while its recoveries rose to 13,272. Overall, the province now has 13,623 active cases of the novel coronavirus. 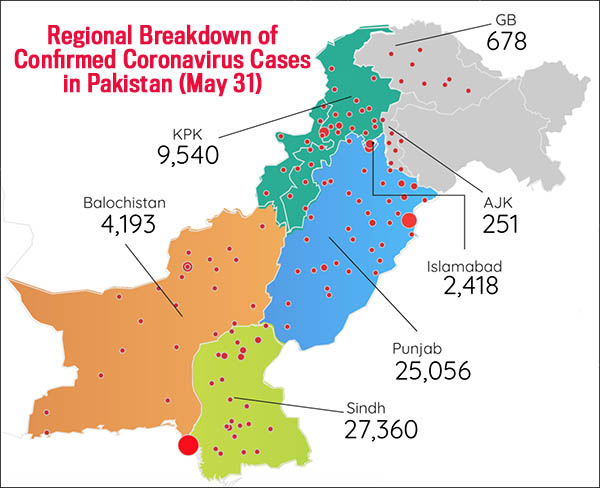 Amid increasing reports that Peshawar’s major hospitals are running out of space and turning patients away, Adviser to the C.M. Ajmal Wazir on Saturday claimed this was untrue. In a press briefing, he issued details about available facilities in various major hospitals, adding that the government was striving to ensure the healthcare system would not get overburdened.

On Sunday, the province reported 8 new deaths, raising its death toll to 453. In the same time period, its recoveries rose to 2,809, while its confirmed cases have increased by 473 to 9,540.

There are currently 6,278 active cases of coronavirus in the province.

The government of Balochistan has become the first in Pakistan to revise its policy on measuring deaths caused by COVID-19 to include those that have occurred in homes and were likely to be caused by the virus. Addressing a press briefing, spokesman Liaquat Shahwani said the provincial health department had surveyed total deaths at hospitals and homes in the past two weeks, and determined that 30 people had likely died due to coronavirus at their homes.

Shahwani said authorities had also witnessed a rise in deaths caused by malaria and typhoid, and urged people to get tested for the diseases if they had fever symptoms.

Overall, there are currently 4,193 confirmed cases of the novel coronavirus in the province, with 46 deaths and 1,471 recoveries. It currently has 2,676 active cases of COVID-19.

Islamabad on Sunday raised its confirmed COVID-19 infections to 2,418, with 27 deaths and 169 recoveries. Presently, the Islamabad Capital Territory has 2,222 active cases of the novel coronavirus.

In Gilgit-Baltistan, cases of the novel coronavirus rose to 678. Overall, it has thus far reported 11 deaths and 490 recoveries, leaving 177 active cases.

In Pakistan-administered Kashmir, confirmed cases have increased to 251. It has also reported 6 deaths and 159 recoveries, leaving 86 active cases of the virus.

Globally, the virus has now infected more than 6,160,429 people, with over 371,000 reported deaths. Governments across the world have halted flights, locked down towns and cities and urged people to stay at home, but there are signs of easements to help shuttered economies recover. Overall, around 2,738,290 patients of the 6.1 million+ infected have recovered thus far.