Pakistan on Tuesday reported 1,013 new infections of the novel coronavirus after conducting 17,783 tests—a positivity ratio of 5.7 percent. This is the lowest positivity ratio recorded in the country in more than two months.

Despite the optimism due to Pakistan’s declining positivity rate, hailed by lawmakers and government officials, health experts have warned that the country has yet to fully utilize its claimed capacity of 71,780—and is testing significantly below numbers proposed by global health experts, likely only recording the most symptomatic patients while ignoring the spread among asymptomatic carriers.

The Punjab government on Monday submitted a proposal to the federal government to shut down all shopping malls, business centers and bazaars three days ahead of Eidul Azha to curb the spread of coronavirus in the province. The final decision on this would be taken by the NCOC, though it goes against the prime minister’s stated claims of not wanting a lengthy break for this Eid.

On Tuesday, authorities reported 7 new deaths due to COVID-19, raising total fatalities to 2,090. The province also reported 253 new infections, raising confirmed cases to 90,444, against 66,021 recoveries. There are now 22,333 active cases of the virus in Punjab province.

In a statement, Chief Minister Murad Ali Shah on Monday said the province now boasted a 81% recovery rate from COVID-19, adding that the majority of new infections were still being reported from provincial capital Karachi.

Provincial Labor and Culture Minister Shaukat Yousafzai on Monday said the government was developing guidelines to reopen the region’s tourism industry after Eidul Azha. He told a private TV channel that the guidelines would be strictly enforced, adding both tourists and the industry would have to abide by them.

The provincial government on Tuesday reported 5 new deaths, raising its death toll to 1,147. In the past 24 hours, its recoveries rose to 25,367, while its confirmed cases have increased by 157 to 32,243. There are currently 5,729 active cases of coronavirus in the province.

Spokesman Liaquat Shahwani has claimed new infections of COVID-19 are gradually decreasing in the province, crediting the “smart lockdown” policy for this reduction. He told journalists in Quetta that the provincial government was considering further easing movement restrictions if this trend continued.

Confirmed cases of the novel coronavirus in the province on Tuesday rose by 5 to 11,441. Overall, 133 people have died and 9,061 patients have fully recovered from the virus, leaving 2,247 active cases of COVID-19. 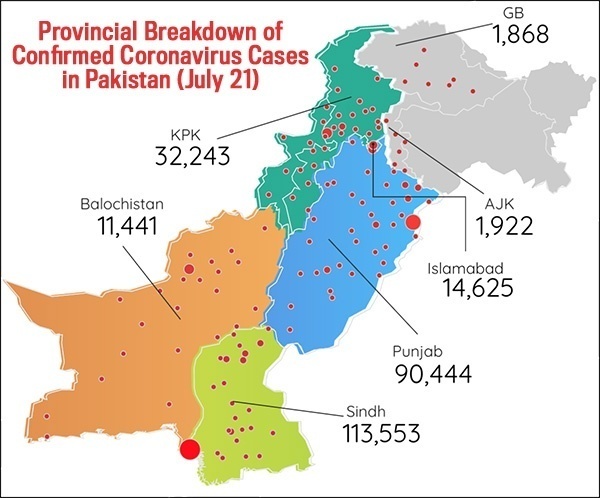 Confirmed cases of the novel coronavirus in Gilgit-Baltistan rose by 19 on Tuesday to 1,868. The region reported no new deaths, sustaining toll at 43, while its recoveries have increased by 9 to 1,481, leaving 344 active cases.

In Pakistan-administered Kashmir, confirmed cases have increased by 7 to 1,922. There were no new deaths and 53 recoveries in the past 24 hours, leaving 47 fatalities and 1,254 fully recovered. It has 621 active cases of COVID-19.

Globally, the virus has now infected more than 14,855,107 people, with over 613,248 reported deaths. Governments across the word halted flights, locked down towns and cities and urged people to stay at home at the peak of the virus’s spread, but there are now signs of easements in nations that have reined it in to help shuttered economies recover. Overall, around 8,907,167 patients of the 14.8 million+ infected have recovered thus far.