In its deadliest day thus far, Pakistan on Tuesday reported 105 deaths due to the novel coronavirus, raising its total fatalities due to the disease to 2,172.

The country, which “will reach its peak by end-July or August,” according to Prime Minister Imran Khan, recorded 4,646 new infections against 24,620 tests—a positive ratio of 18.87 percent—raising confirmed cases to 108,317.

In the 24 hours preceding 8 a.m., Tuesday, 663 patients tested negative, raising recoveries to 35,018. There are currently 71,127 active cases of the coronavirus in the country, with the National Command and Operation Center reporting 1,489 of those are in critical condition.

The prime minister, in his latest press statement, reiterated his claims that lockdowns cannot halt the spread of COVID-19, merely slow it down. Urging citizens to adopt Standard Operating Procedures such as masks in public places and social distancing, he said that if everyone took care, Pakistan could emerge from this “crisis” without having suffered as much as some western nations.

Chief Minister Usman Buzdar, in a statement, said that any individual found violating SOPs would be strictly punished under law. “We have to live with this virus by taking all the precautionary measures,” he added.

According to the Punjab Health Department, 763 ventilators in various hospitals across the province have been dedicated for COVID-19 patients. Additionally, hospitals have 9,000 beds in coronavirus wards, of which 7,025 are currently vacant, it claimed.

On Tuesday, authorities reported 58 new deaths due to COVID-19, raising total fatalities to 773. The province also reported 1,916 new infections, raising confirmed cases to 40,819, against 8,293 recoveries. There are now 31,753 active cases of the virus in Punjab province.

Chief Minister Murad Ali Shah on Monday announced that the province was now utilizing 99 percent of its testing capacity, adding the province had witnessed a positive ratio to 16.5 percent in terms of overall cases and tests.

The total number of confirmed COVID-19 cases in the province on Tuesday morning rose to 39,555. Additionally, the province’s death toll climbed by 29 to 679, while its recoveries rose to 19,137. Overall, the province now has 19,739 active cases of the novel coronavirus, exhibiting a recovery rate of nearly 50 percent.

The provincial government on Monday reiterated its resolve to seal shops and areas that witnessed violations of SOPs. A meeting presided over by Chief Minister Mahmood Khan directed officials to close down the premises that failed to implement guidelines, while also reviewing capacity in public sector hospitals across the province.

There are currently 9,840 active cases of coronavirus in the province. 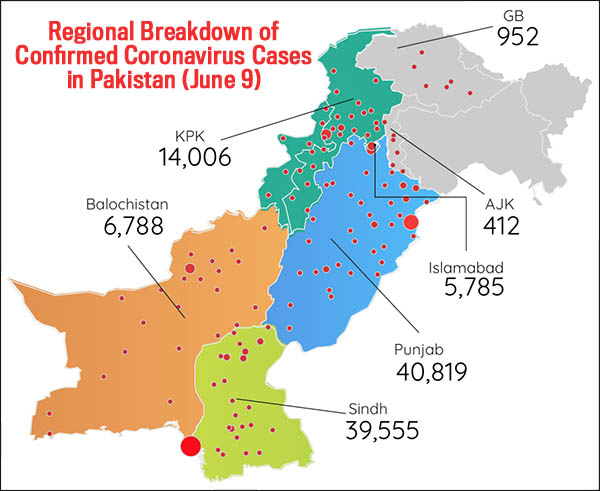 The provincial government on Monday warned that any form of public transport found violating SOPs would face renewed restrictions. Spokesman Liaquat Shahwani said there was no way to halt the spread of the novel coronavirus without public support. “The novel coronavirus has spread to 31 districts in Balochistan,” he said.

Overall, confirmed cases of the novel coronavirus in the province rose by 272 to 6,788, with 4 new deaths, raising to 58 the deaths caused by the disease. Overall, 2,360 patients have recovered from the deadly virus, while there are currently 4,370 active cases of COVID-19.

On Tuesday, the Islamabad Capital Territory raised its confirmed coronavirus infections by 456 to 5,785, with no new deaths sustaining the death toll to 52. Overall there have been 843 recoveries, leaving 4,890 active cases of COVID-19.

Confirmed cases of the novel coronavirus in Gilgit-Baltistan rose by 20 to 952 on Tuesday morning. Overall, the region has thus far reported 14 deaths and 597 recoveries, leaving 341 active cases.

In Pakistan-administered Kashmir, confirmed cases increased by 16 to 412. In the past 24 hours, the region has reported 1 new death and 14 recoveries, leaving 9 total deaths and 209 recoveries. There are now 194 active cases of the coronavirus in the region.

Globally, the virus has now infected more than 7,199,329 people, with over 408,735 reported deaths. Governments across the world have halted flights, locked down towns and cities and urged people to stay at home, but there are signs of easements in nations that have reined in the virus’ spread to help shuttered economies recover. Overall, around 3,536,322 patients of the 7.1 million+ infected have recovered thus far.