Special Assistant to the P.M. on Health Dr. Zafar Mirza, ostensibly heading the public health response to the COVID-19 pandemic, resigned on Wednesday, leaving Pakistan with no health minister as it heads into Eidul Azha. Government officials, doctors, and lawmakers have all been cautioning against complacency, fearing that the festivities could provoke another surge in coronavirus infections. Prime Minister Imran Khan has yet to notify a new health minister.

While observers have hailed Pakistan’s positivity rate declining from over 20 percent to less than 10 percent in the past month, health experts have warned that the country has yet to fully utilize its claimed capacity of 71,780—and is testing significantly below numbers proposed by global health experts. According to the World Health Organization, the country is likely only recording the most symptomatic patients while ignoring the spread among asymptomatic carriers.

“We cannot afford [another] situation like Eidul Fitr now that cases are decreasing considerably. Any mistake can spoil government efforts,” warned Punjab Governor Chaudhry Muhammad Sarwar on Wednesday. He urged the public to take the pandemic seriously and adopt social distancing measures to curb the spread of the virus over the upcoming Eidul Azha.

On Thursday, authorities reported 5 new deaths due to COVID-19, raising total fatalities to 2,138. The province also reported 203 new infections, raising confirmed cases to 92,655, against 82,520 recoveries. There are now 7,997 active cases of the virus in the province.

The provincial government, in contrast to Punjab, has opted against closing markets and shopping centers ahead of Eidul Azha, Information Minister Nasir Hussain Shah said on Wednesday. The existing lockdown restrictions would not be further tightened, he said, adding that SOPs would be strictly enforced.

Local officials have claimed that the World Health Organization has expressed concern over the continuously declining testing for COVID-19 in the province, adding it has asked the government to scale up testing capacity to accurately determine the true spread of the virus. According to the officials, Khyber-Pakhtunkhwa has recorded 19 percent positivity, which is the highest for any province of the country.

The provincial government on Thursday reported 6 new deaths, raising its death toll to 1,192. In the past 24 hours, its recoveries rose by 593 to 28,317, while its confirmed cases have increased by 121 to 33,845. There are currently 4,336 active cases of coronavirus in the province. 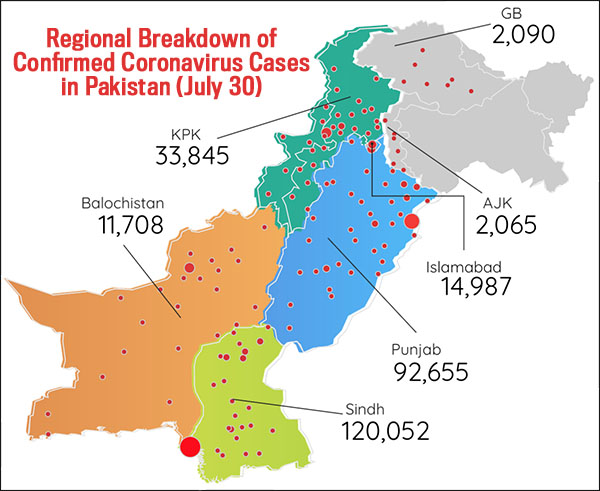 Provincial spokesman Liaquat Shahwani has warned that the government would re-enforce a complete lockdown if cases surged after Eidul Azha, as he urged the public and traders to adopt social distancing and ensure they were in compliance with all SOPs introduced to curb the spread of the virus.

Confirmed cases of the novel coronavirus in the province on Thursday rose by 54 to 11,708. Overall, 136 people have died and 10,097 patients have fully recovered from the virus, leaving 1,475 active cases of COVID-19.

Islamabad on Thursday raised its confirmed coronavirus cases by 24 to 14,987. There were no new deaths or recoveries in the past 24 hours, sustaining death toll at 165 and recoveries at 12,377, leaving 2,445 active cases.

Confirmed cases of the novel coronavirus in Gilgit-Baltistan rose by 48 on Thursday to 2,090. The region reported 3 new deaths, raising toll to 53, while its recoveries have increased by 35 to 1,693, leaving 344 active cases.

In Pakistan-administered Kashmir, confirmed cases have increased by 10 to 2,065. There was 1 death and 40 recoveries in the past 24 hours, leaving 51 fatalities and 1,583 fully recovered. It has 431 active cases of COVID-19.

Globally, the virus has now infected more than 17,187,414 people, with over 670,202 reported deaths. Governments across the word halted flights, locked down towns and cities and urged people to stay at home at the peak of the virus’s spread, but there are now signs of easements in nations that have reined it in to help shuttered economies recover. Overall, around 10,697,975 patients of the 17.2 million+ infected have recovered thus far.