Pakistan on Tuesday reported 1,167 infections of the novel coronavirus after conducting 27,984 tests—a positivity ratio of 4.17 percent.

The Civil Aviation Authority on Monday issued new guidelines, banning anyone other than a driver from coming to pick up or drop off a passenger at any airport in Pakistan. In a statement, it said that the directives had been issued on the orders of the Government of Pakistan to curb the spread of the novel coronavirus. 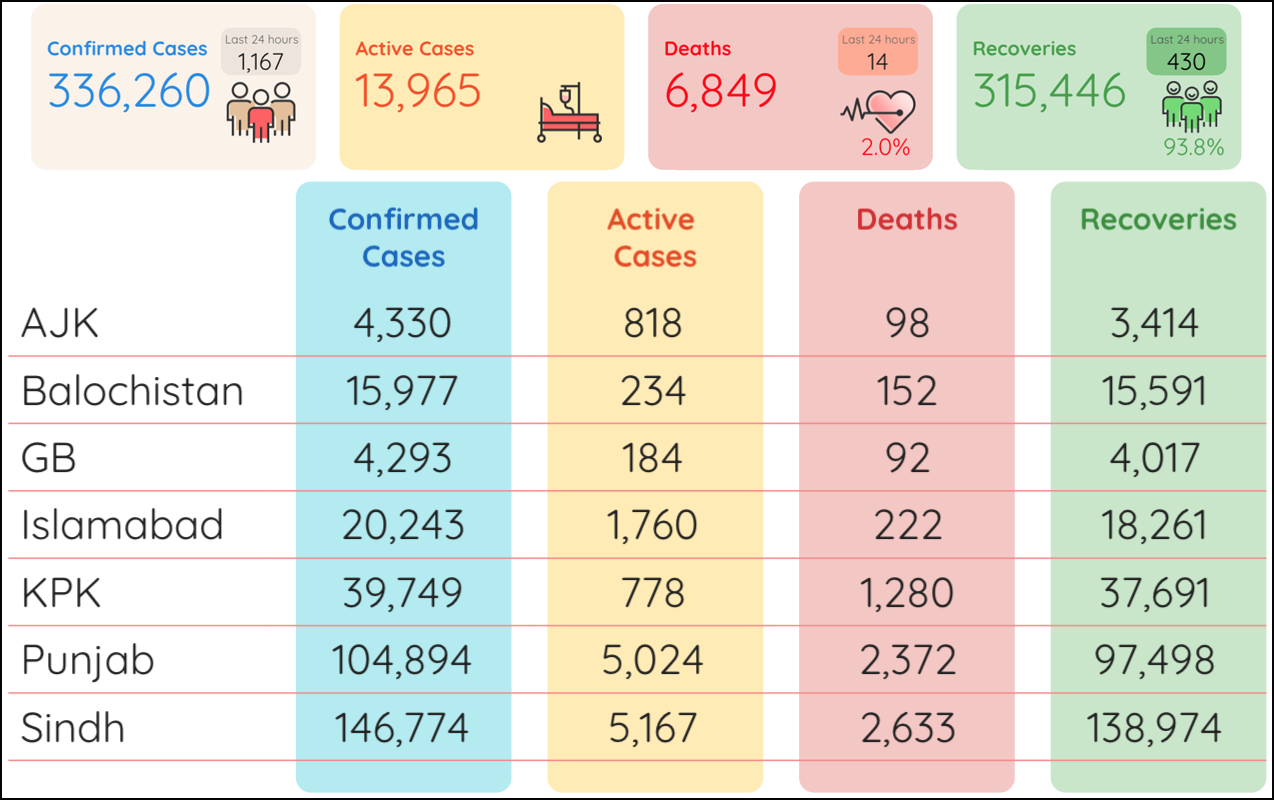 On Tuesday, authorities reported 7 new deaths due to COVID-19, raising fatalities to 2,372. The province raised its confirmed cases to 104,894 with 340 new infections after conducting 9,030 tests. Meanwhile, its recoveries have increased by 27 to 97,498. There are now 5,024 active cases of the virus in the province.

The provincial government on Tuesday reported 1 death, raising toll to 1,280. In the past 24 hours, its recoveries rose by 49 to 37,691 while its confirmed cases have increased by 100 to 39,749 after conducting 3,665 tests. The province currently has 778 active cases of coronavirus.

The province has raised its confirmed cases to 15,977 with 23 new infections after conducting 597 tests. There was 1 new death and 22 recoveries in the past 24 hours, leaving 152 fatalities and 15,591 recoveries. There are now 234 active cases of COVID-19 in the province.

Confirmed cases of the novel coronavirus in Gilgit-Baltistan on Tuesday increased by 14 to 4,293 after conducting 405 tests. The region reported no new deaths and 31 recoveries, leaving 92 fatalities and 4,017 recoveries. There are currently 184 active cases of COVID-19 in the region.

Globally, the virus has now infected more than 47,319,160 people, with over 1,211,268 reported deaths. Governments across the word halted flights, locked down towns and cities and urged people to stay at home at the peak of the virus’s spread, but have since eased restrictions to help shuttered economies rebound. With a second wave now emerging, countries with new spikes have started to re-impose movement restrictions. Overall, around 34,033,770 patients of the 47.3 million+ infected have recovered thus far.