Special Assistant to the P.M. on Health Dr. Zafar Mirza on Sunday reiterated concerns that the current decline in new infections of COVID-19 could be reversed in short order if the public ignored social distancing guidelines and other preventative measures ahead of, and during, Eidul Azha. “We will certainly be facing challenges on Eiul Azha, and Ashura, which may lead to another spike in coronavirus outbreak,” he said and urged the public to opt for online booking of sacrificial animals rather than visiting cattle markets.

The provincial government has hinted at imposing “smart lockdowns” in various cities ahead of, and during, Eidul Azha to curb the spread of COVID-19. A meeting chaired by the Punjab chief secretary decided that this would primarily focus on markets and shopping centers where large numbers of people gathering during the festival. Per sources, plans are to shut down markets from a day or two before Eid till Aug 2.

On Monday, authorities reported no new deaths due to COVID-19, sustaining total fatalities at 2,116. The province also reported 172 new infections, raising confirmed cases to 92,073, against 81,260 recoveries. There are now 8,697 active cases of the virus in the province.

Prison authorities in the province last week started Pakistan’s first mass COVID-19 screening program, in the hope to head off any potential outbreaks in overcrowded detention centers. Senior officials said they had determined sample sizes for all prisons, adding the exercise would likely take about a month to complete.

In a statement, Chief Minister Mahmood Khan on Sunday urged members of his cabinet, provincial lawmakers and citizens to celebrate Eidul Azha with simplicity and avoid visiting any tourist spots. He also said people should avoid embracing each other this year, and should also skip large public gatherings.

The provincial government on Monday reported 2 new deaths, raising its death toll to 1,178. In the past 24 hours, its recoveries rose by 102 to 27,119, while its confirmed cases have increased by 177 to 33,397. There are currently 5,100 active cases of coronavirus in the province.

Provincial spokesperson Liaquat Shahwani on Sunday warned that there was risk of a surge in coronavirus infections if people stop adopting preventative measures over Eidul Azha. He told a press conference in Quetta that infections had declined by 60 percent in the past month, adding that 85 percent of Covid-19 patients had recovered in the province.

Confirmed cases of the novel coronavirus in the province on Monday rose by 51 to 11,601. Overall, 136 people have died and 9,976 patients have fully recovered from the virus, leaving 1,489 active cases of COVID-19. 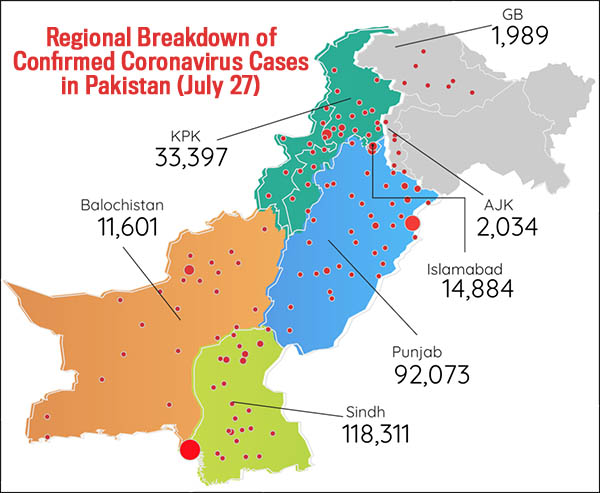 Islamabad on Monday raised its confirmed coronavirus cases by 43 to 14,884. There was 1 new death and no new recoveries in the past 24 hours, raising death toll to 164 and sustaining recoveries at 12,253, leaving 2,467 active cases.

Confirmed cases of the novel coronavirus in Gilgit-Baltistan rose by 37 on Monday to 1,989. The region reported 1 new death, raising toll to 48, while its recoveries have increased by 7 to 1,566, leaving 375 active cases.

In Pakistan-administered Kashmir, confirmed cases have increased by 11 to 2,034. There were no new deaths and 14 recoveries in the past 24 hours, leaving 49 fatalities and 1,449 fully recovered. It has 536 active cases of COVID-19.

Globally, the virus has now infected more than 16,418,865 people, with over 652,250 reported deaths. Governments across the word halted flights, locked down towns and cities and urged people to stay at home at the peak of the virus’s spread, but there are now signs of easements in nations that have reined it in to help shuttered economies recover. Overall, around 10,047,300 patients of the 16.4 million+ infected have recovered thus far.