Pakistan Reports 136 Deaths Due to COVID-19 in Single Day

Major urban centers such as Lahore, Rawalpindi, Islamabad, Karachi, and Peshawar on Tuesday started “selectively” locking down viral hotspots with several neighborhoods that have witnessed a surge in new infections now under renewed movement restrictions. The government believes imposing lockdowns on entire cities would impact livelihoods too much, and has opted for the ‘selective’ policy as part of its test, trace, quarantine strategy.

The provincial government on Tuesday came under fire after health minister Dr. Yasmin Rashid claimed in a TV appearance that her constituents were “so ignorant and uneducated” that no amount of public awareness could convince them to adopt social distancing guidelines.

This adds to a pattern of the incumbent Pakistan Tehreek-e-Insaf government seeking to offload all blame for the rising number of cases to the public, claiming everyone must now “learn to live with the virus.” Prime Minister Imran Khan, last week, also claimed that it was entirely the “public’s responsibility how good or bad the [coronavirus] situation would get in the coming weeks.”

On Wednesday, authorities reported 68 new deaths due to COVID-19, raising total fatalities to 1,149. The province also reported 2,361 new infections, raising confirmed cases to 58,239, against 17,780 recoveries. There are now 39,310 active cases of the virus in Punjab province.

The provincial assembly has amended its rules to allow for conducting sessions online in case of emergency situations such as the ongoing pandemic. As part of the “selective lockdown” policy, authorities have also submitted a list of areas in Karachi they would like to see sealed, though Adviser to C.M. Murtaza Wahab has said the government believes a lockdown would only be effective if it were imposed on the entire metropolis.

Confirmed cases of COVID-19 in the province on Wednesday morning climbed by 2,287 to 57,868. Additionally, the province’s death toll climbed by 33 to 886, while its recoveries rose to 29,245. Overall, the province now has 27,737 active cases of the novel coronavirus.

Authorities on Tuesday reported that 20 lawmakers, 7 percent of the total, of the provincial assembly had tested positive for the novel coronavirus thus far. Meanwhile, a sixth doctor lost his life to the virus in the province, with the Young Doctors Association saying 460 doctors of Khyber-Pakhtunkhwa had thus far been infected with COVID-19.

The province reported 24 new deaths on Wednesday morning, raising its death toll to 732. In the past 24 hours, its recoveries rose by 230 to 4,922, while its confirmed cases have increased by 635 to 19,107. There are currently 13,454 active cases of coronavirus in the province. 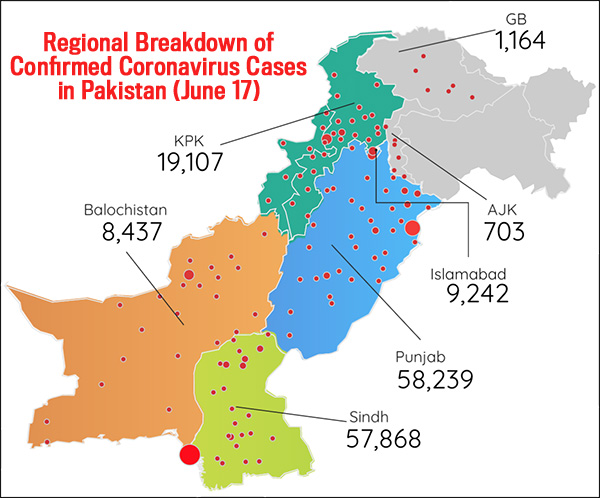 Provincial spokesman Liaquat Shahwani on Tuesday announced that the “smart lockdown” already being enforced was being extended for another 15 days to June 30. “All relaxations regarding markets, shopping malls, transport, offices, market opening and closure timings will remain the same as previously notified,” he added.

Meanwhile, authorities in Quetta said shopping malls, markets and shops would be allowed to increase their operating hours from 9 a.m. till 7 p.m.

Confirmed cases of the novel coronavirus in the province on Wednesday rose by 200 to 8,437, with 4 new fatalities raising total deaths to 89. Overall, 3,023 patients have recovered from the virus, leaving 5,325 active cases of COVID-19.

The federal capital on Wednesday raised its confirmed coronavirus cases to 9,242, with 90 fatalities. Overall there have been 2,439 recoveries, leaving 6,713 active cases of COVID-19.

Confirmed cases of the novel coronavirus in Gilgit-Baltistan have risen to 1,164. Overall, the region has thus far reported 17 deaths and 738 recoveries, leaving 409 active cases.

In Pakistan-administered Kashmir, confirmed cases increased to 703. In the past 24 hours, there have been no new deaths and 26 recoveries, sustaining death toll at 13, and increasing recoveries to 290. There are now 400 active cases of the coronavirus in the region.

Globally, the virus has now infected more than 8,264,400 people, with over 446,135 reported deaths. Governments across the world have halted flights, locked down towns and cities and urged people to stay at home, but there are signs of easements in nations that have reined in the virus’ spread to help shuttered economies recover. Overall, around 4,321,495 patients of the 8.2 million+ infected have recovered thus far.