Pakistan on Saturday reported 1,637 new infections of the novel coronavirus, a slight dip from its highest single-day spike 24 hours earlier, as the government reiterated that ongoing movement restriction could only be completely abolished with the people’s cooperation.

In a tweet, Information Minister Shibli Faraz warned the government would have to re-impose a harsher lockdown if precautionary measures to curb the spread of COVID-19 were not observed.

Over the past 24 hours, Pakistan has recorded 24 new deaths and 226 recoveries, raising the total fatalities to 618 and overall recoveries to 7,756, respectively.

According to the National Command and Operation Center, Pakistan administered 12,982 tests in the past 24 hours, a new record, bringing to 270,025 the total tests conducted since the virus first emerged in Pakistan at the end of February. This number does not, however, mean that over 270,000 Pakistanis have been tested for COVID-19, as multiple retests are required for every patient before they are allowed to leave quarantine.

Overall, Pakistan currently has 19,100 active cases of the novel coronavirus, 1,387 more than a day earlier.

The Government of Pakistan, led by Prime Minister Imran Khan, maintains that the spread of COVID-19 in the country is “within projections” and it is now time to open up various sectors of the economy to overcome the impact of the pandemic. However, healthcare professionals have claimed the opposite, warning the situation is rapidly spiraling out of control and urged the government to extend and further strengthen existing movement restrictions rather than ease them.

The country’s most populous province on Saturday hit 10,471 confirmed cases of the novel coronavirus. A significant portion of these are returning pilgrims from Iran—most of whom have now tested negative for COVID-19—and members of the Tablighi Jamaat, many of whom have also completed their quarantine period.

Meanwhile, its death toll climbed to 191, as it recorded another 8 deaths.

Thus far, the province has also reported 4,131 recoveries, leaving 6,149 active cases, 361 more than a day earlier. The majority of the cases continue to be reported from provincial capital Lahore, according to the Punjab Disaster Management Authority, though the government has not reflected this in any additional precautionary measures for the urban center.

Sindh Chief Minister Murad Ali Shah on Friday clarified that the ease in lockdown from today (Saturday) would only apply on the construction sector and small shops and neighborhood markets. “The ban on public transport—air, road and rail—would continue,” he said, referring to reports that public transport was being resumed on the orders of the federal government.

However, Sindh traders had claimed they would reopen their markets, including major shopping malls that remain shut nationwide, from Friday, potentially creating a tense situation in the coming week.

On Saturday morning, the total number of confirmed COVID-19 cases in Sindh rose to 9,691, with 598 new infections recorded. Additionally, the province recorded 5 new deaths, raising its casualties to 176, while its recoveries rose by 87 to 1,940. 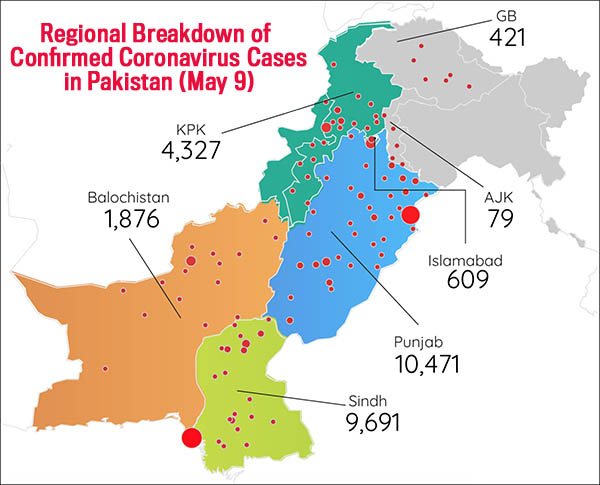 The province continues to report the highest fatality rate in Pakistan, reaching 221 deaths on Saturday morning, 12 more than a day earlier. Overall, the province has now recorded 4,327 confirmed cases of the novel coronavirus, with 1,033 recoveries.

The province has thus far reported 1,876 confirmed cases of the novel coronavirus, with 24 deaths and 222 recoveries. It currently has 1,630 active cases, 246 more than a day earlier. The province has reported no new deaths in the past 24 hours, and 13 new recoveries.

Islamabad on Saturday raised its confirmed COVID-19 infections to 609, with no new deaths and 16 recoveries. Thus far, the Islamabad Capital Territory has reported 4 deaths and 72 recoveries, leaving 533 active cases, 51 more than a day earlier.

In Gilgit-Baltistan, cases of the novel coronavirus rose to 421, with no new deaths and 6 new recoveries. Overall, 3 deaths due to COVID-19 have been reported from the region, and 298 recoveries, leaving 120 active cases, 21 more than a day earlier.

In Pakistan-administered Kashmir, the total number of confirmed cases climbed by 1 to 79, with no deaths and 2 new recoveries. Overall, it has 19 active cases of the virus, 1 less than a day earlier.

Globally, the virus has now infected more than 4,014,300 people, with over 276,230 reported deaths. Governments across the world have halted flights, locked down towns and cities and urged people to stay at home, but there are signs of easements to help shuttered economies recover. Overall, around 1,387,180 patients of the 4 million+ infected have recovered thus far.