Pakistan on Monday reported 1,650 infections of the novel coronavirus after conducting 33,340 tests—a positivity ratio of 4.95 percent.

The National Command and Operation Center (NCOC) over the weekend issued new guidelines making face masks mandatory in all public spaces, with a Rs. 100 fine imposed on anyone who isn’t wearing one. In addition, cities with high rates of transmission—Lahore, Karachi, Islamabad, Rawalpindi, Multan, Hyderabad, Gilgit, Muzaffarabad, Mirpur, Peshawar, Quetta, Gujranwala, Gujrat, Faisalabad, Bahawalpur, Abbottabad—would have indoor weddings banned from Nov. 20, while outdoor weddings would have a limit of 1,000 guests; and all public and private offices would be required to have 50 percent of their staff work from home. 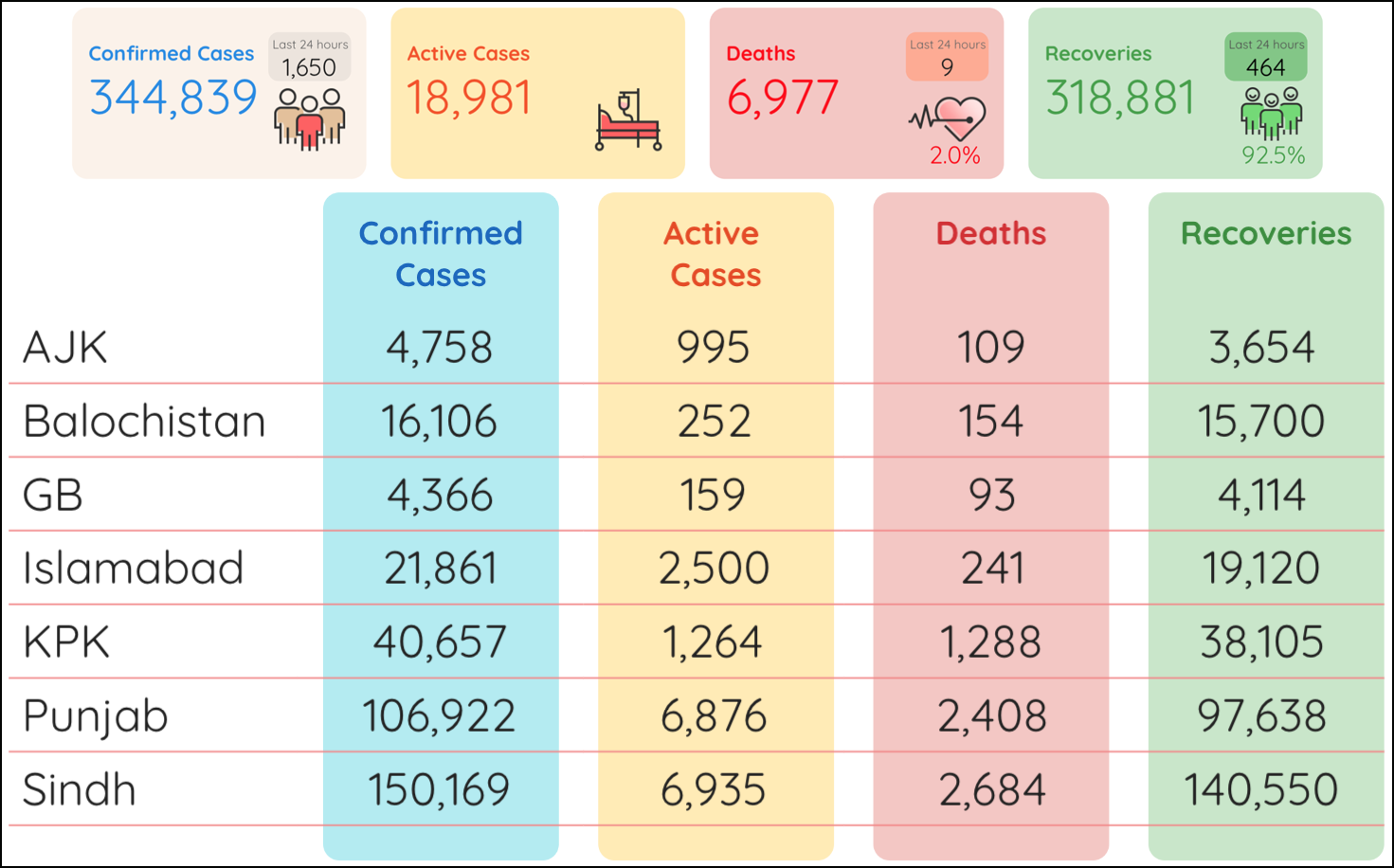 On Monday, authorities reported 1 new death due to COVID-19, raising fatalities to 2,408. The province raised its confirmed cases to 106,922 with 345 new infections after conducting 9,406 tests. Meanwhile, its recoveries have increased by 24 to 97,638. There are now 6,876 active cases of the virus in the province.

The provincial government on Monday reported no deaths, sustaining toll at 1,288. In the past 24 hours, its recoveries rose by 84 to 38,105 while its confirmed cases have increased by 260 to 40,657 after conducting 4,052 tests. The province currently has 1,264 active cases of coronavirus.

The province on Monday raised its confirmed cases to 16,106 with 51 new infections after conducting 634 tests. There were no new deaths and 17 recoveries in the past 24 hours, leaving 154 fatalities and 15,700 recoveries. There are now 252 active cases of COVID-19 in the province.

Confirmed cases of the novel coronavirus in Gilgit-Baltistan on Monday increased by 8 to 4,366 after conducting 379 tests. The region reported no new deaths and 18 recoveries, leaving 93 fatalities and 4,114 recoveries. There are currently 159 active cases of COVID-19 in the region.

In Pakistan-administered Kashmir, 461 tests were conducted, raising confirmed cases by 55 to 4,758. There were 30 recoveries and no deaths in the past 24 hours, leaving 109 fatalities and 3,654 fully recovered. It now has 995 active cases of COVID-19.

Globally, the virus has now infected more than 50,738,093 people, with over 1,262,132 reported deaths. Governments across the word halted flights, locked down towns and cities and urged people to stay at home at the peak of the virus’s spread, but have since eased restrictions to help shuttered economies rebound. With a second wave now emerging, countries with new spikes have started to re-impose movement restrictions. Overall, around 35,795,461 patients of the 50.7 million+ infected have recovered thus far.