Despite the optimism resulting from Pakistan’s positivity rate declining from over 20 percent to less than 10 percent in a month, health experts have warned that the country has yet to fully utilize its claimed capacity of 71,780—and is testing significantly below numbers proposed by global health experts. According to the World Health Organization, the country is likely only recording the most symptomatic patients while ignoring the spread among asymptomatic carriers.

On Thursday, authorities reported 5 new deaths due to COVID-19, raising total fatalities to 2,100. The province also reported 313 new infections, raising confirmed cases to 91,129, against 66,802 recoveries. There are now 22,227 active cases of the virus in Punjab province.

Provincial government spokesman Murtaza Wahab on Wednesday said Sindh would not reopen schools from Aug. 15—as demanded by private schools—because the pandemic had not yet declined to levels where the safety of children could be guaranteed. Federal Education Minister Shafqat Mehmood had earlier announced that educational institutions would reopen from Sept. 15.

The provincial government on Wednesday announced it was investigating the recent reduction in deaths due to COVID-19 to determine whether the virus’ spread had reduced or if patients were dying at their homes without getting properly diagnosed.

The provincial government on Thursday reported 5 new deaths, raising its death toll to 1,158. In the past 24 hours, its recoveries rose by 131 to 25,713, while its confirmed cases have increased by 230 to 32,753. There are currently 5,882 active cases of coronavirus in the province. 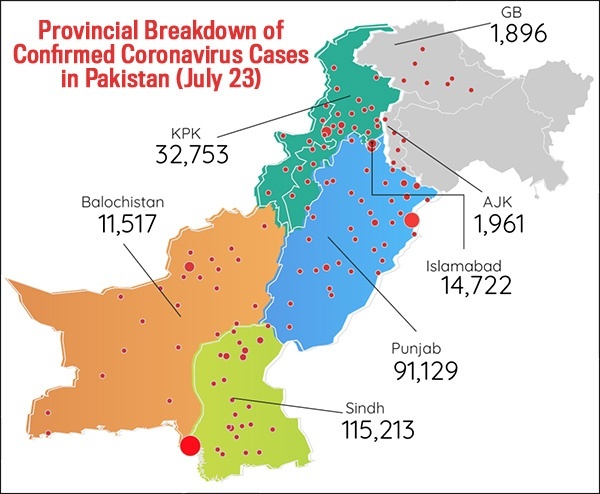 Health officials in the province have admitted that the death toll from COVID-19 could be far in excess of the official tally, noting that it is very difficult to collect accurate information about home deaths and those at hospitals in far-flung areas that still lack proper infrastructure. Geo News reported that several officials admitted that the bulk of the mortality data they have received has come from just four hospitals in Quetta.

Confirmed cases of the novel coronavirus in the province on Thursday rose by 48 to 11,517. Overall, 136 people have died and 9,585 patients have fully recovered from the virus, leaving 1,796 active cases of COVID-19.

Islamabad on Thursday raised its confirmed coronavirus cases by 21 to 14,722. There was 1 new death and no new recoveries in the past 24 hours, raising death toll to 162 and sustaining recoveries at 12,023, leaving 2,537 active cases.

Confirmed cases of the novel coronavirus in Gilgit-Baltistan rose by 18 on Thursday to 1,896. The region reported no new deaths, sustaining toll at 45, while its recoveries have increased by 13 to 1,498, leaving 353 active cases.

In Pakistan-administered Kashmir, confirmed cases have increased by 24 to 1,961. There was 1 new death and 53 recoveries in the past 24 hours, leaving 48 fatalities and 1,328 fully recovered. It has 585 active cases of COVID-19.

Globally, the virus has now infected more than 15,375,004 people, with over 630,222 reported deaths. Governments across the word halted flights, locked down towns and cities and urged people to stay at home at the peak of the virus’s spread, but there are now signs of easements in nations that have reined it in to help shuttered economies recover. Overall, around 9,349,418 patients of the 15.3 million+ infected have recovered thus far.