Pakistan on Monday reported 2,128 infections of the novel coronavirus after conducting 29,511 tests—a positivity ratio of 7.21 percent.

Prime Minister Imran Khan will preside over a meeting of the National Coordination Committee today (Monday), to formulate a strategy to curb the spread of the novel coronavirus in the country. The prime minister and members of his federal cabinet have already vowed to not impose another lockdown, so observers expect little more than bans on public gatherings and slightly harsher punishments for anyone found violating government-issued SOPs. 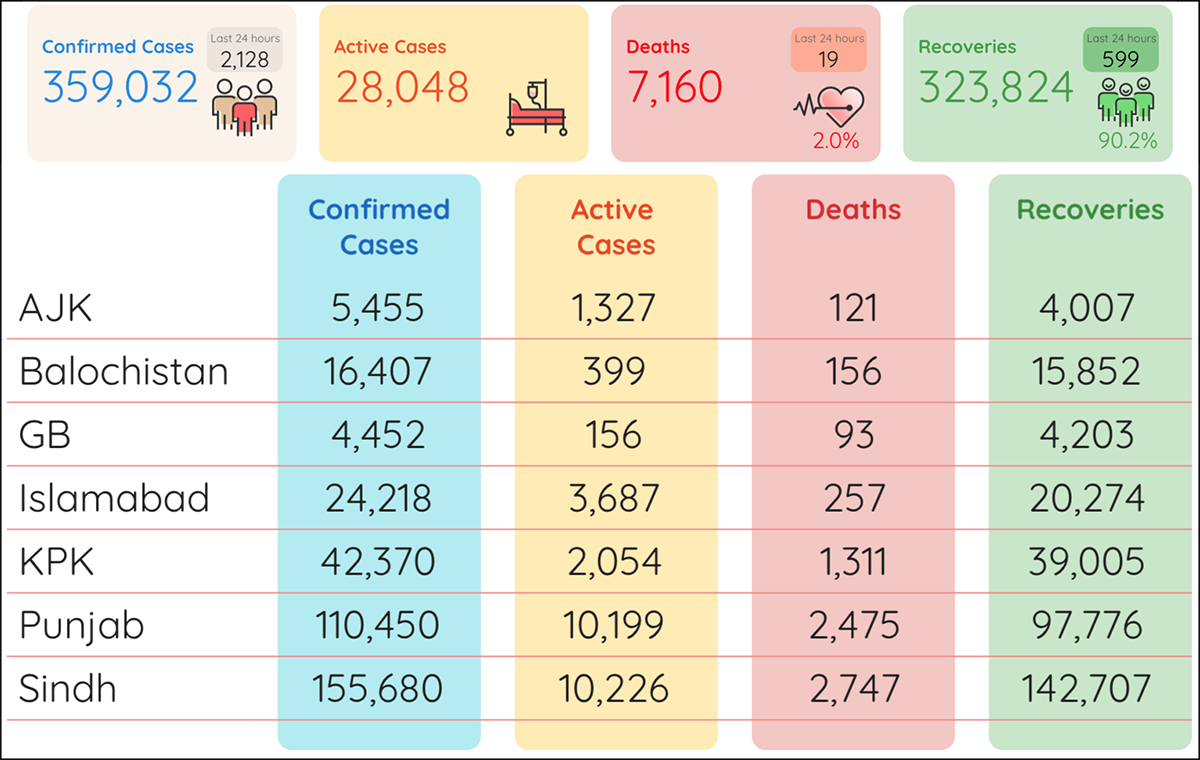 On Monday, authorities reported 4 new deaths due to COVID-19, raising fatalities to 2,475. The province raised its confirmed cases to 110,450 with 457 new infections after conducting 11,361 tests. The province reported 20 new recoveries, leaving 97,776 fully recovered, and now has 10,199 active cases of the virus.

The province on Monday raised its confirmed cases to 16,407 with 14 new infections after conducting 437 tests. There were no new deaths and 35 recoveries in the past 24 hours, leaving 156 fatalities and 15,852 recoveries. There are now 399 active cases of COVID-19 in the province.

Confirmed cases of the novel coronavirus in Gilgit-Baltistan on Monday increased by 5 to 4,452 after conducting 304 tests. The region reported no new deaths and 11 recoveries, leaving 93 fatalities and 4,203 recovered. There are currently 156 active cases of COVID-19 in the region.

Globally, the virus has now infected more than 54,817,231 people, with over 1,324,461 reported deaths. Governments across the word halted flights, locked down towns and cities and urged people to stay at home at the peak of the virus’s spread, but subsequently eased restrictions to help shuttered economies rebound. With a second wave now emerging, countries with new spikes have started to re-impose movement restrictions. Overall, around 38,138,525 patients of the 54.8 million+ infected have recovered thus far.