Information Minister Shibli Faraz has claimed that the number of COVID-19 cases in the country is declining due to the “smart lockdown.” Similarly, Planning Minister Asad Umar has claimed that the government’s policies have successfully curbed the spread of the novel coronavirus through its targeted lockdown strategy. He has said that the government is continuing to ramp up its healthcare infrastructure to cope with any potential resurgence of the virus.

While the government has hailed the reduction in new infections, claiming it proves the effectiveness of its policy, health experts have warned that the country is still testing far below its claimed capacity of 71,780—and significantly below the numbers proposed by global health experts—and is likely only recording the most symptomatic patients while ignoring the spread among asymptomatic carriers. 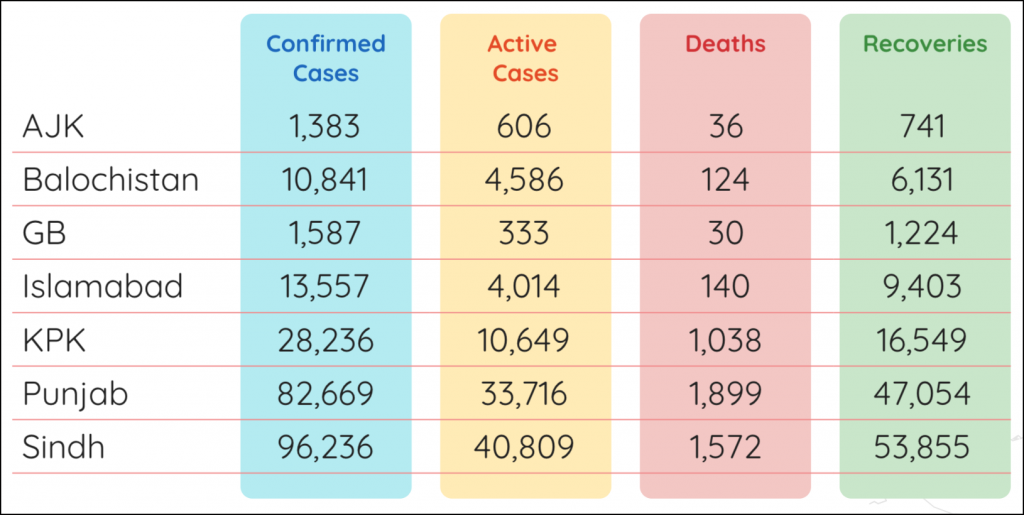 Chief Minister Usman Buzdar has said there has been a noticeable reduction in new infections of COVID-19 from areas placed under the smart lockdown. In a tweet, he said 10 to 15 coronavirus hotspots had been sealed under the prime minister’s “smart lockdown” strategy. “Random sampling also showed encouraging results. Many areas have been completely reopened,” he added.

On Tuesday, authorities reported 15 new deaths due to COVID-19, raising total fatalities to 1,899. The province also reported 706 new infections, raising confirmed cases to 82,669, against 47,054 recoveries. There are now 33,716 active cases of the virus in Punjab province.

Over the weekend, the provincial task force on COVID-19 announced that it would promote the “new normal” of mandatory face masks in public places, implement targeted lockdowns in viral hotspots, enhance testing and improve health facilities and isolation centers to curb the spread of the novel coronavirus and ensure the province did not go against the “national discourse” of saving lives and livelihoods.

Adviser to the C.M. on Information Ajmal Wazir told a press conference on Monday that the province’s recovery rate had increased to 58 percent. “We have seen very good results of smart lockdown,” he said, warning that if people stopped following SOPs, the cases would go up again and cause problems for the economy.

The provincial government on Tuesday reported 10 new deaths, raising its death toll to 1,038. In the past 24 hours, its recoveries rose to 16,549, while its confirmed cases have increased by 120 to 28,236. There are currently 10,649 active cases of coronavirus in the province. 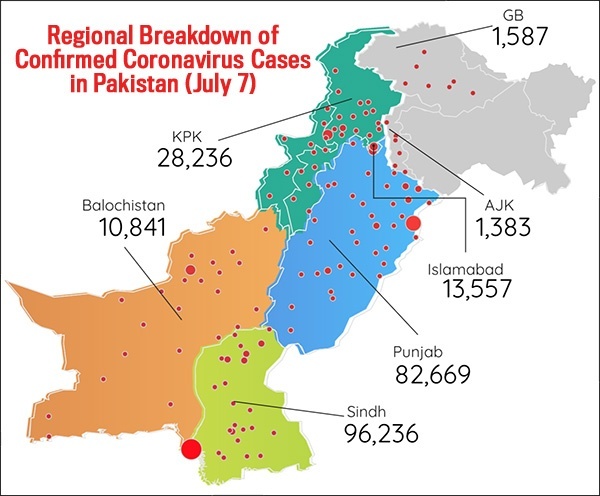 Confirmed cases of the novel coronavirus in the province on Tuesday rose by 27 to 10,841. Overall, 124 people have died and 6,131 patients have fully recovered from the virus, leaving 4,586 active cases of COVID-19.

Islamabad on Tuesday raised its confirmed coronavirus cases by 63 to 13,557. There were 3 new deaths in the past 24 hours, while 247 more people have fully recovered. Overall, 140 people have died due to COVID-19 in the federal capital against 9,403 recoveries, leaving 4,014 active cases of COVID-19.

Confirmed cases of the novel coronavirus in Gilgit-Baltistan rose by 26 on Tuesday to 1,587. The region reported 2 new deaths, raising toll to 30, while its recoveries have increased by 21 to 1,224, leaving 333 active cases.

In Pakistan-administered Kashmir, confirmed cases have increased by 41 to 1,383. There were no new deaths and 51 recoveries in the past 24 hours, leaving 36 fatalities and 741 fully recovered. It has 606 active cases of COVID-19.

Globally, the virus has now infected more than 11,744,397 people, with over 540,764 reported deaths. Governments across the world halted flights, locked down towns and cities and urged people to stay at home at the peak of the virus’s spread, but there are now signs of easements in nations that have reined it in to help shuttered economies recover. Overall, around 6,740,095 patients of the 11.7 million+ infected have recovered thus far.