The National Command and Operation Center (NCOC) has warned that there is great risk of a surge in new infections after Eidul Azha. Planning Minister Asad Umar has told local media that it is expected that people will meet families and friends and visit crowded cattle markets, which would all aid in the spread of the deadly disease. He has urged the public to exercise social distancing to prevent the surge from spiraling out of control.

Health experts, meanwhile, continue to warn that the country is still testing far below its claimed capacity of 71,780—and significantly below the numbers proposed by global health experts—and is likely only recording the most symptomatic patients while ignoring the spread among asymptomatic carriers. 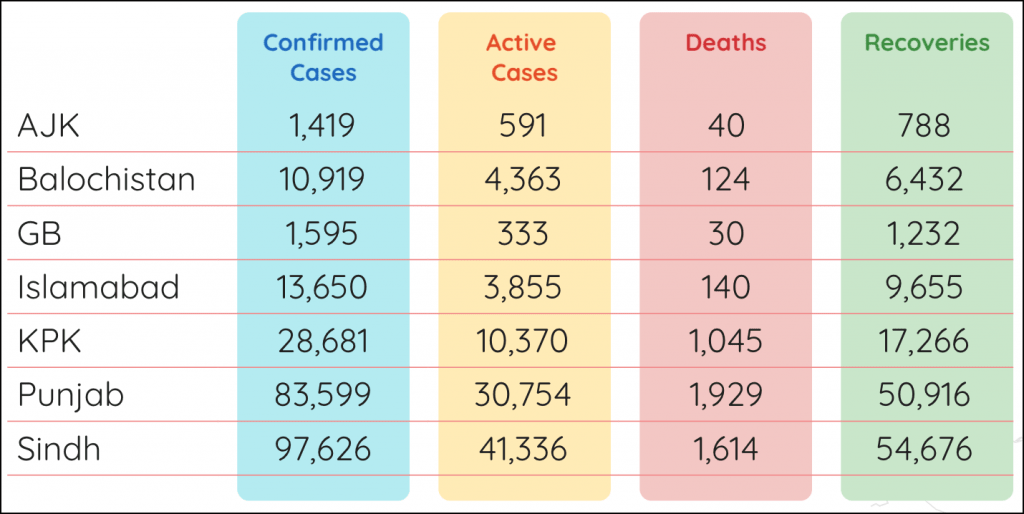 A spokesperson for the provincial health department has told daily Dawn that the province’s daily testing had reduced because it had stopped testing asymptomatic travelers coming from abroad under revised guidelines. Claiming this had reduced testing by around 3,000-4,000/day, he added that removing the requirement of two consecutive negative tests for patients under treatment at hospitals had also reduced the required number of tests.

On Wednesday, authorities reported 30 new deaths due to COVID-19, raising total fatalities to 1,929. The province also reported 930 new infections, raising confirmed cases to 83,599, against 50,916 recoveries. There are now 30,754 active cases of the virus in Punjab province.

The provincial government on Tuesday announced that another 215 personnel of the Sindh police had tested positive for COVID-19 in the past three days, raising to 1,885 the number of cops who have thus far become infected; 16 police personnel have died.

Adviser to the C.M. on Information Ajmal Wazir told a press conference on Tuesday that the province’s daily infection rate had reduced to 15 percent, adding that the fatality had also dropped from 5.2 percent to 3.6 percent. He said currently 244 areas, with a population of 883,390, were under “smart lockdown.” These areas have been placed under stricter restrictions to stem the spread of COVID-19, he said.

The provincial government on Wednesday reported 7 new deaths, raising its death toll to 1,045. In the past 24 hours, its recoveries rose to 17,266, while its confirmed cases have increased by 445 to 28,681. There are currently 10,370 active cases of coronavirus in the province. 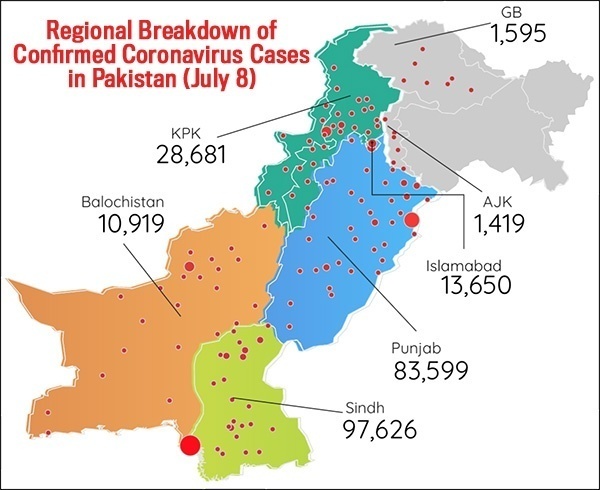 Provincial Chief Secretary Fazeel Asghar has said the number of people testing positive for the novel coronavirus in Balochistan has reduced by half, with only 20 percent of those tested being diagnosed with coronavirus as compared to 40 percent prior to the implementation of government-issued standard operating procedures (SOPs).

Confirmed cases of the novel coronavirus in the province on Wednesday rose by 78 to 10,919. Overall, 124 people have died and 6,432 patients have fully recovered from the virus, leaving 4,363 active cases of COVID-19.

Islamabad on Wednesday raised its confirmed coronavirus cases by 93 to 13,650. There were no new deaths in the past 24 hours, while 252 more people have fully recovered. Overall, 140 people have died due to COVID-19 in the federal capital against 9,655 recoveries, leaving 3,855 active cases of COVID-19.

Confirmed cases of the novel coronavirus in Gilgit-Baltistan rose by 8 on Wednesday to 1,595. The region reported no new deaths, sustaining toll to 30, while its recoveries have increased by 8 to 1,232, leaving 333 active cases.

In Pakistan-administered Kashmir, confirmed cases have increased by 36 to 1,419. There were 4 new deaths and 47 recoveries in the past 24 hours, leaving 40 fatalities and 788 fully recovered. It has 591 active cases of COVID-19.

Globally, the virus has now infected more than 11,950,105 people, with over 546,626 reported deaths. Governments across the word halted flights, locked down towns and cities and urged people to stay at home at the peak of the virus’s spread, but there are now signs of easements in nations that have reined it in to help shuttered economies recover. Overall, around 6,895,545 patients of the 11.9 million+ infected have recovered thus far.