The country’s sharp decline in COVID-19 cases was highlighted by the Wall Street Journal over the weekend, with a report in the U.S. daily noting that authorities were still concerned about the potential fallout of Eidul Azha and Muharram. However, it said, medical experts were all in agreement that there was a visible turnaround.

Critics, meanwhile, continue to warn that Pakistan has yet to fully utilize its claimed testing capacity of 71,780—currently testing significantly below numbers proposed by global health experts—and has yet to ascertain the spread of the virus. According to the World Health Organization, the country is likely only recording the most symptomatic patients while ignoring the spread among asymptomatic carriers.

The province early on Monday issued a notification announcing that it had lifted the “smart lockdown” imposed over Eidul Azha, allowing all shops and markets to reopen from Aug. 3 and not Aug. 5, as earlier notified. The notification said that the public would also be allowed to organize mass rallies on Aug. 5 to mark the first anniversary of India’s revocation of Kashmir’s special constitutional status.

On Monday, authorities reported 4 new deaths due to COVID-19, raising total fatalities to 2,148. The province also reported 24 new infections, raising confirmed cases to 93,197, against 82,563 recoveries. There are now 8,486 active cases of the virus in the province.

Information Minister Syed Nasir Hussain Shah on Sunday warned that the decline in new infections could reverse after Eidul Azha, as there were more reported violations of preventative measures. “We may see a rise in the COVID-19 infections after Eidul Azha… as there are reports that people have violated health guidelines laid down by the government,” he told media in Sukkur.

The provincial government has planned a ‘controlled’ reopening of tourist areas with low coronavirus incidence after Eidul Azha, officials have told daily Dawn. The government had kept the tourist areas closed over Eid to curb the spread of COVID-19—though Prime Minister Imran Khan ignored his own appeals and spent the holiday in the northern areas with his family.

The provincial government on Monday reported 2 new deaths, raising its death toll to 1,202. In the past 24 hours, its recoveries rose by 37 to 29,015, while its confirmed cases have increased by 63 to 34,223. There are currently 4,006 active cases of coronavirus in the province.

Chief Minister Jam Kamal Khan marked Eidul Azha by praying for the prosperity and development of the country. He also urged people to continue following SOPs to curb the spread of COVID-19, saying the threat was not yet over. “May Allah save us from coronavirus and other deadly diseases,” he said.

Confirmed cases of the novel coronavirus in the province on Monday rose by 12 to 11,774. Overall, 136 people have died and 10,189 patients have fully recovered from the virus, leaving 1,449 active cases of COVID-19. 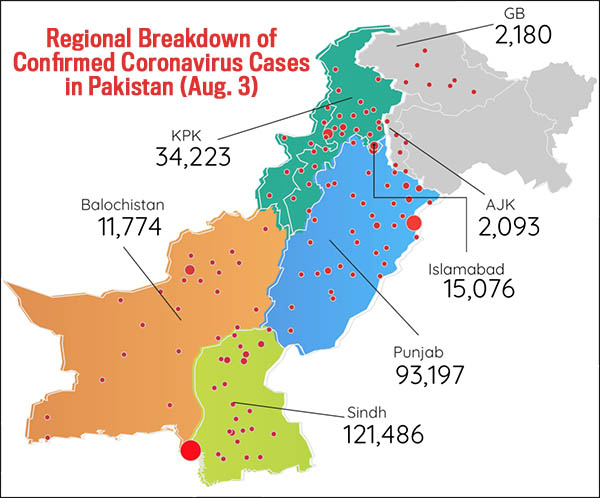 Confirmed cases of the novel coronavirus in Gilgit-Baltistan rose by 23 on Monday to 2,180. The region reported 1 new death, raising toll to 55, while its recoveries have increased by 21 to 1,779, leaving 346 active cases.

In Pakistan-administered Kashmir, confirmed cases have increased by 7 to 2,093. There was 1 death and 1 recovery in the past 24 hours, leaving 54 fatalities and 1,643 fully recovered. It has 396 active cases of COVID-19.

Globally, the virus has now infected more than 18,236,620 people, with over 692,810 reported deaths. Governments across the word halted flights, locked down towns and cities and urged people to stay at home at the peak of the virus’s spread, but there are now signs of easements in nations that have reined it in to help shuttered economies recover. Overall, around 11,446,950 patients of the 18.2 million+ infected have recovered thus far.