The National Command and Operation Center (NCOC) on Wednesday formed a committee to control the spread of misinformation about the novel coronavirus. Led by the interior minister, the committee has been tasked with preparing a legal framework to prevent and counter fake news and suggest penalties against those involved in spreading misinformation.

Health experts, meanwhile, continue to warn that the country is still testing far below its claimed capacity of 71,780—and significantly below the numbers proposed by global health experts—and is likely only recording the most symptomatic patients while ignoring the spread among asymptomatic carriers.

The provincial government is continuing to implement “smart lockdowns” to curb the spread of the novel coronavirus, with authorities in capital Lahore advising it be implemented in seven new areas that have recently witnessed a surge in new infections.

On Thursday, authorities reported 26 new deaths due to COVID-19, raising total fatalities to 1,955. The province also reported 988 new infections, raising confirmed cases to 84,587, against 51,450 recoveries. There are now 31,182 active cases of the virus in Punjab province.

Chief Secretary Mumtaz Ali Shah on Wednesday announced the provincial government has planned to transfer cash to needy people affected by the coronavirus infection, adding Rs. 20 billion had been set aside in the provincial budget for fiscal year 2020-21 for this purpose.

The provincial government on Thursday reported 9 new deaths, raising its death toll to 1,054. In the past 24 hours, its recoveries rose to 18,791, while its confirmed cases have increased by 371 to 29,052. There are currently 9,207 active cases of coronavirus in the province. 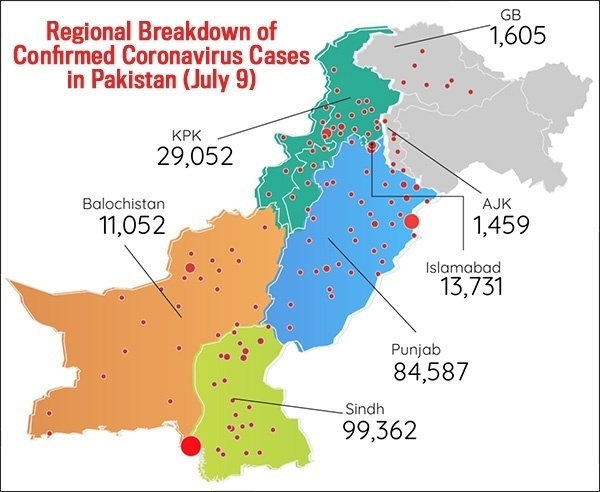 According to the provincial health department, the province’s local transmission of the virus is at 98 percent, while its recovery rate has now increased to 60 percent. Provincial spokesman Liaquat Shahwani has told journalists that the government hopes the positivity ratio will continue to decline in the coming month if citizens fully adopt SOPs for the upcoming Eidul Azha.

Confirmed cases of the novel coronavirus in the province on Thursday rose by 133 to 11,052. Overall, 124 people have died and 6,658 patients have fully recovered from the virus, leaving 4,270 active cases of COVID-19.

Islamabad on Thursday raised its confirmed coronavirus cases by 81 to 13,731. There were 2 deaths in the past 24 hours, while 284 more people have fully recovered. Overall, 142 people have died due to COVID-19 in the federal capital against 9,939 recoveries, leaving 3,650 active cases of COVID-19.

Confirmed cases of the novel coronavirus in Gilgit-Baltistan rose by 10 on Thursday to 1,605. The region reported 1 new death, raising toll to 31, while its recoveries have increased by 40 to 1,272, leaving 302 active cases.

In Pakistan-administered Kashmir, confirmed cases have increased by 40 to 1,459. There were no new deaths and 40 recoveries in the past 24 hours, leaving 40 fatalities and 828 fully recovered. It has 591 active cases of COVID-19.

Globally, the virus has now infected more than 12,166,688 people, with over 552,046 reported deaths. Governments across the word halted flights, locked down towns and cities and urged people to stay at home at the peak of the virus’s spread, but there are now signs of easements in nations that have reined it in to help shuttered economies recover. Overall, around 7,064,772 patients of the 12.1 million+ infected have recovered thus far.