Pakistan on Tuesday recorded 450 infections of the novel coronavirus after conducting 24,231 tests—a positivity ratio of 1.86 percent.

Medical and health experts in the province have again warned of a potential second wave of the coronavirus, cautioning that the public is ignoring preventive measures during Muharram.

According to a senior health official, the provincial government has decided to impose “micro-smart lockdowns” in various neighborhoods of Lahore, Rawalpindi and Gujranwala.

On Tuesday, authorities reported 4 new deaths due to COVID-19, raising fatalities to 2,192. The province reported 158 new infections, raising confirmed cases to 96,391, while its recoveries have increased by 1,128 to 92,289. There are now 1,910 active cases of the virus in the province.

In his daily press briefing on the COVID-19 Chief Minister Murad Ali Shah on Monday said a two percent detection rate had been witnessed in the latest round of testing, a drop from an overall detection rate of 13 percent throughout the pandemic.

The provincial government has decided to shift equipment provided to state-run hospitals for COVID-19 patients to district headquarters hospitals after a rapid decline in the pandemic. The Health Department has said that it is observing the situation until the end of September, but recent trends have indicated the available equipment could soon be allocated for regular use.

The provincial government on Tuesday reported no new deaths, sustaining death toll at 1,248. In the past 24 hours, its recoveries rose by 23 to 33,426, while its confirmed cases have increased by 30 to 35,796. There are currently 1,122 active cases of coronavirus in the province.

Confirmed cases of the novel coronavirus in the province on Tuesday rose by 33 to 12,560. No new deaths were recorded, sustaining fatalities at 141, while 11,460 patients have now fully recovered, leaving 959 active cases of COVID-19. 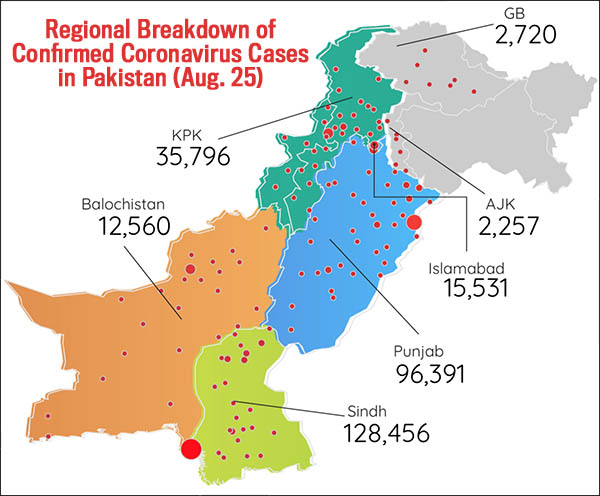 Islamabad on Tuesday raised its confirmed coronavirus cases by 16 to 15,531. There were no new deaths and 63 recoveries in the past 24 hours, sustaining death toll at 175 and raising recoveries to 14,684, leaving 672 active cases.

Confirmed cases of the novel coronavirus in Gilgit-Baltistan rose by 38 on Tuesday to 2,720. The region reported 1 new death, raising toll to 65, while its recoveries have increased by 38 to 2,314, leaving 341 active cases.

In Pakistan-administered Kashmir, confirmed cases have increased by 3 to 2,257. There were no new deaths and 1 new recovery in the past 24 hours, leaving 61 fatalities and 2,071 fully recovered. It now has 125 active cases of COVID-19.

Globally, the virus has now infected more than 23,811,693 people, with over 817,005 reported deaths. Governments across the word halted flights, locked down towns and cities and urged people to stay at home at the peak of the virus’s spread, but there are now signs of easements to help shuttered economies recover. Overall, around 16,360,536 patients of the 23.8 million+ infected have recovered thus far.