Pakistan on Monday recorded 496 infections of the novel coronavirus after conducting 23,655 tests—a positivity ratio of 2.1 percent.

Latest studies have warned that people with uncontrolled and unmanaged blood pressure can develop serious complications, including multi-organ failure, if they contract COVID-19. Health experts have advised people with hypertension to regularly monitor their blood pressure at home and take extra care if they suspect they might have been infected with COVID-19.

The provincial government on Sunday imposed “micro smart lockdown” in several neighborhoods of Lahore, Rawalpindi and Gujranwala for 14 days to curb the spread of COVID-19 after a recent surge in the cases being reported from there. Around 19,538 residents of provincial capital Lahore will be under lockdown for the next two weeks, a notification added.

On Monday, authorities reported no new deaths due to COVID-19, sustaining fatalities at 2,188. The province reported 55 new infections, raising confirmed cases to 96,233, while its recoveries have increased by 11 to 91,161. There are now 2,884 active cases of the virus in the province.

Authorities have shuttered around two-dozen hotels Shogran, Naran and Kaghan and imposed “micro smart lockdowns” after dozens of employees tested positive for the coronavirus. A district government official said that 47 hotel employees had tested positive for COVID-19 in the past few day and had all been quarantined at the hotels where they worked.

The provincial government on Monday reported no new deaths, sustaining death toll at 1,248. In the past 24 hours, its recoveries rose by 39 to 33,403, while its confirmed cases have increased by 46 to 35,766. There are currently 1,115 active cases of coronavirus in the province.

Provincial government spokesperson Liaquat Shahwani has urged the public against becoming complacent, saying on Twitter that the coronavirus is “unpredictable.” In a posting on Sunday, he said “it decreases and immediately increases,” noting that the province had seen only 3 cases on Aug. 3 and then 88 on Aug. 12.

Confirmed cases of the novel coronavirus in the province on Monday rose by 20 to 12,527. No new deaths were recorded, sustaining fatalities at 141, while 11,383 patients have now fully recovered, leaving 1,003 active cases of COVID-19. 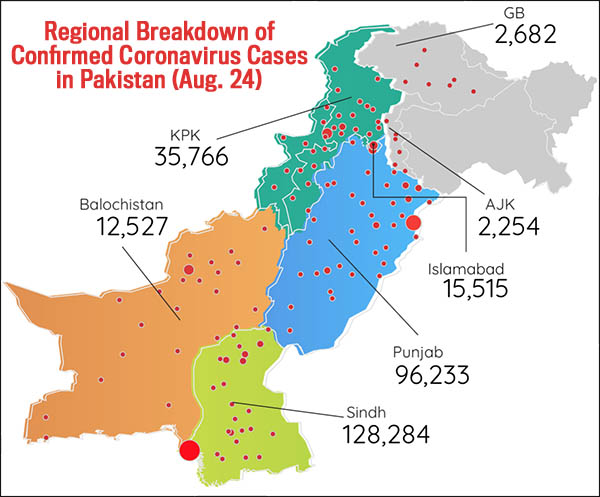 Islamabad on Monday raised its confirmed coronavirus cases by 22 to 15,515. There were no new deaths and 115 recoveries in the past 24 hours, sustaining death toll at 175 and raising recoveries to 14,621, leaving 719 active cases.

Confirmed cases of the novel coronavirus in Gilgit-Baltistan rose by 25 on Monday to 2,682. The region reported no new deaths, sustaining toll at 64, while its recoveries have increased by 7 to 2,276, leaving 342 active cases.

In Pakistan-administered Kashmir, confirmed cases have increased by 9 to 2,254. There were no new deaths or recoveries in the past 24 hours, leaving 61 fatalities and 2,070 fully recovered. It now has 123 active cases of COVID-19.

Globally, the virus has now infected more than 23,586,023 people, with over 812,527 reported deaths. Governments across the word halted flights, locked down towns and cities and urged people to stay at home at the peak of the virus’s spread, but there are now signs of easements in nations that have reined it in to help shuttered economies recover. Overall, around 16,084,558 patients of the 23.5 million+ infected have recovered thus far.