The International Crisis Group, in a report on Pakistan’s coronavirus response, has warned that the country is not out of danger yet. Released last week, the report claims the government’s mixed messaging and misinformation from some religious leaders resulted in many Pakistanis disregarding public health advice. Similarly, it said, public complacency was on the rise because the government has repeatedly ignored the advice of medical experts and eased social distancing measures without sensitizing the citizenry that the pandemic is ongoing.

Pakistan’s welcome decline in daily infections and overall cases, meanwhile, has encountered some trepidation from observers who warn that the country has yet to fully utilize its claimed testing capacity of 68,470—which has actually been reduced from an earlier 71,780—and is currently testing significantly below numbers proposed by global health experts. According to the World Health Organization, Pakistan’s testing policies likely only record the most symptomatic patients while ignoring the spread among asymptomatic carriers. Medical experts have also warned that the government’s decision to end nearly all movement restrictions risks a second wave of the virus.

The provincial government on Sunday issued a notification allowing cinemas and theaters to reopen from today (Monday), requiring strict enforcement of social distancing measures and standard operating procedures (SOPs). It has also required all customers at public places, including restaurants, to be wearing face masks or not be allowed entry.

On Monday, authorities reported 1 new death due to COVID-19, raising total fatalities to 2,170. The province also reported 117 new infections, raising confirmed cases to 94,477, against 86,273 recoveries. There are now 6,034 active cases of the virus in the province.

The provincial government has decided to reopen all business activities in the province from today (Monday), with Chief Minister Murad Ali Shah saying operational times would be extended till 9 p.m. throughout the week. He urged the public to adopt changes to their lifestyles, adding nothing except essential services should be allowed to operate after 10 p.m.

In line with the decisions of the NCOC, the provincial government has announced the resumption of all forms of public transport and has decided to allow restaurants and other public places to resume normal operations, with strict SOPs to prevent a resurgence of COVID-19.

The provincial government on Monday reported 1 new death, raising its death toll to 1,231. In the past 24 hours, its recoveries rose by 70 to 31,612, while its confirmed cases have increased by 57 to 34,692. There are currently 1,849 active cases of coronavirus in the province.

The provincial government on Sunday announced it was lifting restrictions on operational hours for businesses, allowing them to return to pre-pandemic timings. Authorities also announced that they were ending the one-day ‘smart lockdown’ imposed across the province every Friday to curb the spread of COVID-19.

Confirmed cases of the novel coronavirus in the province on Monday rose by 22 to 11,906. Overall, 138 people have died and 10,372 patients have fully recovered from the virus, leaving 1,396 active cases of COVID-19. 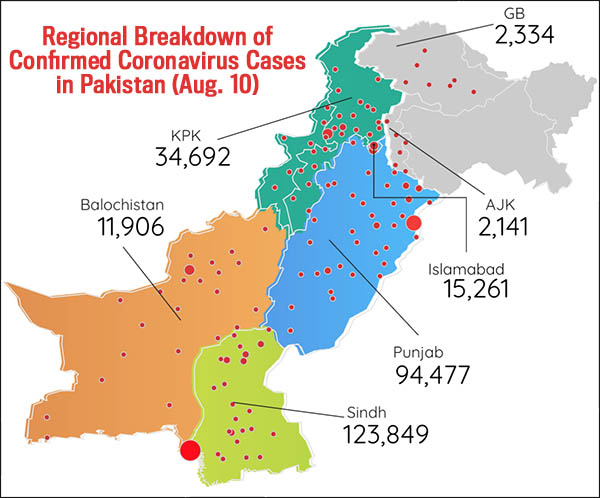 Islamabad on Monday raised its confirmed coronavirus cases by 20 to 15,261. There were no new deaths and 55 recoveries in the past 24 hours, sustaining death toll at 171 and raising recoveries to 12,969, leaving 2,121 active cases.

Confirmed cases of the novel coronavirus in Gilgit-Baltistan rose by 13 on Monday to 2,334. The region reported 2 new deaths, raising toll to 57, while its recoveries have increased by 12 to 1,914, leaving 363 active cases.

In Pakistan-administered Kashmir, confirmed cases have increased by 7 to 2,141. There were no new deaths or recoveries reported in the past 24 hours, leaving 58 fatalities and 1,883 fully recovered. It now has 200 active cases of COVID-19.

Globally, the virus has now infected more than 20,024,265 people, with over 733,995 reported deaths. Governments across the word halted flights, locked down towns and cities and urged people to stay at home at the peak of the virus’s spread, but there are now signs of easements in nations that have reined it in to help shuttered economies recover. Overall, around 12,898,238 patients of the 20 million+ infected have recovered thus far.