There has been a dramatic surge in new cases of COVID-19 in the country since the government ended lockdowns due to the Prime Minister Imran Khan’s insistence that they would lead to more deaths due to hunger than would result from the virus.

On Wednesday, Science and Technology Minister Fawad Chaudhry—who has refused to attend ongoing sessions of Parliament due to social distancing concerns—claimed to local media that nearly a third of lawmakers in the Lower House had now tested positive for COVID-19. “It is getting serious,” he warned.

In the 24 hours preceding 8:30 a.m., Thursday, the country recorded 101 deaths, increasing total deaths to 2,356. In the same time, 2,083 patients tested negative, raising recoveries to 38,391. There are currently 78,789 active cases of the coronavirus in the country, with the National Command and Operation Center reporting 1,681 of them are in critical condition.

Special Assistant to the P.M. on Health Dr. Zafar Mirza on Wednesday dismissed recommendations of the World Health Organization to implement intermittent lockdowns to curb the spread of the virus, claiming the global body was examining the issue through a “health-only” lens, but the government needed to ensure the economy continued functioning. “We cannot sustain lockdowns,” he parroted Prime Minister Imran Khan in a press statement. 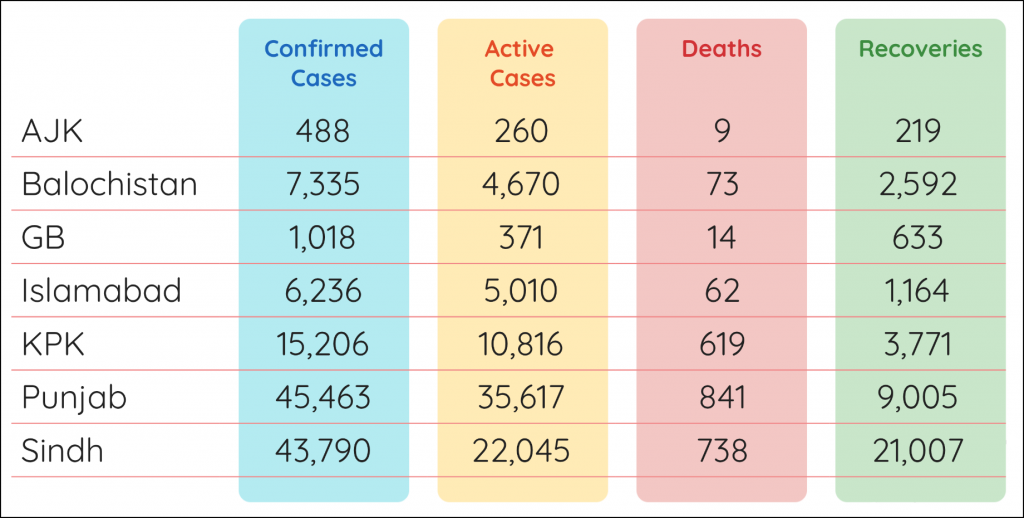 The provincial government on Wednesday imposed a ban on the sale of Actemra in the open market, as it commences trials to treat critical COVID-19 patients with the drug. As demand for the drug has risen with more and more patients ending up in critical care units, prices for it have skyrocketed in the open market, with some reports suggesting vendors were charging 130% more than its value.

On Thursday, authorities reported 34 new deaths due to COVID-19, raising total fatalities to 841. The province also reported 2,003 new infections, raising confirmed cases to 45,463, against 9,005 recoveries. There are now 35,617 active cases of the virus in Punjab province.

Chief Secretary Syed Mumtaz Ali Shah on Wednesday warned that any commercial outlets in the province found violating the Standard Operating Procedures (SOPs) announced by the government to curb coronavirus spread could face penalties of up to Rs. 1 million as well as having their premises sealed. He said the violation of the SOPs would not be tolerated at any cost.

Over 1,000 healthcare providers have been infected with the virus in the province according to a report compiled by federal Health Ministry. Adviser to the C.M. on Information Ajmal Wazir on Wednesday said there was no other option but to follow SOPs, echoing Prime Minister Imran Khan in suggesting the country could not go back to lockdown no matter the situation.

The province reported 9 new deaths on Thursday morning, raising its death toll to 619. In the past 24 hours, its recoveries rose by 140 to 3,771, while its confirmed cases have increased by 679 to 15,206. There are currently 10,816 active cases of coronavirus in the province. 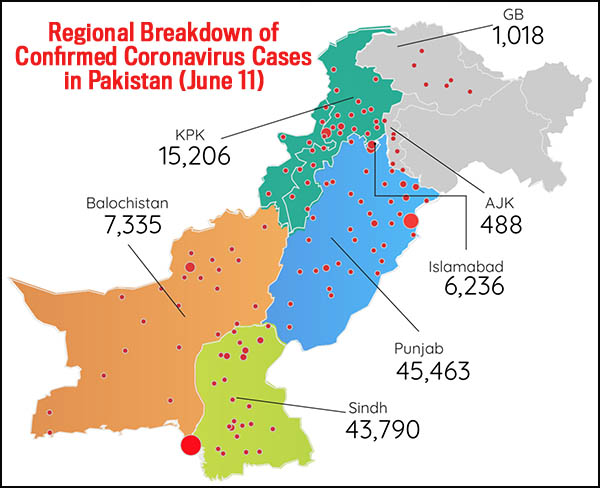 Confirmed cases of the novel coronavirus in the province rose by 304 to 7,335, with 11 new deaths increasing fatalities caused by the disease to 73. Overall, 2,592 patients have recovered from the deadly virus, while there are currently 4,670 active cases of COVID-19.

Confirmed cases of the novel coronavirus in Gilgit-Baltistan rose by 44 to 1,018 on Thursday morning. Overall, the region has thus far reported 14 deaths and 633 recoveries, leaving 371 active cases.

In Pakistan-administered Kashmir, confirmed cases increased by 44 to 488. In the past 24 hours, the region has reported no new deaths and 2 recoveries, leaving 9 deaths and 219 recoveries. There are now 260 active cases of the coronavirus in the region.

Globally, the virus has now infected more than 7,458,640 people, with over 419,000 reported deaths. Governments across the world have halted flights, locked down towns and cities and urged people to stay at home, but there are signs of easements in nations that have reined in the virus’ spread to help shuttered economies recover. Overall, around 3,778,160 patients of the 7.4 million+ infected have recovered thus far.