Planning Minister Asad Umar on Tuesday claimed Pakistan’s “successful” response to the COVID-19 pandemic was the result of Prime Minister Imran Khan’s prioritizing the welfare of the people. “I think the main reason was that Imran Khan thought about these [lower income] people from the start. We took quick and timely decisions and generated employment for people,” he said, adding that the government had managed to curb the spread of the virus and protect the economy from total collapse.

On Wednesday, authorities reported 1 new death due to COVID-19, raising fatalities to 2,186. The province also reported 131 new infections, raising confirmed cases to 95,742, while its recoveries have increased by 1,289 to 90,150. There are now 3,406 active cases of the virus in the province.

Provincial Health Minister Dr. Azra Pechuho on Tuesday said she opposed the reopening of primary and middle schools until the COVID-19 pandemic was over. She said small children cannot be prevented from socializing, nor can it be ensured that they follow standard operating procedures, and warned that this could result in second and third waves of the coronavirus in the country.

The district administration on Tuesday imposed a “micro smart lockdown” in five areas of Mansehra following a spike in coronavirus infections in the region. According to a notification issued by the government, the decision to impose the lockdown was recommended by the district health officer. It said that the entry of people to these localities would be completely banned for everything except essential commodities.

The provincial government on Wednesday reported 3 new deaths, raising death toll to 1,242. In the past 24 hours, its recoveries rose by 125 to 32,647, while its confirmed cases have increased by 64 to 35,401. There are currently 1,512 active cases of coronavirus in the province.

Provincial spokesman Liaquat Shahwani on Tuesday said it was worrying that there had been a surge of new coronavirus infections in the province this past week. He told a press conference that the government had not ruled out another lockdown if the situation did not improve and urged the public to adopt all preventative measures to allow normal life to resume.

Confirmed cases of the novel coronavirus in the province on Wednesday rose by 49 to 12,370. Overall, 139 people have died and 11,241 patients have fully recovered from the virus, leaving 990 active cases of COVID-19. 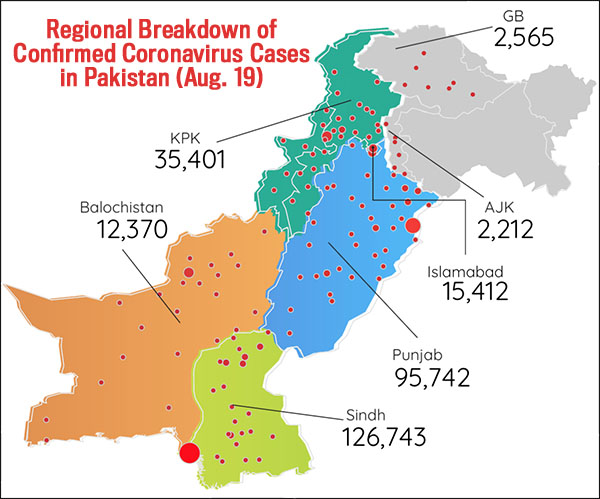 Islamabad on Wednesday raised its confirmed coronavirus cases by 11 to 15,412. There were no new deaths and 182 recoveries in the past 24 hours, sustaining death toll at 175 and raising recoveries to 13,612, leaving 1,625 active cases.

Confirmed cases of the novel coronavirus in Gilgit-Baltistan rose by 27 on Wednesday to 2,565. The region reported 1 new death, raising toll to 62, while its recoveries have increased by 22 to 2,194, leaving 309 active cases.

In Pakistan-administered Kashmir, confirmed cases have increased by 13 to 2,212. There was no new death and 41 recoveries in the past 24 hours, leaving 61 fatalities and 2,043 fully recovered. It now has 108 active cases of COVID-19.

Globally, the virus has now infected more than 22,308,044 people, with over 784,365 reported deaths. Governments across the word halted flights, locked down towns and cities and urged people to stay at home at the peak of the virus’s spread, but there are now signs of easements in nations that have reined it in to help shuttered economies recover. Overall, around 15,050,063 patients of the 22.3 million+ infected have recovered thus far.