Pakistan on Friday reported another 630 infections of the novel coronavirus after conducting 25,613 tests—a positivity ratio of 2.46 percent.

President Arif Alvi praised the government on Thursday for containing the spread of coronavirus, saying its strategy had helped people during testing times. “There was a pressure to impose a total lockdown in the country,” he said during a joint session of Parliament. “[But the government decided] we will not let poor people die of hunger.”

The provincial government has started smart swab sampling to detect coronavirus infections, with authorities instructed to randomly collect samples from every city on a daily basis. According to the provincial health department, it is wrong to believe the virus has been defeated and they have urged the public to exercise caution.

On Friday, authorities reported 2 new deaths due to COVID-19, raising fatalities to 2,188. The province also reported 158 new infections, raising confirmed cases to 95,958, while its recoveries have increased by 23 to 90,233. There are now 3,537 active cases of the virus in the province.

Chief Minister Murad Ali Shah announced in his daily briefing on Thursday that thus far 926,051 tests for the virus had been conducted across the province, with 14 percent of them resulting in positives for COVID-19.

The provincial government on Friday reported 1 new death, raising death toll to 1,243. In the past 24 hours, its recoveries rose by 182 to 32,893, while its confirmed cases have increased by 77 to 35,545. There are currently 1,409 active cases of coronavirus in the province.

Confirmed cases of the novel coronavirus in the province on Friday rose by 21 to 12,424. Overall, 139 people have died and 11,294 patients have fully recovered from the virus, leaving 991 active cases of COVID-19. 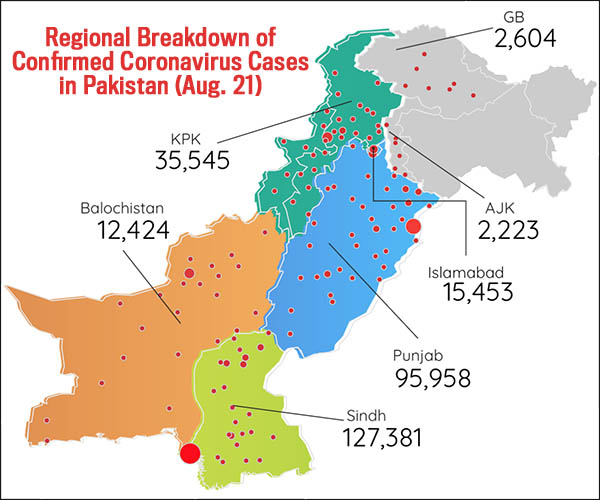 Islamabad on Friday raised its confirmed coronavirus cases by 28 to 15,453. There were no new deaths and 265 recoveries in the past 24 hours, sustaining death toll at 175 and raising recoveries to 14,101, leaving 1,177 active cases.

Confirmed cases of the novel coronavirus in Gilgit-Baltistan rose by 21 on Friday to 2,604. The region reported no new deaths, sustaining toll at 63, while its recoveries have increased by 11 to 2,235, leaving 306 active cases.

In Pakistan-administered Kashmir, confirmed cases have increased by 4 to 2,223. There was no new death and 9 recoveries in the past 24 hours, leaving 61 fatalities and 2,066 fully recovered. It now has 96 active cases of COVID-19.

Globally, the virus has now infected more than 22,862,465 people, with over 797,117 reported deaths. Governments across the word halted flights, locked down towns and cities and urged people to stay at home at the peak of the virus’s spread, but there are now signs of easements in nations that have reined it in to help shuttered economies recover. Overall, around 15,517,694 patients of the 22.8 million+ infected have recovered thus far.