Pakistan on Thursday recorded 756 infections of the novel coronavirus after conducting 31,862 tests—a positivity ratio of 2.37 percent.

The National Command and Operation Center (NCOC) has issued guidelines for public gatherings ahead of planned protests by the united opposition’s Pakistan Democratic Movement. Under the standard operating procedures (SOPs) provided, in Punjab all venues must only have 50 percent occupancy, while speakers must have tested negative for COVID-19 no later than 72 hours prior to the event.

Pakistan is currently in the midst of what health authorities have warned could be a second wave of the virus. Daily infections and deaths are once more on the rise, raising fears that disease is making a comeback as the public becomes more apathetic toward social distancing measures. Meanwhile, the country has yet to fully utilize its claimed testing capacity of 72,232 and is currently testing significantly below numbers proposed by global health experts. According to WHO, Pakistan’s testing policies likely only record the most symptomatic patients while ignoring the spread among asymptomatic carriers, which recent studies have suggested comprise the majority of infections in the country. 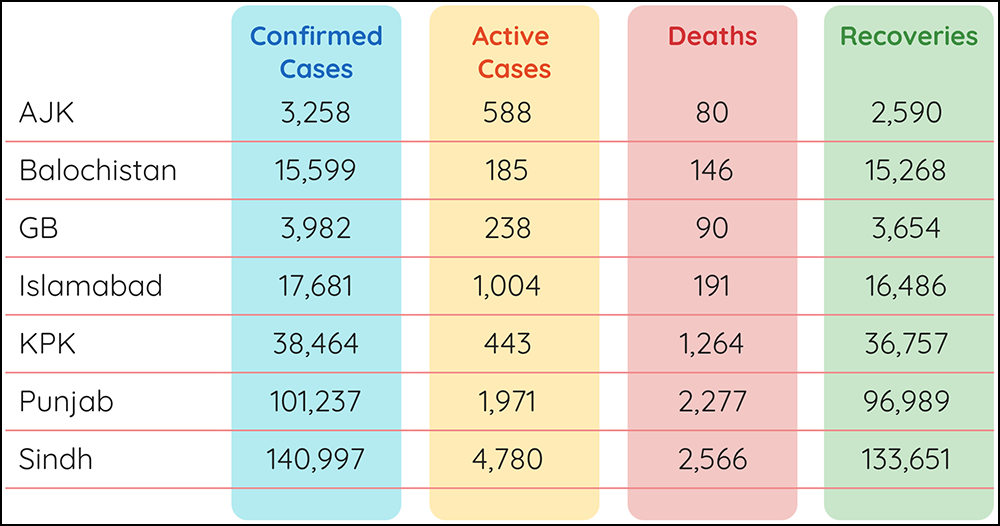 Provincial Governor Chaudhry Sarwar on Wednesday announced that the government would recognize everyone who had fought the COVID-19 pandemic in Pakistan with the Shaan-e-Pakistan Award, to be distributed in the last week of October. He said everyone who had worked to curb the spread of novel coronavirus, including those assisting poor families, would be awarded.

On Thursday, authorities reported 7 new deaths due to COVID-19, raising fatalities to 2,277. The province raised its confirmed cases to 101,237 with 223 new infections. Meanwhile, its recoveries have increased by 17 to 96,989. There are now 1,971 active cases of the virus in the province.

The provincial government on Thursday reported no new deaths, sustaining toll at 1,264. In the past 24 hours, its recoveries rose by 55 to 36,757 while its confirmed cases have increased by 37 to 38,464. The province currently has 443 active cases of coronavirus.

The province has raised its confirmed cases to 15,599 with 22 new infections. There were no new deaths and 32 recoveries in the past 24 hours, sustaining fatalities at 146 and raising recoveries to 15,268. There are now 185 active cases of COVID-19 in the province.

Confirmed cases of the novel coronavirus in Gilgit-Baltistan on Thursday increased by 17 to 3,982. The region reported no new deaths or recoveries, sustaining toll at 90 and 3,654, respectively. There are currently 238 active cases of COVID-19 in the region.

In Pakistan-administered Kashmir, confirmed cases have increased by 60 to 3,258. There were 17 recoveries and no deaths in the past 24 hours, leaving 80 fatalities and 2,590 fully recovered. It now has 588 active cases of COVID-19.

Globally, the virus has now infected more than 38,746,513 people, with over 1,096,881 reported deaths. Governments across the word halted flights, locked down towns and cities and urged people to stay at home at the peak of the virus’s spread, but have since eased restrictions to help shuttered economies rebound. Overall, around 29,126,752 patients of the 38.7 million+ infected have recovered thus far, with health experts warning of an impending second wave as winter approaches.