Planning Minister Asad Umar on Thursday announced that the government was ending a majority of restrictions imposed to curb the spread of the coronavirus, including allowing dine-in services at restaurants and cafés, and allowing gyms, public parks, cinemas and arcades to reopen from Aug. 10. He said tourist destinations would be allowed to resume operations from Aug. 8 and also announced lifting of restrictions on transport services.

Pakistan’s welcome decline in daily infections and overall cases, meanwhile, has encountered some trepidation from observers who warn that the country has yet to fully utilize its claimed testing capacity of 68,470—which has actually been reduced from an earlier 71,780—and is currently testing significantly below numbers proposed by global health experts. According to the World Health Organization, Pakistan’s testing policies likely only record the most symptomatic patients while ignoring the spread among asymptomatic carriers.

The province has witnessed a sudden increase in new COVID-19 infections after Eidul Azha, with cases rising from a daily average of less than 100 to around 300 yesterday. Medical experts say this was expected and have urged the public to adopt preventative measures to prevent a second wave of the virus.

On Friday, authorities reported 2 new deaths due to COVID-19, raising total fatalities to 2,164. The province also reported 193 new infections, raising confirmed cases to 94,040, against 86,085 recoveries. There are now 5,791 active cases of the virus in the province.

Provincial Education Minister Saeed Ghani on Thursday stressed that the government was the only competent authority to allow educational institutions to reopen and warned private schools that strict action would be taken against anyone who tried to resume operations before Sept. 15.

The provincial health department has directed public sector hospitals to resume limited outpatient services with coronavirus-related SOPs in light of a decline in COVID-19 cases. Outpatient departments and elective services had been shut in the province since March 31.

The provincial government on Friday reported 4 new deaths, raising its death toll to 1,219. In the past 24 hours, its recoveries rose by 624 to 30,681, while its confirmed cases have increased by 73 to 34,432. There are currently 2,532 active cases of coronavirus in the province.

The province has not reported any new deaths due to COVID-19 since July 22, the first region of the country to do so. Earlier this week, it extended until Aug. 17 it’s ongoing “smart lockdown,” with a notification maintaining that this was necessary for the “safety of human lives.” Under the extended restrictions, all people have to wear face masks in public; there is a ban on gatherings of more than 10 people and sit-ins and processions at public places; more than two people cannot travel in the same car.

Confirmed cases of the novel coronavirus in the province on Friday rose by 28 to 11,821. Overall, 137 people have died and 10,267 patients have fully recovered from the virus, leaving 1,417 active cases of COVID-19. 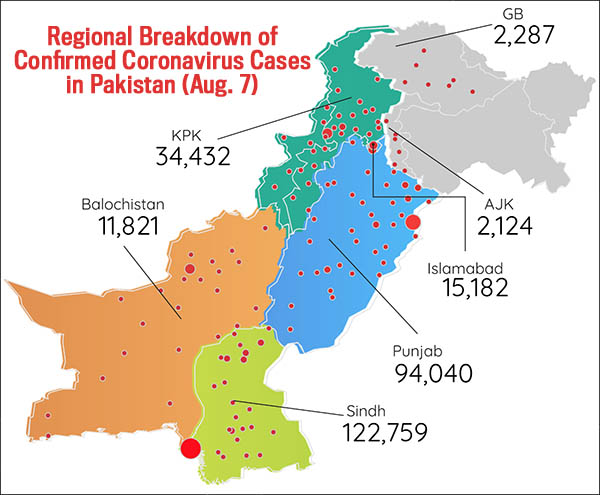 Islamabad on Friday raised its confirmed coronavirus cases by 41 to 15,182. There were 3 new deaths and no recoveries in the past 24 hours, raising death toll to 170 and sustaining recoveries at 12,833, leaving 2,179 active cases.

Confirmed cases of the novel coronavirus in Gilgit-Baltistan rose by 53 on Friday to 2,287. The region reported no new deaths, sustaining toll at 55, while its recoveries have increased by 15 to 1,861, leaving 371 active cases.

In Pakistan-administered Kashmir, confirmed cases have increased by 8 to 2,124. There were 2 new deaths and 18 recoveries in the past 24 hours, leaving 57 fatalities and 1,854 fully recovered. It has 213 active cases of COVID-19.

Globally, the virus has now infected more than 19,260,188 people, with over 717,704 reported deaths. Governments across the word halted flights, locked down towns and cities and urged people to stay at home at the peak of the virus’s spread, but there are now signs of easements in nations that have reined it in to help shuttered economies recover. Overall, around 12,360,424 patients of the 19.2 million+ infected have recovered thus far.