Prime Minister Imran Khan on Monday warned the public that if they ignored social distancing guidelines and standard operating procedures over Eidul Azha and Muharram, there was a great risk of a renewed surge in the country’s coronavirus infections. “We are not yet out of danger,” he stressed, as he urged people to celebrate the upcoming Eid with ‘simplicity.’

The provincial government on Monday announced it was shutting down all shopping malls and markets under its jurisdiction from midnight last night to Aug. 5. According to a notification issued by the health department, the decision was taken to curb the spread of the novel coronavirus during the upcoming Eidul Azha.

On Tuesday, authorities reported 9 new deaths due to COVID-19, raising total fatalities to 2,125. The province also reported 206 new infections, raising confirmed cases to 92,279, against 81,265 recoveries. There are now 8,889 active cases of the virus in the province.

The Sindh Assembly on Monday passed an amendment to the Sindh COVID-19 Emergency Relief Bill 2020, making it mandatory for citizens to wear masks in public places. The amendment also states that any employed person would be permitted paid leave for the duration of their isolation if they test positive for COVID-19.

The NCOC on Monday, following a special session in Peshawar, acknowledged the efforts of the provincial government to contain the COVID-19 pandemic. However, Planning Minister Asad Umar cautioned that care should be taken to prevent any tourism from other provinces during the upcoming Eidul Azha. He said a final decision on reopening the tourism sector would be taken after Eid.

The provincial government on Tuesday reported 2 new deaths, raising its death toll to 1,180. In the past 24 hours, its recoveries rose by 77 to 27,196, while its confirmed cases have increased by 113 to 33,510. There are currently 5,134 active cases of coronavirus in the province. 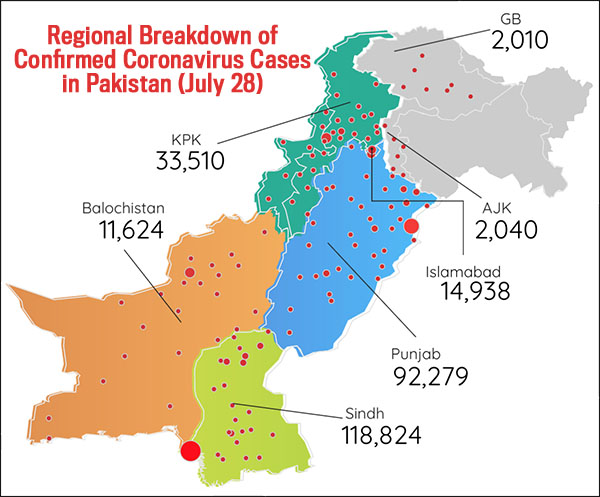 Confirmed cases of the novel coronavirus in the province on Tuesday rose by 23 to 11,624. Overall, 136 people have died and 10,023 patients have fully recovered from the virus, leaving 1,465 active cases of COVID-19.

Confirmed cases of the novel coronavirus in Gilgit-Baltistan rose by 21 on Tuesday to 2,010. The region reported no new deaths, sustaining toll at 48, while its recoveries have increased by 47 to 1,613, leaving 349 active cases.

In Pakistan-administered Kashmir, confirmed cases have increased by 6 to 2,040. There were no new deaths and 33 recoveries in the past 24 hours, leaving 49 fatalities and 1,482 fully recovered. It has 509 active cases of COVID-19.

Globally, the virus has now infected more than 16,652,435 people, with over 656,678 reported deaths. Governments across the word halted flights, locked down towns and cities and urged people to stay at home at the peak of the virus’s spread, but there are now signs of easements in nations that have reined it in to help shuttered economies recover. Overall, around 10,242,655 patients of the 16.6 million+ infected have recovered thus far.